Bishop Joseph Strickland: The Rosary Of The Blessed Virgin Mary

Nikki Haley: ‘The Gov’t Ended Up Helping a Lot of People They Shouldn’t Have’ in COVID-19 Stimulus Bills 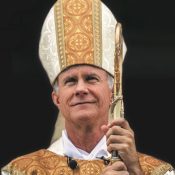 In the year 2002, now Pope St. John Paul II wrote an apostolic letter entitled, in English, “The Rosary of the Blessed Virgin Mary” (Rosarium Virginis Mariae). I highly recommend this beautiful letter to all Catholics who want to come to a deeper understanding of the origins and the power of this beautiful prayer and devotion. I also recommend this letter to our Christian friends in other communities who want to understand the reason that Catholics pray the rosary.

“The Rosary belongs among the finest and most praiseworthy traditions of Christian contemplation. Developed in the West, it is a typically meditative prayer, corresponding in some way to the ‘prayer of the heart’ or ‘Jesus prayer’ which took root in the soil of the Christian East…in the East, the most characteristic prayer of Christological meditation, centered on the words ‘Lord Jesus Christ, Son of God, have mercy on me, a sinner,’ is traditionally linked to the rhythm of breathing; while this practice favors perseverance in the prayer, it also in some way embodies the desire for Christ to become the breath, the soul and the ‘all’ of one’s life” (St. John Paul II).

Though the Rosary of the Blessed Virgin Mary has come to be embraced mostly in the Western Catholic Christian tradition, the Latin Rite, the use of a rope of prayer beads or knots for prayer stretches much further back, to the earliest centuries of the once undivided Christian Church.

A corded rosary began to be used by monks and pilgrims who sought to respond to the admonition of the Apostle Paul in his admonition to the Thessalonians to pray “without ceasing” (1 Thess. 5:17).

The same Apostle Paul told the Roman Christians that “when we know not how to pray, the Spirit comes to help us in our weakness” (Romans 8:26). These early Christians believed that we are called to live in a state of constant prayer and communion with the Lord.

Do we still believe this? I hope so.

Early Christian monks and pilgrims began to pray the name of Jesus, over and over throughout their day to deepen their ongoing communion with the Lord. Much as a child speaks of memorization as coming to know something “by heart,” the idea was to make this presence of — and communion with — the Lord Jesus, a matter of the heart. That is why the Jesus Prayer is referred to as the prayer of the heart in many references.

Thus, what has been called the “Jesus Prayer” became a popular practice among the Christian faithful. It has continued throughout the centuries, in the Eastern Christian Churches, both Orthodox and Catholic. The practice offers several forms or variations of this prayer, “Lord Jesus Christ, Son of the Living God, have mercy on me a sinner.” The use of a corded rope accompanied the practice.

The Way Of The Pilgrim

In the nineteenth century, a beautiful little book entitled The Way of a Pilgrim told the story of a pilgrim who walked across Russia practicing ceaseless inner prayer and communion with the Lord in this manner. The focus of this prayer is not on the repetition of the words but on the power of the very name of Jesus, the Savior, in whom we are invited to live our lives. Concerning the practice of the Jesus prayer the Pilgrim wrote in his diary:

“And that is how I go about now, and ceaselessly repeat the Prayer of Jesus, which is more precious and sweet to me than anything in the world. At times I do as much as 43 or 44 miles a day, and do not feel that I am walking at all. I am aware only of the fact that I am saying my Prayer.

“When the bitter cold pierces me, I begin to say my Prayer more earnestly, and I quickly become warm all over. When hunger begins to overcome me, I call more often on the Name of Jesus, and I forget my wish for food. When I fall ill and get rheumatism in my back and legs, I fix my thoughts on the Prayer, and do not notice the pain. If anyone harms me I have only to think, ‘How sweet is the Prayer of Jesus!’ and the injury and the anger alike pass away and I forget it all . . . I thank God that I now understand the meaning of those words I heard in the Epistle — ‘Pray without ceasing’.”

In his now fifty-year-old book entitled The Orthodox Church, then Timothy Ware wrote about his own spiritual journey to the Christian faith. The author became an Orthodox Christian as he began to explore Orthodox Christianity. He would later proceed to ordination to the priesthood and assume the Office of Bishop as Bishop Kallistos.

He wrote these words concerning the practice of the Jesus Prayer:

“There is another type of personal prayer which has for many centuries played an extraordinarily important part in the life of Orthodoxy — the Jesus Prayer: ‘Lord Jesus Christ, Son of God, have mercy on me a sinner’….As a help in reciting this prayer many Orthodox use a rosary, differing somewhat in structure from the Western rosary; an Orthodox rosary is often made of wool, so that unlike a string of beads it makes no noise.

“The Jesus Prayer is a prayer of marvelous versatility. It is a prayer for beginners, but equally a prayer that leads to the deepest mysteries of the contemplative life. It can be used by anyone, at any time, in any place: standing in queues, walking, traveling on buses or trains; when at work; when unable to sleep at night; at times of special anxiety when it is impossible to concentrate upon other kinds of prayer.

“For some there comes a time when the Jesus Prayer ‘enters into the heart,’ so that it is no longer recited by a deliberate effort, but recites itself spontaneously, continuing even when a man talks or writes, present in his dreams, waking him up in the morning. In the words of St. Isaac the Syrian: ‘When the Spirit takes its dwelling-place in a man he does not cease to pray, because the Spirit will constantly pray in him. Then, neither when he sleeps, nor when he is awake, will prayer be cut off from his soul; but when he eats and when he drinks, when he lies down or when he does any work, even when he is immersed in sleep, the perfumes of prayer will breathe in his heart spontaneously’.”

The Rosary Of The Blessed Virgin Mary

So, the use of prayer beads or a corded rosary has exceedingly early roots in Christian history. It is tactile, as is much of early Christian worship, bringing the body into the practice of prayer and piety. The repetition is meant not to promote monotony, but to promote meditation and ever deepening contemplation. Some sources say that the earliest rosaries in Europe were comprised of strings of beads called Pater-nosters, the Latin words for the Our Father.

One tradition attributes the popularity of the practice to St. Dominic who died in 1221. He is said to have had a vision of the Blessed Virgin Mary. At the time, an errant teaching was infecting the Church. It was fostered by a group called the Albigensians who denied much about who Jesus Christ truly was — and is. Dominic and his brothers would travel as mendicants, preaching the truths of the Catholic Christian faith and teaching the Christians of that day the truth by having them pray the rosary and reflect on the mysteries of the faith.

This practice evolved between the twelfth and fifteenth century into a form much akin to the current Rosary of the Blessed Virgin Mary. The Hail Mary Prayer was recited and linked with the Our Father and Psalms. The person engaging in the prayer practice would reflect upon the life of Jesus and His Mother Mary. The prayer practice came to be called “Rosarium” (rose garden) and the structure of the rosary gradually evolved between the twelfth and fifteenth centuries. Eventually 50 Hail Mary’s were recited and linked with verses of psalms or other phrases evoking the lives of Jesus and Mary.

During the fifteenth century, Christians in Europe had their own version of Islamic terrorism as fierce and militant Muslims from the Turkish Empire invaded Eastern Europe. In 1453, Constantinople had already fallen to these same Muslims. As they began to raid the coast of Italy, in 1571, Pope Pius V organized a fleet which was placed under the command of Don Juan of Austria, the half-brother of King Philip II of Spain. The ships flew under a blue banner flag depicting Jesus Christ Crucified.

The Pope asked the faithful to pray the rosary and ask the Blessed Mother to intercede for the protection of the Holy Church. He spoke of her under the title of Our Lady of Victory. Although the invading Muslims way outnumbered the Christian forces, on October 7, 1571, the invading Muslim forces were defeated at the Battle of Lepanto. A year later, Pope St. Pius V established the Feast of the Holy Rosary on October 7. On that day, the Catholic Christian faithful were invited to remember the victory by giving thanks to the Lord and remember the powerful intercessory prayer of Mary, His Mother.

By the sixteenth century, the practice of a five-decade rosary with reflections on the mysteries of the Christian faith had developed.