The world’s smallest baby boy to survive a premature birth went home Tuesday after several months in a Tokyo hospital.

The boy was born at 24 weeks gestation. That’s a little over five months into a pregnancy, usually considered the age of viability in the U.S.

Doctors determined his life was in danger after he failed to continue growing in-utero, the Japan Times reported. He was born via emergency cesarean section in August.

At birth he weighed 9.45 ounces — just over half a pound. As the BBC noted, that’s the weight of a large onion. Now he weighs 7 pounds.

In the U.S., survival rates for infants born between 22 and 24 weeks are improving, according to 2017 study. The study found that between 2000 and 2011, the percentage of surviving babies born this early increased from 30 to 36 percent. The percentage that survived without “neurodevelopmental impairment” went from 16 to 20 percent.

In Tokyo, Dr. Takeshi Arimitsu, who treated the tiny boy, had this to say: “I want people to know that babies can return home vigorous even if they are born small.”

He Could Have Been Legally Killed

Take a look at this picture of the Tokyo boy, tweeted by KTLA: 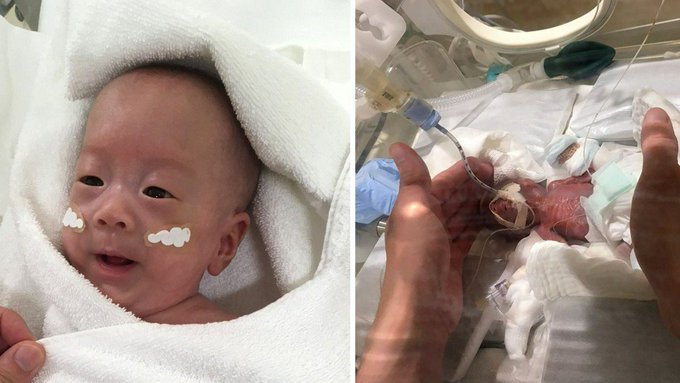 Under Roe v. Wade, women can obtain abortions up to viability, which is usually considered between 24 and 28 weeks, although babies even younger can also survive. In short, it’s legal to kill babies like this little Tokyo fighter. (And thanks to the Senate’s failure to pass the Born-Alive Abortion Survivors Protection Act this week, nothing would stop medical professionals from neglecting an infant like him had he been born in a failed abortion, rather than an emergency c-section.)

Many states have attempted to ban abortion before viability — for instance, at six weeks, when a heartbeat can be detected via ultrasound, or at 20 weeks, when science shows babies can feel pain. But when these laws have been challenged in court, they’ve been struck down, thanks to Roe.

That’s 41 out of 50 states allowing the abortion of children who are statistically proven to be capable of surviving outside the womb.

After 24 Weeks, He Still Could Have Been Killed

As bills in New York, Virginia and the U.S. Senate have recently reminded us, abortion doesn’t stop at viability. The Supreme Court also stipulates that abortion must also be legal after viability if the mother’s life or health (mental or physical) is considered to be in danger.

“I want people to know that babies can return home vigorous even if they are born small.” — Dr. Takeshi Arimitsu

But don’t believe that late-term abortions only take place under life, health and “fetal anomaly” exceptions. According to a 2013 study, “data suggest that most women seeking later terminations are not doing so for reasons of fetal anomaly or life endangerment.” (Emphasis added.) In the study, “later terminations” are defined as abortions at 20 weeks or later.

The CDC says that in 2015, 1.3 percent of U.S. abortions took place after 21 weeks. Perhaps 1.3 percent doesn’t sound like a lot, but that equals more than 8,000 babies. More than 8,000 babies aborted at or incredibly near the age that others have been able to survive outside the womb. (The earliest survivor was born at 21 weeks, 4 days.)

Medical advancements are making it possible for younger and younger (and smaller and smaller) babies to have a fighting chance at life outside the womb. The little Tokyo champ serves as a happy reminder of this. But recent debates about abortion laws remind us that in the U.S., we’re actively — legally — killing thousands of them.

May Americans continue waking up to this grim and inexcusable reality.

Liberty McArtor is a freelance writer in the great state of Texas, where she lives in the Dallas-Fort Worth metroplex with her husband, son, and their very friendly cat.

She contributes to The Stream covering topics she’s passionate about — life, family, religious freedom, and living faithfully for Christ — and has spoken about her writings on multiple talk radio shows around the nation.

Liberty earned her bachelor’s degree in journalism from Patrick Henry College and previously worked in Washington, D.C., as a radio producer at WMAL.