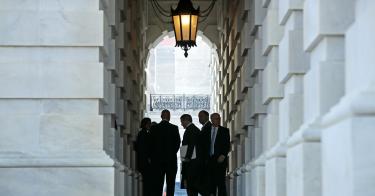 The Senate impeachment rules provide that the chamber must suspend its legislative and executive business while the trial is under way.

The trial should not affect the Supreme Court’s oral argument schedule.

The House of Representatives has chosen members to participate in the Senate impeachment trial of President Donald Trump, and they have presented the articles of impeachment to the Senate.

Here are eight things you need to know as the Senate prepares to begin Trump’s impeachment trial.

1. When Will the Trial Begin, and How Long Will It Last?

Roberts, in turn, administered the oath to all senators. Senate Majority Leader Mitch McConnell, R-Ky., announced that the trial itself will begin at 1 p.m. Tuesday.

The Clinton impeachment took five weeks, and Johnson’s lasted 11 weeks. The Senate’s impeachment trial rules, adopted in 1986, mandate that the trial should begin at noon and last until the Senate decides to adjourn, Monday through Saturday, “until final judgment shall be rendered.” ….