Deacon Keith Fournier has had a front row seat in the charismatic movement of the late twentieth century.

Part 2 in a series on “Pentecost and the Holy Spirit Today.” Read Part 1.

Most Christians have a narrow view of what the activity of the Holy Spirit looks like. Scenes of loud music and big hair likely come to mind more readily than the reverent chants of Franciscan brothers. These popular notions may be mistaken.

For decades, Keith Fournier has traversed the divides between Catholics and Protestants. Today, he’s a voice for the common good of Christianity in society. His early faith journey led him into the nascent charismatic Catholic renewal.

The Gifts Were in OperationIn the mid-1970’s, his friend Father Michael Scanlan urged Fournier to enroll at Franciscan University of Steubenville, Ohio. Thousands of students there had begun to experience the Holy Spirit. “We saw changed lives,” recalls Fournier. “The charismatic gifts were in operation — prophecy, healing and the like. I realized the power of the Holy Spirit was not reserved for the early church.” Criticisms came swiftly. Some objected on theological grounds, others to the uninhibited worship atmosphere. “Well-intended friends of mine said, Oh, your church is not going to accept all this stuff,” says Fournier. “Then Pope Paul VI calls all charismatic Catholics to Rome. He welcomes them in, and they’re all singing in tongues in St. Peter’s Basilica! The barriers many expected weren’t there.”

Today, as a deacon in the Roman Catholic Diocese of Richmond, Virginia, Fournier has a long track record of reaching across dividing lines. Before Steubenville, he attended an Assemblies of God Bible college. Decades later, after law school, he and Pat Robertson co-founded the American Center for Law and Justice in Virginia.

Professor Scot McKnight of Northern Seminary has seen a curious phenomenon in recent years. “Some of my seminary students have become Roman Catholic, and most of them are charismatic as well,” he says. “What I’ve noticed about charismatic Catholics is that they’re not as crazy. I don’t see the extreme edges among the Catholics that I see among some of the Pentecostal types.”

Though McKnight ministers mostly among evangelicals, he has a deep appreciation for Catholic forms of worship. “The sacraments of baptism and the Lord’s Supper are means by which the Spirit speaks to us,” he says.

The professor of New Testament notes that most church growth worldwide is among Spirit-filled believers. “People who are filled with the Spirit are missionally driven,” he says. “They are also, in that sense, charismatically attractive because people sense the presence of God — something beyond and more than what they’re used to seeing.”

McKnight adds: “Their faith is not just liturgy or religion, it’s not just church or institution — it’s something real, tangible and experienceable.”

His passion remains leading others into a Spirit-filled Christian walk. “It’s the Holy Spirit who guides us into prayer and into all holiness,” he says. “The early missionary efforts of the church relied completely on the power of the Holy Spirit. I don’t believe the Holy Spirit ever left the Church.”

Surprisingly, an evangelical scholar agrees with the Catholic Fournier. “If we look at Church history, we see God continued to work miracles through the centuries,” says author Dr. Michael Brown. “The New Testament explicitly says we should earnestly seek the best gifts. It tells us to pursue prophecy and not to forbid tongues.”

“It warns us against putting out the Spirit’s fire,” he adds. Those flames of belief are often lit at a young age. They were for the young Keith Fournier.

The Hippie Who Found a Higher Purpose

Keith Fournier grew up in an Irish-French Catholic family. He attended a parochial school not far from his Boston home. “I’ll always remember a nun I had in second grade, Sister Patricia,” he says. “She told me I could talk to Jesus as a friend and, if I listened real carefully, I could hear Him respond.”

Life took a turn after a fire destroyed their family home. His parents walked away from practicing faith in the late 60’s, leaving Fournier to his own searching. “I became a teenage hippie,” he recalls. “I got caught up in trying to change the world through politics and all the emerging spirituality of those days.”

Hearing of Woodstock and promises of free love, he hitchhiked across the country in his bell-bottom blue jeans and army jacket. “When I hit California at age 17, it was a treacherous and scary time,” he says. “My parents were worried sick.” At the same time, a Jewish friend of his named Fred had journeyed to Israel to find his roots.

One day, Fournier received an envelope postmarked Jerusalem, Israel. “I went on to the beach and read the letter from Fred,” he recalls. “It began with words from Psalm 119: How can a young man keep his way pure?”

The handwritten pages struck a chord in him. “My Jewish friend went on to tell me he had come to know Yeshua, Jesus, as His Messiah,” says Fournier. The California nomad recalls falling on his knees in the sand. He’s regarded that prayer as a turning point ever since. He tells the story in his book Evangelical Catholics.

Though his spiritual encounter was simple, changes were evident in his life. “There was the quickening of hunger for the word of God,” he says. “The pages just came on fire. I wanted to know more and more about God. I began to read the gospels.”

It also hinted at Fournier’s later ministry bringing together people of faith. “It took the witness of a Jewish friend who went to Jerusalem and gave his life to Yeshua,” observes Fournier. “If he hadn’t told me I could know Jesus as a friend, I would’ve forgotten that Sister Patricia had told me the same thing as a boy.”

A Language Beyond UnderstandingMany evangelicals point to the Great Awakenings or Azusa Street in 1912 as the origin of the charismatic movement. Fournier and Brown go back centuries earlier — seeing the Holy Spirit’s activity as continuous since the early Church. “When you look at the writings of the early fathers, there is a clear theology of the Holy Spirit and recognition these gifts are available,” Fournier says. 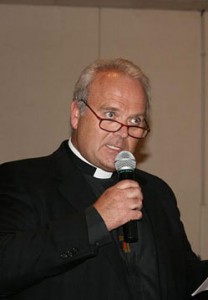 Both scholars bring up the writings of Origen and Thomas Aquinas, among others. “Into the third and fourth centuries, you still have accounts of miraculous healings and deliverance from demons,” says Brown. “Augustine did not initially believe miraculous healing was for today. In City of God, he states how they documented more than 70 miracles in less than two years. It actually changed his theology.”

Moving from California to Florida, 17-year-old Keith Fournier discovered a spiritual gift he had never encountered. Friends invited him to a small home prayer meeting. “That evening, I listened to them pray in a language I didn’t understand,” he says. “They knew I was intrigued. They said, ‘You know, the Lord can give you a language of prayer. Once you start praising, just let the Holy Spirit lead you.’”

Friends pointed him to Romans chapter eight. For we do not know what to pray for as we ought, but the Spirit himself intercedes for us with groanings too deep for words, it states. They introduced him to glossolalia, the gift of tongues — one of the most misunderstood spiritual manifestations.

Fournier replied simply to his friends: “Sure, if it’s more of God, I want it.” They laid hands on him and prayed over him. “Once again, I had an encounter with the Lord,” he recalls. “I experienced what I would later find out was called the gift of tongues. This was before I’d even heard of ‘baptism in the Spirit.’”

While many consider the experience bizarre, Brown offers his perspective. “First Corinthians 12 tells us the gifts are given for the common good,” he says. “Speaking in tongues is the one gift mentioned as a way to build ourselves up. When I pray in tongues on a daily basis, I may be interceding for others as well. In the process, I am building myself up by communing ‘Spirit to spirit.’”

“Even as we count it a joy to be used by God, the gifts are for the benefit of others.”

Fournier’s Surprising Great Pentecostal FigureFor Fournier, entering a charismatic Protestant Bible college in Florida led him a step closer to the church of his childhood. The friends in that home prayer meeting had urged him to enroll. Now he faced an assignment: giving a presentation on a great Pentecostal figure.

“My professor assumed I would go to Azusa Street or one of the other recent revivals covered in class,” he says. “But the first one who popped into my head was Saint Francis of Assisi. The Spirit-filled Franciscan movement set the church on fire during that time.”

“Saint Francis of Assisi and the brothers regularly spoke about singing in the language of angels,” recounts Fournier. “They used to pray over whole towns before they went in by extending their hands. They clearly had the Holy Spirit working in their lives.”

“Francis and the brothers regularly spoke about singing in the language of angels,” recounts Fournier. “They used to pray over whole towns before they went in by extending their hands. They clearly had the Holy Spirit working in their lives.”

Somewhat to the chagrin of his Assemblies of God professor, young Fournier gave his presentation on Saint Francis. “Giving due respect to Azusa Street and the other signposts my evangelical and Protestant friends point to, we have to go beyond that narrow understanding,” he says. “We need to realize we have a 2,000 year history!”

With his varied faith journey, Deacon Keith Fournier could author quite a tell-all. “I’ve thought about writing Confessions of a Charismatic, Pentecostal, Evangelical Catholic Christian,” he says. “But really I’m simply a follower of Jesus empowered by the Holy Spirit. We have to get rid of the adjectives.”

Learn more about Deacon Keith Fournier at Common Good. Scot McKnight’s Open to the Spirit and Michael Brown’s Playing with Holy Fire are now available. Watch for further interviews in future parts of this series.