When experts talk about addiction, they often refer to it as a mechanism to cope with deep traumatic emotional wounds from early childhood, such as abuse, neglect divorce, family addiction, etc.  Because of their wounds, these people struggle with much shame that also fuels their addiction. Thus, a large part of recovery consists of identifying and healing these emotional wounds and their associated shame. This can lead to healthy long-term recovery.  However, in recent years, because of internet pornography addiction, this model for understanding addiction has been challenged.

In studying those who struggle with pornography addiction, researchers found that many people, especially young people, did not struggle with many deep emotional wounds.  These people, like Kevin, came from healthy intact families with loving parents and siblings.  There were no major traumas in their lives.  So, the questions arose, “how did these people become addicted to internet pornography?”

The answer to this question is early and consistent exposure.  Today, the average age of exposure to hard-core internet pornography is 8.  Many people who become addicted to internet pornography were exposed to it at an early age.  Kevin was first exposed to internet pornography on a friend’s phone at age 10.  In addition, they had regular access to it.  At first Kevin was able to access pornography daily on his unmonitored smartphone.  After his parents placed parental controls on his phone, Kevin went out and bought an inexpensive tablet.  He was then able to tap into the wi-fi at home and view pornography without his parents’ knowledge.  It is early and consistent exposure that can hardwire a child’s brain to become addicted to the rush of dopamine it triggers.  As the brain becomes dependent on the neurochemical stimulation caused by pornography, it needs a daily dose of it just to function.  This can lead a person back to it over and over again.  We call this Opportunity Induced Addiction.  In addition to pornography, this kind of addiction can develop with video games, social media, and online gambling.

As noted above, many addicted people struggle with a deep shame from past emotional wounds.  This fuels their addiction.  However, rather than developing from deep emotional wounds, with opportunity induced addiction, the shame develops as a result of the addiction.  Kevin knew he was hooked on porn, but was too ashamed to seek help.  He feared what his parents would think of him if they ever found out about his struggle.  This shame kept him from being able to turn to his parents for help and it fueled his addiction.  In this case, the shame leads to the inability to seek help.  This in itself is a deep emotional wound.  Below are diagrams that depict how these addictions develop. 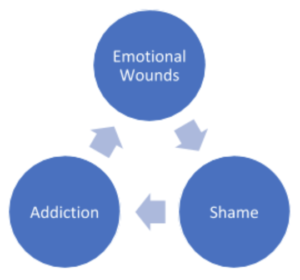 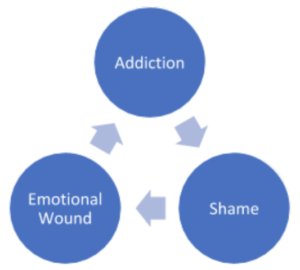 In each case, it’s the shame and emotional wounds that fuel the addiction.

Treatment for both types of addiction includes counseling.  However, with opportunity induced addiction, rather than trying to identify deep emotional traumas from early childhood, counseling often focuses on healing the current parent-child relationship and releasing any shame associated with the addiction.  Through this process, Kevin was able to turn to his parents for help in recovery.  They were able to work together to develop the safeguards Kevin needed for his sobriety.  They were also able to talk regularly about any struggles he was having.  This enabled Kevin to succeed in achieving healthy long-term recovery from internet pornography addiction.  If you or someone you love is struggling with pornography use, it’s important to seek help.  There are effective recovery programs that can lead to freedom from pornography.  For more information, log onto www.PeterKleponis.com.