In it, the Big Bang Theory star details her personal journey through “an industry that profits on the objectification of women.” She recounts the pressure she felt to be prettier, even when she was starting out as a pre-teen actress. Her parents told her to make “conservative choices,” such as avoiding make-up and not allowing people to call her “baby.”

She admits that physically, she isn’t a “perfect ten.” An “upside” to that is that men don’t ask her “to meetings in their hotel rooms.” Bialik, who also has a Ph.D in neuroscience, says she still makes “self-protecting and wise” decisions. Such as not flirting, dressing modestly, and saving sexuality for privacy.

“Nothing — absolutely nothing — excuses men for assaulting or abusing women,” she writes toward the end. “But we can’t be naive about the culture we live in.”

“It’s Not About the Clothes”

The response to Bialik’s piece was swift and severe. Several other prominent female figures accused her of victim blaming. They rejected the notion that women’s clothing, appearance or behavior solicit assault.

Actress Gabrielle Union shared with her own story.

“I got raped at work at a Payless shoe store. I had on a long tunic and leggings,” she tweeted. In another tweet she added, “Though I was raped … at gunpoint … I was still asked by a female ‘friend’ what I had worn.”

Though I was raped by a stranger who raped me at gunpoint after robbing the store, I was still asked by a female “friend” what I had worn

Writer G. Willow Wilson also criticized Bialik’s piece. “Respectfully, this doesn’t work,” she tweeted. A Muslim, Wilson noted that she has been harrassed despite covering her entire body. “Have friends in niqab who get harassed,” she wrote. A niqab is a face-covering veil worn by some Muslim women.

Respectfully, this doesn’t work. I cover my entire body+hair+ get harassed. Have friends in niqab who get harassed. https://www.nytimes.com/2017/10/13/opinion/mayim-bialik-feminist-harvey-weinstein.html?_r=0 …

Opinion | Mayim Bialik: Being a Feminist in Harvey Weinstein’s World

I have always had an uncomfortable relationship with being employed in an industry built on the objectification of women.

Actress Patricia Arquette strongy condemned Bialik’s take. On Twitter, she described sexual harassment she experienced at 12. “It’s not the clothes,” she wrote.

.@missmayim I have to say I was dressed non provocatively at 12 walking home from school when men masturbated at me. It’s not the clothes.

Model and actress Emily Ratajkowski was especially harsh toward Bialik. She characterized Bialik’s piece as telling women they shouldn’t try to be pretty if they don’t want to get harassed. “This isn’t feminism,” she tweeted. 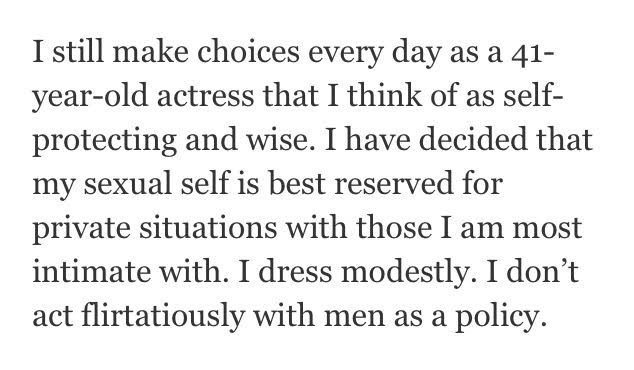 So @missmayim “advice” is: I was never pretty & never tried to be & ladies, take note if you don’t want to be harassed? This isn’t feminism

Responding to the Backlash

Despite the backlash, Bialik tweeted that her piece “resonated with so many.” 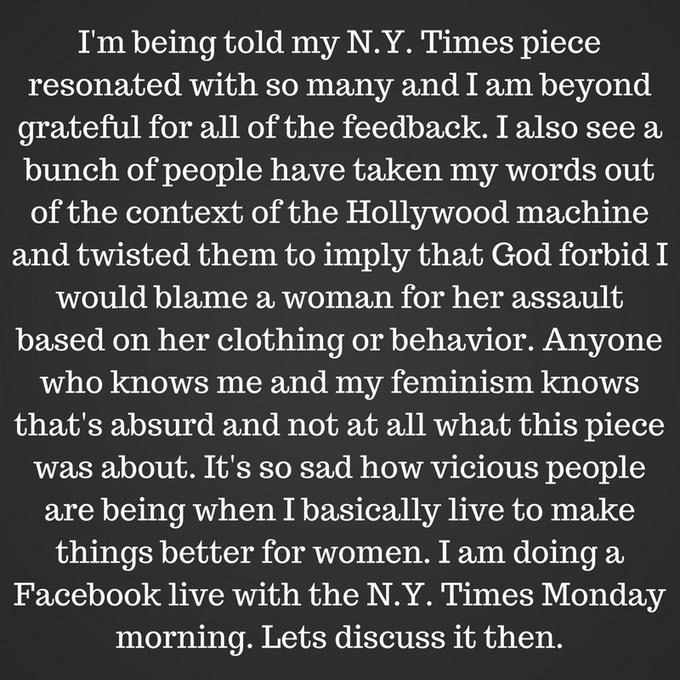 Being told my @NYTimes piece resonated w/ so many. Also see some have taken my words out of the context of the Hollywood machine. See below:

But she also acknowledged the “vicious” response by some readers. On Monday the observant Jew and self-proclaimed feminist attempted to clarify her intentions. She appeared in a Facebook live video with New York Times writer Bari Weiss. (Link below.)

“It has become clear to me that there are people who think that I either implied or overtly stated that you can be protected from assault by the clothing you wear or the behavior that you exhibit,” she said. “That is absolutely not what my intention was.” She added that “there is no way to avoid being the victim of assault by what you wear or the way you behave.”

“For me,” she said with emphasis, “I feel protected in my industry more when I keep parts of me private.”

It’s on Men and Women

In addition to her op-ed, Bialik and Weiss discussed the actress’s views on feminism, inclusion and how both men and women are responsible for fighting sexual assault. “It’s on men and it’s on women to protect each other,” Bialik said.

Bialik went on to describe herself as both a “bleeding heart liberal” and a social conservative. She said she understands how that is hard for some people, including other women, to grasp.

Is there a place in the mainstream feminist movement for women with socially conservative views? Weiss asked.

“Well, I think this article has proven, maybe not,” Bialik laughed. She went on say she thinks women of diverse views can work together. She said she hopes for a day when women can act and dress how they want without fear of being assaulted.

“I really hope to be included in further conversations” on the topic, she said.