Ladies, Let Men Be Gentlemen. They Need It, by Jennifer Hartline “He who is prudent and lies in wait for an enemy who is not will be victorious.” Sun Tzu

One minute it was sunny, the next all wind, hail and fury.

For two years, the media has been saying Mueller would be the storm that blows this White House down.

What did Mueller bring? Process crimes rooted in entrapment. Manafort nailed on charges the FBI had already investigated and let go, charges connected to lobbying he did in partnership with Clinton machine stalwarts Tony and John Podesta. Flynn guilty of a lie the agents who interviewed him said wasn’t a lie. A few Russians as likely to be convicted as Chris Matthews is likely to dance with the Bolshoi Ballet. Nothing on collusion. Mueller had nothing on Trump.

Rachel Maddow, CNN and the rest of the mainstream media spent the weekend sniffling like they were watching Sophie’s Choice. On Capitol Hill, the same people who wanted to carve Mueller’s face on Mount Rushmore now want to carve him up in Congressional hearings. Oh, the disappointment. No mighty wind of justice blowing Trump and his kids out of the Swamp and into prison.

So what Storm was the heavens signaling?

Trump’s counter-punch against the Deep State.

Return now to 1974. The Rumble in the Jungle. Mohammed Ali squaring off against the fearsome heavyweight champ George Foreman. George Foreman in 1974 was not the genial giant you see grilling burgers. George Foreman was a powerful, very scary dude. His glare alone should have been registered as a lethal weapon. Mike Tyson bit somebody’s ear? You’d rather bite your own ear than have Foreman hit you.

The great Ali was actually a 4-to-1 underdog. But he had a strategy. An insane strategy. He would let Foreman hit him, and hit him, and hit him. But he would be leaning against the ropes at an angle where the force of the blows would pass through his body, absorbed by give in the ropes. Ali called the strategy “Rope-a-Dope.” Foreman would punch himself out in the heat, and then Ali would take him out. The plan worked beautifully. Ali knocked Foreman out in the 8th round. They don’t call Ali “The Greatest” for nothing.

For two years and in round after round after round of cable panels and political attacks, Trump has been hit. Hit hard. Hit incessantly. Hit below the belt. Hit with this Trump-Collusion charge that was the creation of a cabal of DOJ/FBI/CIA officials in conjunction with the Obama White House.

Well, now they’re punched out. The lies have wilted in the heat. Trump is still standing.

And now it’s time for the biggest mouth since Ali to launch his counter attack.

Those who’ve been following closely know this counter as “The Storm.”

For all his supposed impulsiveness, President Trump has great patience when it counts. Be it real estate — waited years before he could get Mar-a-Lago at millions less than its appraised value. Be it the Presidency — waited decades to run. And certainly during this Mueller investigation. Remember all the leaks about Mueller investigating Trump’s children? Knowing collusion was a hoax, an effort was made to goad Trump into firing Mueller, which would have immediately been called obstruction of justice. He didn’t bite. He bided his time.

In recent months, supporters have been clamoring for Trump to fully declassify the FISA Warrants the FBI/DOJ got on campaign adviser Carter Page. But Trump has held back. An old tweet, inspired by Sun Tzu, tells us why.

Move slowly, carefully — and then strike like the fastest animal on the planet!

11.9K people are talking about this

But now it’s time to strike.

What will the declassified FISA warrants tell us:

It’s time for DOJ’s Inspector General Michael Horowitz to drop his second major report on the FBI/DOJ shenanigans during and after the 2016 election. The first laid out the shady handling of the Clinton Email Server investigation. This one deals with the birth and execution of the Trump-Russia investigation.

In addition to the FISA abuse in the Carter Page case, Horowitz is believed to be examining, among other things:

Take something relatively simple: Andrew McCabe reportedly told associates “First we f*** Michael Flynn. Then we f*** Trump.” Comey boasted that Flynn was not treated the way interviews with White House personnel were normally treated. (So much for Obama’s call for doing things “by the book.”) Peter Strzok and a fellow agent, who actually did the interview, didn’t think Flynn lied. So how does he end up getting charged by Mueller with lying? Where are the original 302s?

While we’re on the subject: How did Michael Flynn’s name get unmasked? His conversation with the Russian ambassador was recorded. Americans caught in taps aren’t supposed to be identified.

Horowitz has about 470 lawyers and investigators at his disposal. By comparison, Mueller had about 60. This is a massive undertaking. So when will we see the report? Originally, it was supposed to be shortly after the IG report on the Hillary investigation. But that was a year ago.

Any criminal referrals that Horowitz has come up with have been going to U.S. Attorney John Huber in Utah.

Last March, former Attorney General Jeff Sessions made a startling announcement. He revealed he had assigned longtime federal prosecutor John Huber to help prosecute cases arising out of Horowitz’s investigation. In fact, Huber had already been on the task for four months.

What’s Huber been doing the past year and a half? No one seems to know. Sara Carter worries Huber might have been named by Sessions just to avoid having to name a second special counsel, and really isn’t doing anything. Huber was scheduled to speak to House Oversight committee in December, but backed out.

However, legal expert Jonathan Turley thought the appointment of Huber could be a “brilliant move.” Turley told Fox Business News, “What he did is he essentially combined the powers of the inspector general with the powers of a line prosecutor.” So why Huber? Huber’s out in Utah. In other words, far away from the Swamp in fly-over country.

As Breitbart put it:

As a U.S. attorney, Huber has full authority to empanel a grand jury and to file criminal charges. A grand jury can be empaneled anywhere, which means that it could be a group of citizens from deep-red Utah – in the heart of Trump country – instead of the D.C. Swamp that decides whether to hand down indictments for felony prosecution.

If Huber’s appointment was just for show, why hide it for months? And why not simply pick a U.S. Attorney close to the Swamp or other media centers?

In November, ABC News reported on dozens of sealed indictments added to the Federal court docket in D.C. in 2018. Very unusual they said. They speculated the cases had something to do with Mueller. Now we know from Mueller that no more indictments are coming. So what are those indictments about?

But that’s Washington, not Utah. Yes, but we also know that at least one related case is being handled in Connecticut. Specifically, the leak investigation of former FBI general counsel James Baker. Whose to say there aren’t Storm related indictments across the country?

What we do know is stuff is hitting the fan with the DOJ and FBI. We’ve already described how Lisa Page and Andrew McCabe pointed fingers at the Obama Justice Department for the Clinton Investigation. Is DOJ going to take the fall for Russia too? Who are they going to point to? Will the FBI take the fall for the FISA abuse? For the Russia hoax?

No. Of course not. Ultimately, they’re going to point to the Obama White House and John Brennan, former director of the CIA. Even ABC News’ Terry Moran said Monday, “John Brennan has a lot to answer for.” 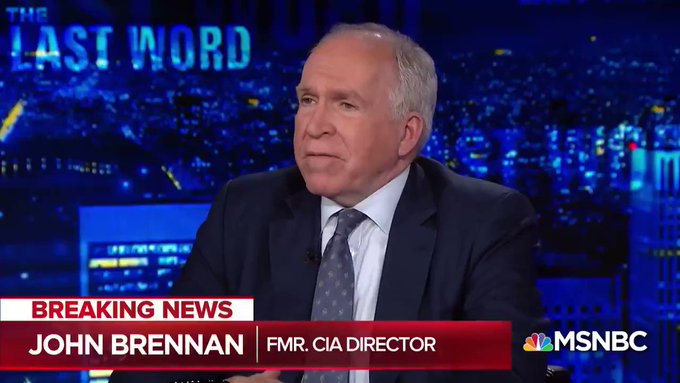 Terry Moran – ✔@TerryMoran – John Brennan has a lot to answer for—going before the American public for months, cloaked with CIA authority and openly suggesting he’s got secret info, and repeatedly turning in performances like this……

So does someone else. As Ari Fleisher asked, “What did Barack Obama know and what and when did he authorize it?”

Ari Fleischer – ✔@AriFleischer – Now that Mueller says there was no collusion, it is time to scrutinize the Obama Administration. They spied on a US campaign, wiretapped Americans, bit on the dossier and unmasked Flynn. What did Barack Obama know and what and when did he authorize it?……

Lisa Page provided an answer. Just days after the official opening of Peter Strzok’s Russia investigation, she was preparing to brief FBI director James Comey, “(because) potus wants to know everything we are doing.”

Investigator Chris Farrell of Judicial Watch has laid out numerous points of intersection between Obama and the nefarious goings-on in 2016. Just this morning, I wrote again about the January 5, 2017 White House meeting, and the dissemination of the false Russian narrative.

To paraphrase Bob Dylan, you don’t need a weatherman to know which way the Storm is blowing.

We leave the last word to the President from earlier today.

There are a lot of people out there that have done some very, very evil things, very bad things. I would say treasonous things against our country. … We’ve gone through a period of really bad things happening. Those people will certainly be looked at. I’ve been looking at them for a long time and I’m saying why haven’t they been looked at?

I will tell you, I love this country. I love this country as much as I can love anything. My family, my country, my God. But what they did, it was a false narrative. It was a terrible thing. We can never let this happen to another president again.

President Trump is still standing. And it’s his turn to rumble.