Why Women Get Abortions by Human Life International January 31st is the feast day of St. John Bosco.  John Bosco (also called Don Bosco) was a Catholic priest who lived in Italy in the 19th century. He is most famous for his work with troubled, city-dwelling male youth who became disenfranchised following the Industrial Revolution, and who often ended up living a life of petty crime.

Fr. Bosco formed a club of sorts for these boys called the “Oratory”.  He catechized them in the faith and instructed them along the path of virtue, often using sports as a teaching tool. The small band of boys eventually grew to 700.  After facing many obstacles, John Bosco eventually founded the Salesian Society, named after St. Francis de Sales, which saw to the founding of Salesian Homes for boys where they could live and be educated. 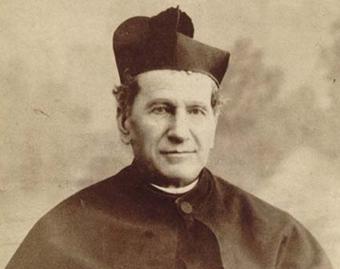 St. John Bosco was perhaps so dedicated to his task because of a dream he had about his life’s work.  St. Bosco dreamed of a prison filled with young boys which caused him much distress.  He wrote of the dream,

“To see so many boys, from 12 to 18 years of age, all healthy, strong, intelligent, insect bitten, lacking spiritual and material food, was something that horrified me . . . I must by any available means prevent boys ending up here.” 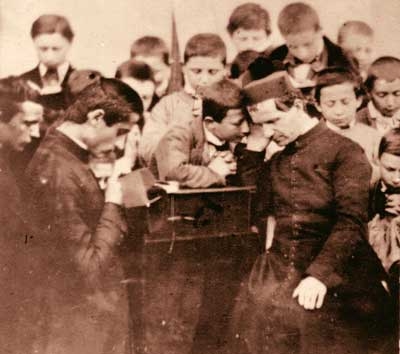 In his dream, when some of these boys were abused for their crimes, he heard it said to him, “Not with blows, but with charity and gentleness must you draw these friends to the path of virtue.”  St. Bosco took this dream as his life’s mission. At the time of Don Bosco’s death in 1888 there were 250 homes for boys founded by the Salesian Society containing 130,000 children; of these, over 6,000 became priests.  The Salesian Society still exists today and is the second largest religious order in the world, continuing St. Bosco’s mission of helping and educating poor and disenfranchised youth.

The Prophecy of the Two Columns

St. Don Bosco is also known for his many prophetic dream… His most famous dream regards future troubles for the Church and is known as the Prophecy of the Two Columns.  In his words, here is the dream: “Try to picture yourselves with me on the seashore, or, better still, on an outlying cliff with no other land in sight. The vast expanse of water is covered with a formidable array of ships in battle formation, prows fitted with sharp spear-like beaks capable of breaking through any defense. All are heavily armed with cannons, incendiary bombs, and firearms of all sorts – even books – and are heading toward one stately ship, mightier than them all. As they try to close in, they try to ram it, set it afire, and cripple it as much as possible. 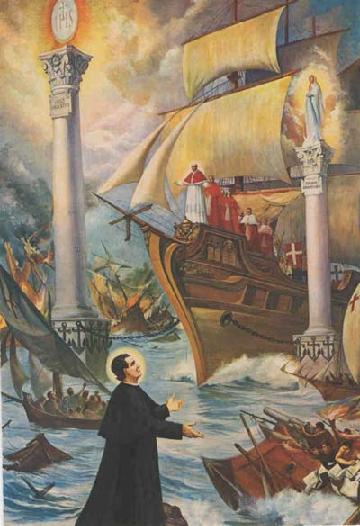 “This stately vessel is shielded by a flotilla escort. Winds and waves are with the enemy. In this midst of this endless sea, two solid columns, a short distance apart, soar high into the sky: one is surmounted by a statue of the Immaculate Virgin at whose feet a large inscription reads: Help of Christians; the other, far loftier and sturdier, supports a [Communion] Host of proportionate size and bears beneath it the inscription Salvation of believers.

“The flagship commander – the Roman Pontiff [the Pope]- seeing the enemy’s fury and his auxiliary ships very grave predicament, summons his captains to a conference. However, as they discuss their strategy, a furious storm breaks out and they must return to their ships. When the storm abates, the Pope again summons his captains as the flagship keeps on its course. But the storm rages again. Standing at the helm, the Pope strains every muscle to steer his ship between the two columns from whose summits hang many anchors and strong hooks linked to chains.

“The entire enemy fleet closes in to intercept and sink the flagship at all costs. They bombard it with everything they have: books and pamphlets, incendiary bombs, firearms, cannons. The battle rages ever more furious. Beaked prows ram the flagship again and again, but to no avail, as, unscathed and undaunted, it keeps on its course. At times a formidable ram splinters a gaping hole into its hull, but, immediately, a breeze from the two columns instantly seals the gash.

“Meanwhile, enemy cannons blow up, firearms and beaks fall to pieces, ships crack up and sink to the bottom. In blind fury the enemy takes to hand-to-hand combat, cursing and blaspheming. Suddenly the Pope falls, seriously wounded. He is instantly helped up but, struck down a second time, dies. A shout of victory rises from the enemy and wild rejoicing sweeps their ships. But no sooner is the Pope dead than another takes his place. The captains of the auxiliary ships elected him so quickly that the news of the Pope’s death coincides with that of his successor’s election. The enemy’s self-assurance wanes.

“Breaking through all resistance, the new Pope steers his ship safely between the two columns and moors it to the two columns; first to the one surmounted by the Host, and then to the other, topped by the statue of the Virgin. At this point something unexpected happens. The enemy ships panic and disperse, colliding with and scuttling each other. Some auxiliary ships which had gallantly fought alongside their flagship are the first to tie up at the two columns.

“Many others, which had fearfully kept far away from the fight, stand still, cautiously waiting until the wrecked enemy ships vanish under the waves. Then, they too head for the two columns, tie up at the swinging hooks, and ride safe and tranquil beside their flagship. A great calm now covers the sea.”

And in conclusion to this dream:

“Very grave trials await the Church. What we have suffered so far is almost nothing compared to what is going to happen. The enemies of the Church are symbolized by the ships which strive their utmost to sink the flagship. Only two things can save us in such a grave hour: devotion to Mary and frequent Communion. Let us do our very best to use these two means and have others use them everywhere.”

Many interpret John Bosco’s vision as regarding the trials the Church has endured, and is continuing to endure, at the dawn of the third millennium; namely, rampant secularism and apostasy which has led to attacks against the Church and Her teachings. St. Don Bosco, pray for us! 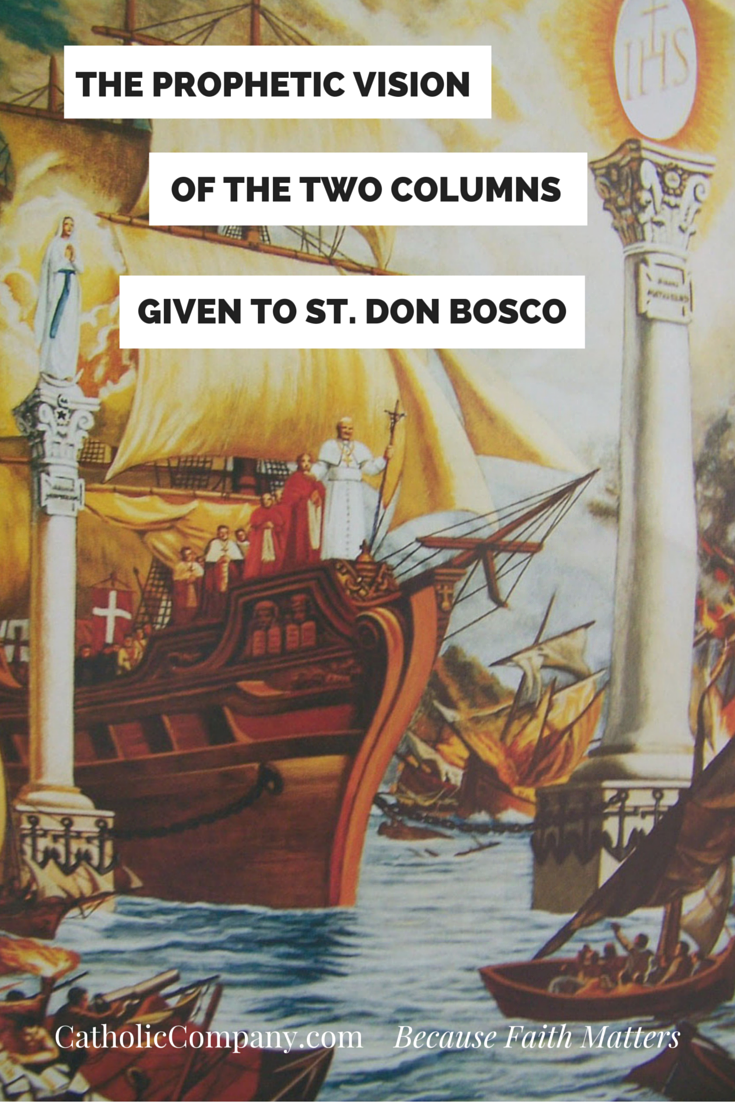 This article has been updated and was originally published in January 2013. © The Catholic Company. All rights reserved.