Msgr. Charles Pope: Supreme War: A Reflection on the Battle for the Supreme Court Pope Francis is celebrating the anniversary of his own sermon five years ago at Lampedusa, Italy. When Francis arrived at the small, poor Sicilian city overwhelmed by African economic migrants, his message for Westerners was fierce. Even “judgmental.” There was not a nuance in sight. Francis compared those who resist the mass influx of poor people into developed countries to the bloody tyrant Herod and the brother-killer Cain.

Last year, Jason Jones and I addressed an “Open Letter” to Francis on this point. We wrote:

This is frankly unfair, and deeply misleading. Was Cain protecting the common good when he slaughtered Abel? Was Herod concerned for the religious liberty and civic peace of Bethlehem when he butchered its infants? Yet those of us who differ with your optimism about mass Muslim immigration found ourselves linked to each of those villains in your remarks. We do not think it wise or prudent to reward migrants for making a potentially deadly journey to Europe on makeshift boats with the “prize” of long-term residence and public support — a prize which cannot help but encourage millions of others to attempt the same deadly journey, to lands that do not require their labor and are already suffering from the intolerance and militancy of resurgent political Islam.

Put On Blinders, and Let the Elites Lead You

But reality-based, prudential arguments fall on deaf ears with liberal Christians when their pet issues are the ox logic gores. They simply forbid you to consider the almost-certain effects of extending “compassion” to their victim group of choice. (In this case economic immigrants.) Instead they expect you to slap on a set of blinders, and only consider one person in the equation: the would-be immigrant.

Nobody else counts. Not the poorest citizens in the U.S., Italy, or Hungary, whose wages low-skill migrants might suppress. (Or whose taxes will support these migrants on lavish benefits.) Not the women who will fall victim to Muslim rape gangs or MS-13. Not the citizens who’ll see their countries changing before their eyes. Changing into lands where female genital mutilation or cartel murders — once unheard of — become running sores affecting thousands. Where sharia law or Chavez-style socialism go from being obscure crank positions to planks in major party platforms.

Nope. Liberal Christians forbid you to think such impure thoughts.

Or really, any thoughts at all. Instead you should just emote. You will nod at the video footage that has been put together for you. Then you’ll cry at the carefully chosen photographs. You should let your sentiments of good-will, guilt, and (most of all) fear of “racist” opprobrium inundate your brain.

Liberal Christians forbid you to think such impure thoughts.

The goal of the “Seamless Garment” is to muddle together such absolute claims with much more complex questions. (Such as the right criteria for choosing immigrants.) Social justice Christians expect to you to pretend that every person in the Third World has the same right to come live on Swedish or Texan welfare and Medicaid as babies have to be born alive. Balderdash. Ten seconds of thinking refutes it.

That’s why they’re keen to prevent it. To forbid you to think about it. The religious left labels that a sin. They accuse you of being a Pharisee, a “doctor of the law,” for using the brain God gave you.

Philosophers have spotted this mode of argument as a fallacy. Economists have specified what kind. They call it “the Broken Window.” Catholic free-market thinker Frederic Bastiat was the first to explain it. I wrote about it back in 2011, showing how it moves “social justice” Christians to get both economics and abortion wrong.

Certain economists seem to think it’s a good idea to run around breaking windows in order to create jobs for glassmakers. Such thinkers fixate on what is seen — the newly employed glassmaker — and completely ignore what is not seen: the other, more prudent uses of the money that was wasted fixing the window. Once you have smashed the window, you can see with your own two eyes the friendly glassmaker who’s happy to earn some money fixing the thing; what you’ll never see is the person who might have been hired to plant the garden if the window hadn’t been broken, or the roses that never grew there….

Far too many Catholics, in reacting to political and economic issues, seem to make a virtue of fetishizing what is seen and ignoring what is not seen….

The case gets even more poignant when what is seen is a person who’s palpably poor, demonstrating outside the statehouse asking for benefits. It’s all too easy (and common nowadays) to airily dismiss the people who are not seen — the overtaxed working-class people who can’t afford parochial school, or SAT prep classes, or other worthy uses of their own money, for which they have worked….

[T]his habit [is] at the heart of the pro-choice mindset. Those who are addicted to choosing the seen over the unseen look at the issue of abortion with the same unthinking concreteness of the window-smashing economist. They hear the distress of women with unintended pregnancies. They see their distressed condition. They can picture themselves in their place and empathize with their suffering. What they don’t see, can’t hear, and will not imagine are the merely “abstract” rights of the unborn child who waits in the darkness. And so, in the name of compassion, they side with what they think are the best interests of the person whom they can see. They weave thereby a seamless garment of tyranny and injustice, all the while congratulating themselves. As Christ said of the Pharisees: They have their reward.

Predicting the Weather 100 Years from Now

This isn’t even how the religious Left operates on other issues. For instance, “climate change.” On that subject, the Left doesn’t want us to look at the concrete, suffering poor. For instance, the millions of people in developing countries who’d lose reliable access to electricity without fossil fuels. Or the people in hot climates who’d swelter without air conditioning — a “luxury” Pope Francis took time to denounce.

We don’t need computer models to see the effects on advanced societies of importing millions of poor people for whom no jobs exist. Whose cultures, politics, and deeply held beliefs are incompatible with the country that takes them. We can see it all across Europe, and in many American states.

Move along, move along, nothing to see here. We should instead look at what the magician is waving around in his hand: Computer models that try to predict the weather 100 years from now. Of course, the last models failed even to predict the temperature trends of the last 10 years, but never mind. Trust the experts. If need be, climate controllers will even pretend that God demands you accept the shaky scientific “consensus.” 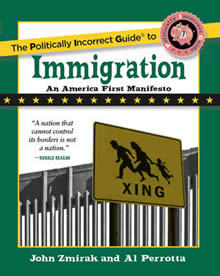 We don’t need computer models to see the effects on advanced societies of importing millions of poor people for whom no jobs exist. Whose cultures, politics, and deeply held beliefs are incompatible with the country that takes them. We can see it all across Europe, and in many American states. In the growing Islamist parties demanding sharia for Britain. For Germany. For Belgium. In the one-party failed states that massive Latino immigration is helping to create across the U.S. Or the fact that a pro-life candidate only won the popular vote for president ONCE since 1988. Politically, mass immigration today guarantees that abortion stays legal. If it had no other ill effects, that would be enough reason to oppose it, as abolitionists opposed admitting new slave states in 1850.

Our climate has already changed. Europeans are feeling the heat from orthodox Muslims. We see Venezuelan-style socialism, and demands for open borders, now fueling the Democratic party. The water’s bubbling over, and the frogs are starting to boil.