“We live in a time when the freedom of religion is under assault,” Vice President Mike Pence told the 2019 graduating class of Liberty University Saturday. “Yesterday, I was informed by the U.S. Commission on International Religious Freedom that today Christians suffer more persecution around the world than any other religion. In fact, the United Kingdom released a report just last week that said persecution of Christians worldwide is ‘near genocide levels.’”

Pence told the graduating Class of 2019 that they were well-prepared by the education they received from Liberty. Then he warned them of what was to come.

My message to all of you in the Class of 2019 is — derives of the moment that we’re living in today. You know, throughout most of American history, it’s been pretty easy to call yourself Christian. It didn’t even occur to people that you might be shunned or ridiculed for defending the teachings of the Bible.

He encouraged the group to have faith in themselves, their education and the principles and ideals they learned at Liberty. Most of all, have faith in God. “Have faith that He Who brought you this far will never leave you, nor forsake you, because He never will. 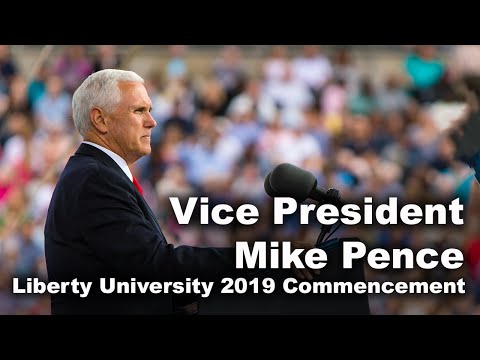