Cardinal Robert Sarah: On the Credibility of the Catholic Church

No Religious Exemption, by Aidan O’Connor Cardinal Robert Sarah celebrated Mass in St. Peter's Basilica on the occasion of the 50th anniversary of his ordination to the priesthood, Sept. 28, 2019. (photo: Evandro Inetti/CNA / EWTN)

COMMENTARY: Throughout two millennia, the Church has already played this role of guardian and ferryman of civilization. But does it still have the means, and the will, today?

Cardinal Robert Sarah is prefect emeritus of the Congregation for Divine Worship and the Discipline of the Sacraments.

Editor’s note: The essay first appeared Aug. 13 in the French-language newspaper Le Figaro. The English translation is reprinted here with the permission of Cardinal Robert Sarah. It has been edited for style. 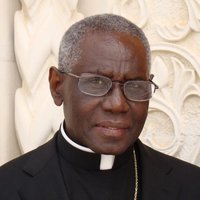 Doubt has taken hold of Western thought. Intellectuals and politicians alike describe the same impression of collapse. Faced with the breakdown of solidarity and the disintegration of identities, some turn to the Catholic Church. They ask her to give a reason to live together to individuals who have forgotten what unites them as one people. They beg her to provide a little more soul to make the cold harshness of consumer society bearable. When a priest is murdered, everyone is touched and many feel stricken to the core.

But is the Church capable of responding to these calls? Certainly, she has already played this role of guardian and transmitter of civilization. At the twilight of the Roman Empire, she knew how to pass on the flame that the barbarians were threatening to extinguish. But does she still have the means and the will to do so today? ….