Waiting for the McCarrick Report, by Stephen P. White

Fr. Nnamdi Moneme: The Eucharist: God’s Response to Our Helplessness EWTN News Nightly said it has also reached out for an interview to Vice President Joe Biden, the presumptive Democratic nominee for president.

Catholic News Agency is a service of EWTN News. 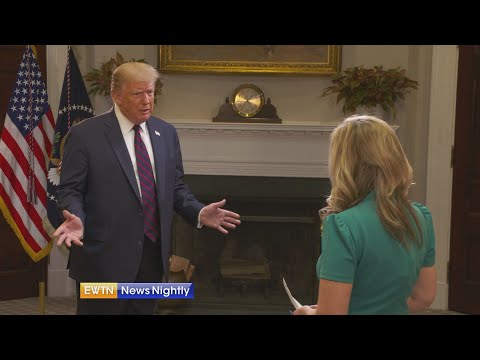 Tracy Sabol: Thank you so much, Mr. President, for speaking with us today. We appreciate it.

Tracy Sabol: We have a lot to get to. But I first want to talk about the economy. Where we are right now, of course, we’re starting with another round of stimulus. Can you talk about that and what’s needed for Republicans and Democrats to meet in the middle?

President Trump: So we had the greatest economy in the history of the world, not only in our country, in every country. We were beating China, beating everybody. They were having the worst economy they’ve had in over 67 years. So we were doing with the tariffs and all the things that I was doing. And then we had to close it up. It came from China. They should have stopped it. They could have stopped it, but they didn’t. They stopped it from going into their country, but they didn’t stop it from here, Europe, or the rest of the world. And we had to close it up and we did that. And now we’re coming back and we’re doing stimulus. We’ve already done it, as you know, very successfully. And we’ll probably have something worked out. We’ll see what happens. The problem with the Democrats, as you know, they want bailout money for their states and cities that have done so poorly under Democrat leadership. And I’m not happy with that. It’s not appropriate. This is having to do with the corona, I call it the “China-virus.” And so I think we’re doing very well. We had the best job numbers we’ve ever had, percentage-wise. You take a look at what happened, [indiscernible] close to seven million jobs over the last two months. New numbers are going to be coming out very soon. We’re back. We’re doing very well. I think next year is going to be one of the best years we’ve ever had. And it looks very, very strong.  ….