The editor-in-chief of the Catholic Herald announced last week that he is parting ways with the weekly paper because he and “the new owners” “do not agree on the future direction of the company.”

Damian Thompson made the announcement on Twitter following his recent hard-hitting appearance on EWTN’s “The World Over” in which he made a number of highly critical remarks about the the Vatican’s Amazon Synod working document (which he called “garbage”), the cowardly Catholic bishops of the United Kingdom and the United States, and the scandal-plagued pope who refuses to answer any questions about any the clerical abuse scandals currently rocking the Vatican.

Damian Thompson – ✔@holysmoke – The new owners of the @CatholicHerald and I do not agree on the future direction of the company (for my stance, see @RaymondArroyo’s show last week). Therefore I’m moving to the @spectator where I will be free to tell you what I really think 🙂 – ….

In a subsequent tweet, Thompson announced that he will be doing weekly podcasts for The Spectator, where he is an assistant editor. “This will be a truly dynamic religion podcast – I’m very excited about it,” he wrote.

In May of this year, former media mogul Conrad Black offloaded his 47.5 percent holding of the Catholic Herald in equal shares to ex-Tory MP Brooks Newmark and publisher William Cash, according to the Daily Mail.

In his “first tweet as a free man,” Thompson declared that the “corrupt pope” is “deeply implicated in terrible scandals.”

Damian Thompson – ✔@holysmoke – My first tweet as a free man. It’s now obvious that Pope Francis is deeply implicated in terrible scandals. My concern isn’t theological: it’s the spectacle of a corrupt pope, something I never expected to see in my lifetime

The next day, he added that the pope should be investigated.

Damian Thompson – ✔@holysmoke – We’re now reaching the point where Pope Francis should face investigation. There are several troubling mysteries surrounding him. Some of them relate to his behaviour as pope, some to his previous life in Argentina.

During his freewheeling interview with EWTN’s Raymond Arroyo on June 27,  Thompson didn’t hold back in criticizing the bishops of England and Wales after their deafening silence during a recent abortion controversy in Great Britain. A British court last month ruled that a mentally challenged woman must be forced to have an abortion against her will and the religious beliefs of her family. While the controversy was raging, the Catholic Herald implored the bishops to speak out.

On June 24, an appeals court in London overruled the lower court’s shocking decision to force the woman to have an abortion — but no thanks to the Catholic bishops who stayed mute throughout the ordeal.

The British journalist explained how the Catholic Herald had encouraged the bishops to speak up, “emphasizing how horrified Catholics were throughout the world.”

He said they finally got a feeble and unmemorable statement from auxiliary Bishop John Sherrington of the Diocese of Westminster condemning the “sad and distressing situation.”

To emphasize the impression the Bishop’s weak statement made on the faithful, Thompson cited a colleague mocking the response on Twitter: 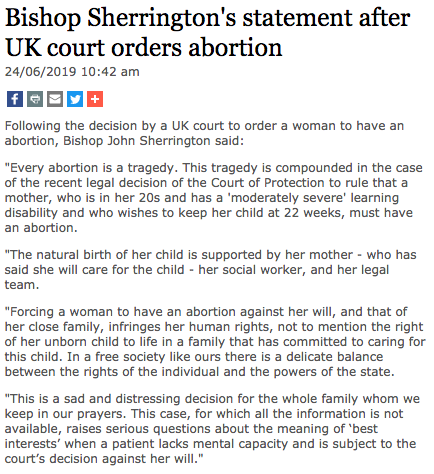 Tim Stanley – ✔@timothy_stanley – We note with regret that Jesus Christ has been nailed to a cross. Our thoughts and prayers are with his family at this time……

Thompson pointed out that the tepid statement lacked “the righteous anger” one would expect in the face of such an outrageous injustice, noting that a non-Catholic neighbor had actually wept when she’d heard that a judge had sentenced an unborn baby to death.

“If non-Catholics who aren’t completely pro-life were that horrified, where was the horror from the English bishops?” Thompson asked plaintively. “And actually, where were the celebrations when this murder — this execution — was overruled by the Court of Appeals?” he added.

Thompson complained that the bishops once again missed an opportunity to “rock the boat,” and move the nation’s needle to a more pro-life position.

Arroyo then asked the journalist for his opinion on Cardinal Walter Brandmüller’s assessment of the controversial “working document” for the upcoming Amazon Synod, which is being held in Rome this October.

In a scathing statement, the German cardinal wrote that the Synod must be rejected, calling it “heretical” and “in parts apostasy.” The Vatican working document raises the possibility of ordaining married men in an effort to provide greater access to the sacraments in the remote areas of the Amazon.

Thompson called Brandmüller’s statement “incredibly powerful and well written,” adding that he particularly appreciated Brandmüller’s impression that the document seemed to view the forests of the Amazon region “as a special source of divine revelation.”

He then ridiculed the document, calling it “garbage” that reads like “a sort of PC Disney production like Avatar written by an octogenarian European socialist — ‘Tell us, oh wise ones, what the spirits of the forests are telling us!'”

Stuff Ive Ate@StuffIveAte – From @RemnantNews :@HolySmoke formerly of The @CatholicHerald#AmazonSynod – “Tell us, oh wise ones, what the spirits of the forest are telling us” @TaylorRMarshall – ……

Thompson went on to condemn what he called the Vatican’s “patronizing liberal sanctification of indigenous religion,” singling out the document’s main author Bishop Erwin Kräutler.

Citing LifeSite News’ Maike Hickson, Thompson noted incredulously that Kräutler has actually come out against criminalizing infanticide in indigenous cultures because “here, in the name of human rights and under the pretext of suppressing infanticide, a broad ethnocide, a cultural murder, is being installed.”

“If that means anything, it means something very sinister,” Thompson said. “To be using this bit of the world as a laboratory for religious experimentation beggars belief,” he added later. “My personal message about the Amazon Synod is ‘CANCEL IT NOW.'”

Arroyo then moved on to a clerical abuse scandal that has roiled the Vatican all year involving Gustavo Zanchetta, the former bishop of Orán, Argentina. According to reports, Pope Francis helped Zanchetta find a top administrative job at the Holy See amid credible allegations of sexual misconduct against him.

The Vatican has insisted that it never received any accusation of sexual abuse against Bishop Zanchetta until well after the pope created a job for him inside the dicastery of the Roman Curia.

But former vicar general of Orán, Father Juan José Manzano, told the Associated Press in January that the Vatican had evidence of Zanchetta’s moral turpitude in 2015 — way before he resigned as bishop of Orán.

Now, an Argentine judge has granted the accused sexual predator permission to leave the country and find refuge in Rome.

“Why would the Vatican permit him to come into their midst?” Arroyo asked Thompson.

“There are so many questions one could ask about a range of unsavory characters who seem to find sanctuary in the Vatican,” the journalist lamented. “The case of Bishop Zanchetta, of course, is the most notorious of all of them.”

While he was the archbishop and cardinal of Buenos Aires, Argentina, Pope Francis faced numerous serious accusations of covering up priestly abuse, although he has insisted that sexual abuse never happened in his diocese.

In one case, Francis (then-Cardinal Jorge Mario Bergoglio) reportedly attempted to at first cover-up and then minimize a scandal involving a bishop who was caught en flagrante with a 23-year-old male chauffeur.

Thompson described a conversation he’d recently had with an unnamed cardinal about the pope’s involvement in a mounting number of cover-ups.

“I said, ‘these are cases in which really serious questions about decisions made by the Holy Father need to be answered and he’s refusing to answer them,'” he told Arroyo, adding that it was the cardinal’s responsibility to ask those questions.

Thompson said that although the cardinal has not asked the questions and likely won’t, “I did notice that he didn’t put up a single word of defense of current advisers to the Holy Father, to put it diplomatically.”

The writer later suggested on Twitter that the cardinal in question was Cardinal Vincent Nichols, archbishop of Westminster and president of the Catholic Bishops’ Conference of England and Wales.

Damian Thompson – ✔@holysmoke –  · Jul 5, 2019 – We’re now reaching the point where Pope Francis should face investigation. There are several troubling mysteries surrounding him. Some of them relate to his behaviour as pope, some to his previous life in Argentina.

Damian Thompson – ✔@holysmoke – I’ve spoken face to face with Cardinal Nichols about the Francis-related scandals, explaining that the Pope’s integrity has been called into question. I said: “You are a cardinal. You should be asking questions.” I can’t repeat his reply, but I was impressed by his politeness…..

Thompson told Arroyo that the Zanchetta scandal is “deeply troubling” and that the message to the faithful seems to be “this is none of your business.”

“It’s the same message that was sent when the horrible — now dead — Cardinal Danneels tried to cover up incestuous child abuse and then was invited to a Synod on the family,” Thompson added incredulously.

After the infamous Cardinal Danneels died last March, Pope Francis hailed him as a “dedicated Catholic pastor” — quite a stretch of the imagination considering his pastoral history.

In 2015, Danneels, the archbishop emeritus of Brussels, confessed to being part of the radical “St. Gallen Mafia,” which opposed Benedict XVI. According to the National Catholic Register, he also once wrote a letter to the Belgium government expressing his support for same-sex marriage legislation.

The cardinal is already known for having once  advised the king of Belgium to sign an abortion law in 1990, for telling a victim of clerical sex abuse to  keep quiet, and for  refusing to forbid pornographic, “educational” materials being used in Belgian Catholic schools.

In 2010, Danneels advised the nephew of his good friend Bishop Roger Vangheluwe not to go public with an accusation of sexual abuse against his uncle. After the nephew told Danneels that his friend had molested him for thirteen years, the cardinal advised the young man “not to make a lot of noise” about the abuse he endured because Vangheluwe was scheduled to retire in a year anyway. “It would be better that you wait,”  Danneels reportedly advised the nephew, while also urging him to forgive his uncle.

The nephew reportedly recorded the conversation and subsequently released a videotape to the press.

Thompson found it difficult to express his disgust with the Vatican’s behavior in the face of so many scandals “close to the Holy Father.”

“It’s hard to sum up the message in polite words so I won’t try,” he said sadly.

Watch: Our editor-in-chief ⁦@holysmoke⁩ sets out our pro-life mission and calls for cancellation of Amazon Synod on ⁦@RaymondArroyo⁩’s The World Over https://youtu.be/1TcVa4OST6A?list=PL0B89A05F9F6D3E47 …

Vatican Whistleblower Claims Rector of Washington, D.C. Basilica Is a Member of the ‘Gay Mafia’