Rep. Brian Sims making an obscene gesture in this "welcome" to Vice President Mike Pence, with this caption: "OFFICIAL WELCOME: @MikePenceVP let me be the first to officially welcome you to the City of Brotherly Love and to my District! We’re a City of soaring diversity. We believe in the power of all people: Black, Brown, Queer, Trans, Atheist, & Immigrant. So...get bent, then get out!" Bleeping courtesy of The Stream. 22930

The other day some guy on social media called me “A Southern White Boy.” I’m guessing that in his mind a “Southern White Boy” must be a toothless, banjo playing rapist. So I must be ready to kiss my sister/wife good bye, grab my white hood, jump in my pick up and head for the next lynching.

I live in South Carolina. We have one of the largest populations of African Americans of any state. Believe it or not, we’re aware of our history. We acknowledge the legacy of slavery and segregation and we’re ashamed of it, but we’re also proud of our progress. We elected Nikki Haley, a woman of color, and the daughter of immigrants, as our governor. Sure, there are still some folks who are racist, and no doubt there are some deeply engrained racist attitudes that are hard to shift. But at least most folks aren’t going around consciously using racist epithets, baiting people and harassing old folks of color.

Unfortunately the same can’t be said of everybody North of the border. This week Pennsylvania state representative Brian Sims actually filmed himself publicly harassing a woman for the color of her skin, her religion and her age. That he did so publicly, filmed it and posted it on the internet shows that he is as proud of his racism, ageism and religious bigotry as any old fashioned Ku Klux Klan member who hates blacks, Jews and Catholics.

The old woman’s skin color in this instance happened to be white and she was praying outside a Planned Parenthood clinic. Check out the appalling video:

For almost nine minutes Sims paced back and forth harassing the old white woman. She wasn’t being ugly or violent. She wasn’t yelling or screaming at anybody. She was exercising her constitutional rights to public protest. She was doing so not with a noisy and obnoxious campaign. She was praying. Quietly.

But this thuggish young man followed her. He intimidated her with his yelling. He repeated his charge that she was “an old white woman”. He attacked her Christian faith.

Faced with the outrage of Sims’ attack, one scarcely knows where to start. Firstly, did no one teach young Brian Sims anything about respect for his elders? Boy Scouts used to help old ladies across the street. In the video Brian Sims is simmering with so much hate that it feels like he’s about to push the old dear into the passing traffic.

Secondly, one assumes that if Brian Sims is pro-choice he believes he is advocating for women. So this is how you treat a woman? You chase her down in public? You yell at her, try to corner her and physically intimidate her? You threaten to show up at her house to bully her further? That’s how you stick up for women? It looked and sounded pretty misogynistic to me.

Third, while attacking her for being white, Sims accuses her of being racist. But attacking a person for the color of their skin is the most fundamental form of racism isn’t it?

Being Anti-Racist by Killing Black Babies

Sims takes for granted what we all know already, that abortion is the largest killer of black children in America. Planned Parenthood proudly carries out the plan of their eugenicist founder Margaret Sanger, and Sims is keen to accompany those unborn African American kids to their death.

The woman protesting abortion is racist? But what could be more racist than the plan to weed out the blacks before they are born? As pastor Clenard Childress, Jr., has said, “The most dangerous place for an African American child is in the womb.”

Trying to Expose Teenagers to Violence

In another video posted later in the day, Sims attacked three teenage girls who were protesting, once again smearing their race and religion. Sims’ intemperate tirades reveal the irrational rage simmering beneath the surface of the pro-abortion movement. Beneath the self righteous advocacy and Victimism, the agents of death in our culture thrive on rage against Christians, conservatives and all those who would oppose their Culture of Death. 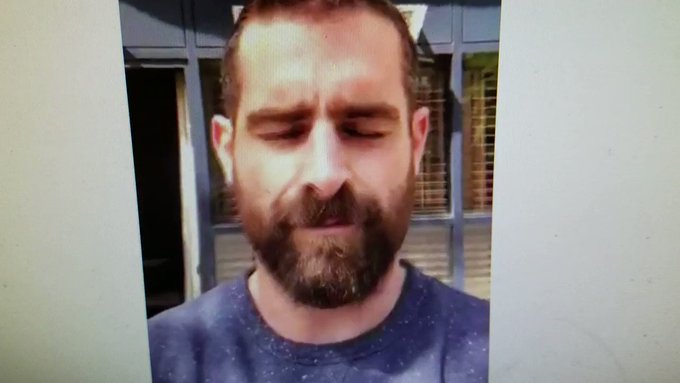 This is not the first time @briansimspa has harassed pro-life women.

“I’ve got $100 to anybody who will identify these three, and I
will donate to Planned Parenthood”https://www.lifenews.com/2019/05/06/democrat-legislator-brian-sims-previously-tried-to-doxx-pro-life-women-offered-100-to-identify-them/ …

But If You Wear a MAGA Hat…

Transpose Sims’ outrageous behavior for a moment to Washington, D.C., last January. A young high school student made the national news because he stood smiling in the face of an pushy Native American campaigner. Before that he and his friends stood by as they were attacked by a group of large, loud and aggressive African Americans.

What if Nick Sandmann had actually behaved like Brian Sims? What if the Covington boys went on an ageist, sexist, racist rampage like Sims and harassed the Native American elder? Imagine that Sandmann had mocked the elder’s faith, chased him around, got in his face, threatened to find his home and harass him further.

But the liberal press pilloried Nick Sandmann as a racist “Southern White Boy.” What if Nick Sandmann had actually behaved like Brian Sims? What if the Covington boys went on an ageist, sexist, racist rampage like Sims and harassed the Native American elder? Imagine that Sandmann had mocked the elder’s faith, chased him around, got in his face, threatened to find his home and harass him further.

Sims accused the old white woman of not doing enough to help poor children who are already born. Pro-life warriors should remember that we are not only opposed to abortion. We’re also working hard to help women in crisis pregnancies. We’re there to serve the needy and work with them not only to choose life, but to have opportunities to choose an abundant and full life.

It’s racist to call somebody a “Southern White Boy” and it’s racist to attack an old woman for being white. We’re better than that. It’s time for all of us to not only put racism, ageism and religious prejudice to rest, but also to stop using such ignorant and hateful bigotry as a way to attack anyone with whom we disagree.

Read Dwight Longenecker’s blog, listen to his podcasts, browse his books and be in touch at dwightlongenecker.com