Good Friday & the Hidden Meanings of “Golgotha”: Whose Skull Was It? There is a lot going on during Christ’s Crucifixion just beneath the surface. You know that Christ is crucified on Golgotha, the Place of the Skull. But who’s skull is it? Also, why was Christ crucified at this particular spot? 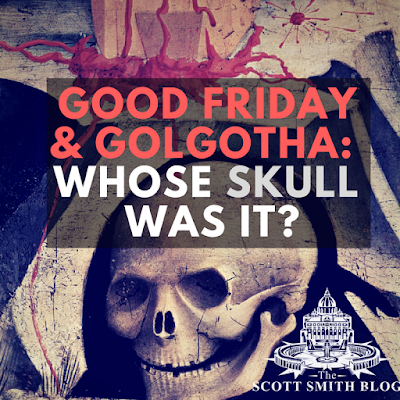 St. Paul gives us a hint in Romans 5:12-14:
Therefore as sin came into the world through one man and death through sin, and so death spread to all men because all men sinned … death reigned from Adam to Moses, even over those whose sins were not like the transgression of Adam, who was a type of the one who was to come.

All sin came into the world through one man, Adam. Wouldn’t it be perfect if all sin was conquered by one man? It was.

Wouldn’t it be even more perfect if …

What if I told you Adam was there?

THE JEWS & THE RELICS [BONES] OF THE PATRIARCHS

The Jews – this is actually an inaccurate term historically. When we talk about the Jews before the Roman period, it is more accurate to call them the Hebrews, the Semitic people, or the Israelites, depending on the period. 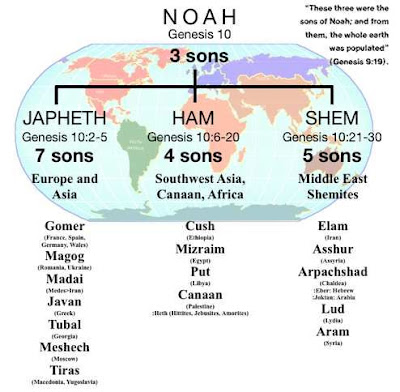 The Hebrews, the Semitic people, the Israelites – all of them – were very careful with the bones of their forebears, the Patriarchs.

Thank God for small favors, right? But this was not a small thing, as we will see.

And Moses took the bones of Joseph with him; for Joseph had solemnly sworn the people of Israel, saying, “God will visit you; then you must carry my bones with you from here.”

So the Israelites took special care for the bones of the Patriarch Joseph, but what about the Father of Fathers, the Patriarch of Patriarchs, Adam, himself?

Incidentally, if you’re wondering about what happened to the bones of Moses, whether there is a tomb of Moses, check out this article, the Assumption of Moses.

WHAT ABOUT THE BONES OF ADAM?

There is an amazing tradition among the Jews at the time of Jesus. Noah confided the skull of Adam to his son, Shem – remember Shem? I told you we would circle back to Shem.

Shem, then, passed on the skull of Adam to Melchizedek, the priest of Salem.

SIDENOTE: THE NEW ARK OF NOAH

MELCHIZEDEK & THE BONES OF ADAM

Where, then, did Melchizedek eventually place the Bones of Adam? I think you can already guess at this, but hold on …

Melchizedek, therefore, was a priest, according to the line of Adam. Christ restores this.

Melchizedek was the Priest and King of Salem, the King of Peace. Hebrews 7:1-3 tell us the following:

For this Melchiz′edek, king of Salem, priest of the Most High God, met Abraham returning from the slaughter of the kings and blessed him; and to him Abraham apportioned a tenth part of everything. He is first, by translation of his name, king of righteousness, and then he is also king of Salem, that is, king of peace. He is without father or mother or genealogy, and has neither beginning of days nor end of life, but resembling the Son of God he continues a priest for ever.

Salem, like Shalom, means “peace.” This is why Melchizedek is called “King of Peace.” Does this sound reminiscent of Jesus’ title, “Prince of Peace”? See, for example, Isaiah 9:6.

Later, the Hebrews would build a city at Salem. Guess what the Hebrew word for “City of Peace” is? [source]

So Where Did Melchizedek Place the Bones of Adam?

The Talmudists and the Church Fathers were well aware of this tradition. The Evangelists, too, Matthew, Mark, Luke, and John, also lend credence to the tradition, as they speak of one and not of many skulls. Golgotha is the place of the skull, i.e. one famous skull, not a general place of execution strewn with skulls. [source]

WHERE DOES THE WORD “CALVARY” COME FROM?

The word “Calvary” (Latin Calvaria) means “a skull”. Calvaria and the Greek form Kranion, like “cranium,” are equivalents for the original Hebrew word Golgotha. [source]

THE CHURCH OF THE HOLY SEPULCHRE: WHAT LIES BENEATH THE MOUNT OF CALVARY?

There is a very special chapel beneath Calvary in the Church of the Holy Sepulchre. Can you guess what it’s called?

THE CHAPEL OF ADAM.

This next part will blow your “Calvaria” …

According to legend, at the Crucifixion, Jesus’ blood ran down the Cross and through the rocks of Golgotha to fill the skull of Adam.

This is depicted in the artwork hanging in the Chapel of Adam: 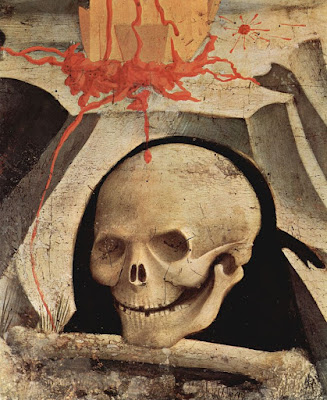 In the Chapel of Adam, the Rock of Calvary appears cracked through a window on the altar wall. The crack is traditionally claimed to be caused by the earthquake that occurred when Jesus died on the cross.

Here’s an image of the cracked Rock of Calvary: 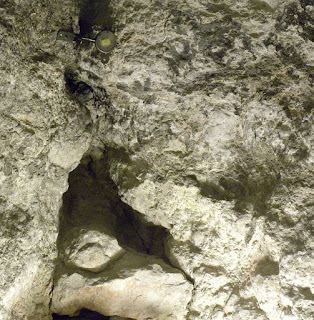 Is that not *literally* mind-blowing? But wait … there’s more!

NOT ONLY THAT … THERE’S MORE IN GENESIS

Genesis 3:15, the Proto-evangelium (read more here) or “First Gospel,” states that the Messiah will crush the skull of the serpent.

The Cross of Christ (Hb. Messiah) is literally stabbed into a skull-shaped or skull-associated rock.

NOT ONLY THAT … THERE’S A CONNECTION TO ABRAHAM & ISAAC

Adam’s Burial is not the only historical event to occur at Calvary. According to Medieval tradition, Adam’s burial and Abraham’s sacrifice of Isaac are both located at Calvary. [source]

Read more about this in an upcoming post describing the connections between Abraham’s sacrifice of Isaac, his one and only beloved son, and the God’s sacrifice of His Son.

PLEASE BRING THIS TO YOUR EXPERIENCE OF GOOD FRIDAY (AND EASTER)

Hopefully, this will change the way you see the Cross on Good Friday. The Cross isn’t just for one moment in time. The Cross connects Adam to Jesus to you and me. The Cross is for all time!