I owe Kim Kardashian West an apology. I’ve never watched Keeping Up With the Kardashians or tried to learn much about her. But I’ve dealt out my share of judgment whenever she appeared in my social media feeds.

Now I have to eat crow. Because she showed up a bunch of virtue-signaling celebrities, and she’s earned my respect for it.

The Kardashian queen made headlines last week when she met with President Donald Trump to discuss the life sentence of Alice Johnson. The now 63-year-old grandmother was in federal prison for 21 years for nonviolent drug charges. Kardashian West lobbied Trump for Johnson’s clemency, and spoke to him about prison reform.

“Ms. Johnson has accepted responsibility for her past behavior and has been a model prisoner over the past two decades,” a White House statement said. “While this administration will always be very tough on crime, it believes that those who have paid their debt to society and worked hard to better themselves while in prison deserve a second chance.”

Watch Johnson’s reunion with her family: 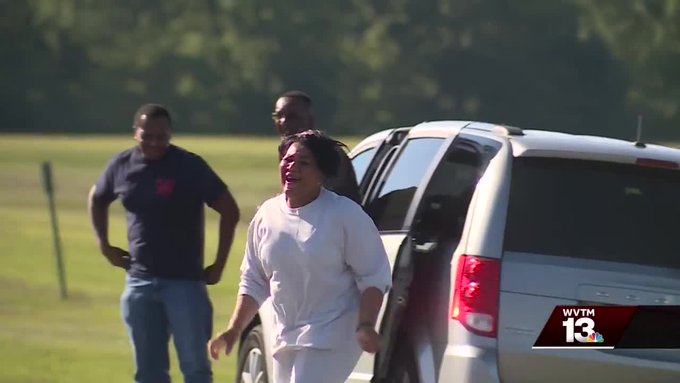 #WVTM13   ✔@WVTM13  Alice Johnson, the moment she was released from prison and reunited with her family

The fact is that Kardashian West did more with one visit to the Oval Office than much of liberal Hollywood has done since Trump’s election. Yes, they’ve racked up plenty of Resistance points by delivering stirring speeches at multi-million dollar events while wearing diamond-studded gowns and holding over-sized trophies. They’ve earned congratulatory back-pats by mocking Trump administration officials on late night shows. They’ve worn their heart on their sleeve with carefully scripted, tearfully delivered monologues and vulgarities that “speak truth to power.” But what have they done? How many lives have they actually changed?

Kardashian West knew her meeting with Trump and members of his administration would be controversial. Especially since plenty of high-profile athletes have refused to do the same, and received their due Resistance points. But she went anyway. She wielded her influence to do more than rack up likes on social media. She lobbied, in person, for a cause that mattered to her, and she came out a winner.

Maybe if more people, including highly influential celebrities, worked quietly to achieve small, concrete changes, our country would be a better place.

Some may argue the victory Kardashian West won was small. “Couldn’t you have used your access to try to get the President to do something about a larger issue?” one critic tweeted. Let them criticize. Because for Alice Johnson and her family, what Kardashian West did is everything. Maybe if more people, including highly influential celebrities, worked quietly to achieve small, concrete changes, our country would be a better place.

(To be fair, I’m not up on behind-the-scenes charity work that many celebrities may do. But in general, Hollywood makes far more headlines for criticizing Trump on TV than going to the White House to meet with him.)

I’m under no delusions that Kardashian West is now some kind of conservative or Trump supporter. (She supported Hillary Clinton in the 2016 election, and has spoken out for unfortunate left-wing causes like gun control and abortion.) And to be clear, this isn’t just me being a Kardashian fangirl. I’m still not.

But I apologize for dismissing her as an airhead celebrity with little to offer. And I respect her for being willing to meet with a leader she doesn’t always agree with to get something done, despite likely criticism from many of her fans and fellow in-crowd members. After all, it’s easy to complain to your base about something you don’t like. It’s hard to reach across the aisle and work with people different than you, and get real results. Unlike many in Hollywood, that’s what she did.

Actions speak louder than words. And this week, America heard Kim Kardashian West. If other celebrities want to be heard rather than tuned out, they should take a cue from Kim, stop pontificating and get to work. Even if that means braving enemy territory and meeting with Donald Trump himself. They might just help someone.