WASHINGTON DC, June 4, 2018 (LifeSiteNews) – Unlike President Obama who famously lit up the White House with the colors of rainbow flag, for the second year in a row President Donald J. Trump has chosen to let gay ‘Pride Month’ slide by with no official recognition.

The LGBT world has expressed displeasure with the President’s silence on the issue.  The Human Rights Campaign (HRC)––the behemoth Washington, DC LGBT lobbying firm––sent out a tweet claiming that the silence is an indication the current administration wants to “erase” the presence of gays:

In May, Trump and Pence recognized National Physical Fitness and Sports Month.

And yet, they still refuse to recognize #Pride month for #LGBTQ Americans. Why are Trump and Pence so insistent on erasing us?

In contrast with former President Obama––who evolved from believing that marriage is solely between a man and a woman toward full embracing same-sex “marriage”––President Trump seems to have quietly evolved in the opposite direction.

While on the campaign trail, candidate Trump presented a friendly attitude toward the LGBT ‘community,’ saying he would do everything he could “to protect our LGBTQ citizens from the violence and oppression of the hateful, foreign ideology, believe me.”

After 500 days in office, his words and intent have become clearer.  President Trump fights for the rights that all human beings share in common, while declining to promote the agenda items of LGBT activists and their progressive allies.

Through their criticism of the White House’s inattention to their preferred agenda, LGBT activists appear incapable of drawing a distinction between the robust protection of human rights and disagreement on policy issues geared toward a small cohort of citizens.  They seem to mistakenly perceive all their policy pursuits as human rights issues, and so they interpret rejection of their agenda as anti-gay and discriminatory.

During the first year of his Administration, President Trump overturned an Obama-era order that required businesses doing contract work for the government to prove they were complying with federal rules regarding hiring, firing, and promotions of LGBT employees.

The Trump administration has sought to overturn a policy change by the Obama administration that allowed transgender individuals to serve openly in the military.

More recently, the Trump Administration’s Education Department told a news agency that it will no longer investigate or take action on complaints filed by transgender students who say they are being discriminated against by being told to use bathrooms corresponding to their biological gender.

Perhaps most tellingly, the Administration has also raised the ire of LGBT activists by its consistent nomination and placement of federal court judges they deem hostile to their agenda.

Not surprisingly, the many government agencies headquartered in Washington, DC and which are populated by lifelong bureaucrats, will go forth with the recognition of LGBT ‘Pride’ in June.  What differs from the days of the Obama administration is that the Cabinet Secretaries who lead those agencies will not be joining in the LGBT-celebrating festivities.

With Pride month approaching, many U.S. agencies in the second year of the Trump administration are continuing plans to hold celebrations for their LGBT workers, although Cabinet leaders will be absent and some annual events are in question.

The absence of Cabinet leaders at these events stands in contrast to the Obama years when they were featured speakers at the celebrations, wished LGBT federal workers a happy Pride and reflected on the significance of the annual event.

In contrast with other cabinet-level agencies, Secretary of State Mike Pompeo who has been roundly criticised for his ‘anti-gay’ views, issued a statement recognizing June as LGBTI Pride Month. 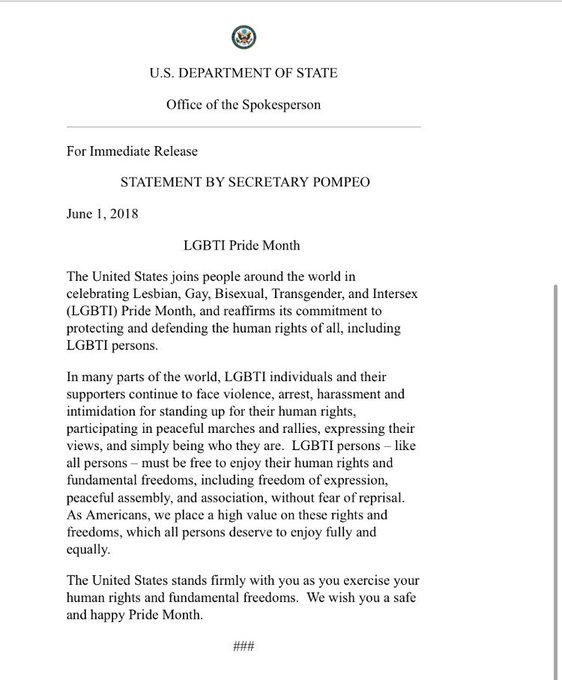 The United States joins people around the world in celebrating Lesbian, Gay, Bisexual, Transgender, and Intersex (LGBTI) Pride Month, and reaffirms its commitment to protecting and defending the human rights of all, including LGBTI persons.

In many parts of the world, LGBTI individuals and their supporters continue to face violence, arrest, harassment and intimidation for standing up for their human rights, participating in peaceful marches and rallies, expressing their views, and simply being who they are. LGBTI persons – like all persons – must be free to enjoy their human rights and fundamental freedoms, including freedom of expression, peaceful assembly, and association, without fear of reprisal. As Americans, we place a high value on these rights and freedoms, which all persons deserve to enjoy fully and equally.

The United States stands firmly with you as you exercise your human rights and fundamental freedoms. We wish you a safe and happy Pride Month.

While the statement does use the term “celebrate,” it ignores the advancement of the gay agenda as it speaks solely of the protection of “human rights and fundamental freedoms.”