An image of Christ crowned king from the event’s flyer

DETROIT (ChurchMilitant.com) – Catholics in Ireland are hoping countrymen will turn out in force to do spiritual battle for their nation through praying the Rosary. Following Poland and Italy’s lead, the “Rosary on the Coast for Life and Faith” will take place all over Ireland on November 26 — the Feast of Christ the King.

In an email on Thursday, the Rosary on the Coast for Life and Faith Committee lauded Poland’s “Rosary to the Borders” on October 7, as well as the October 13 “Rosary on the Border” in Italy.

“Why the Feast of Christ the King?” the organizers’ email asked. “Ireland was the first country in the world to be consecrated to Christ the King. … Acknowledging Christ as King has great relevance for the spiritual life of Ireland and also for its social, cultural and political life. When we honor Christ as King, we are immediately brought to His Queen, Mary and her Immaculate Heart.”

“It is Ireland’s turn,” organizers said. “Our island is in the midst of a catastrophic loss of Catholic faith especially among the young. Ireland, both North and South, is facing an immediate threat to the protection of the unborn.”

The Republic of Ireland and U.K. member-state Northern Ireland have some of the strongest pro-life laws in the world. But politicians from Britain and around the globe are tempting the Irish to embrace unfettered abortion. For instance, owing to a series of U.K. political maneuvers this summer, women from Northern Ireland can get abortions free of charge at abortuaries in England, Wales or Scotland.

Ireland, both North and South, is facing an immediate threat to the protection of the unborn.

Organizers say their goal is to surround Ireland with a human Rosary. They want to have participants in at least 53 locations throughout Ireland, signifying the 53 “Hail Mary”s of a typical five-decade Rosary. The current draft of a flyer states, “Ideally we will have a minimum of 53 locations for the [53] Hail Marys in a Rosary.”

Church Militant emailed a member of the Rosary on the Coast for Life and Faith Committee, asking her about the planning efforts thus far. She replied, “We have the offer of help and support from several groups already. Ireland is a village and news travels fast.”

The committee member noted that they were working on “a major information sheet,” as well as a Facebook page.

The Emerald Isle, known historically for its rustic Catholic culture, has in recent years been swept away by the forces of secularism. The faithful Catholics that remain observe that nearly a century of sub-par catechesis left many Irish ignorant of the Faith and easily persuadable to leave the Faith.

In 2015, the Republic of Ireland legalized same-sex “marriage” by popular referendum. In the same year, it allowed gender-confused, “transgender” individuals to switch their official gender in government records.

The Rosary planner we communicated with noted the widespread lack of faith among Irish youth. She told us, “There has been a tourniquet on Ireland that has stopped the transmission of the Faith since the 1960s. I have lived here since 1970. I watched it happen. Teaching the Faith ended in the school (which the parents relied on).”

An education in Ireland today, she said, typically involves “fluffy primary school,” “indifferent or anti-[Catholic] secondary school” and “university, which has a mission to dismantle whatever is left of the Faith.”

A recent analysis of 2016 census data from the Republic of Ireland revealed that Catholicism is declining rapidly in the country. From 2011–2016, the number of young people with no religious affiliation grew by a whopping 74 percent. While some non-Catholic religions are growing slowly in Ireland, “no religion” is by far the land’s fastest-growing group.

It is Ireland’s turn. Our island is in the midst of a catastrophic loss of Catholic faith especially among the young. 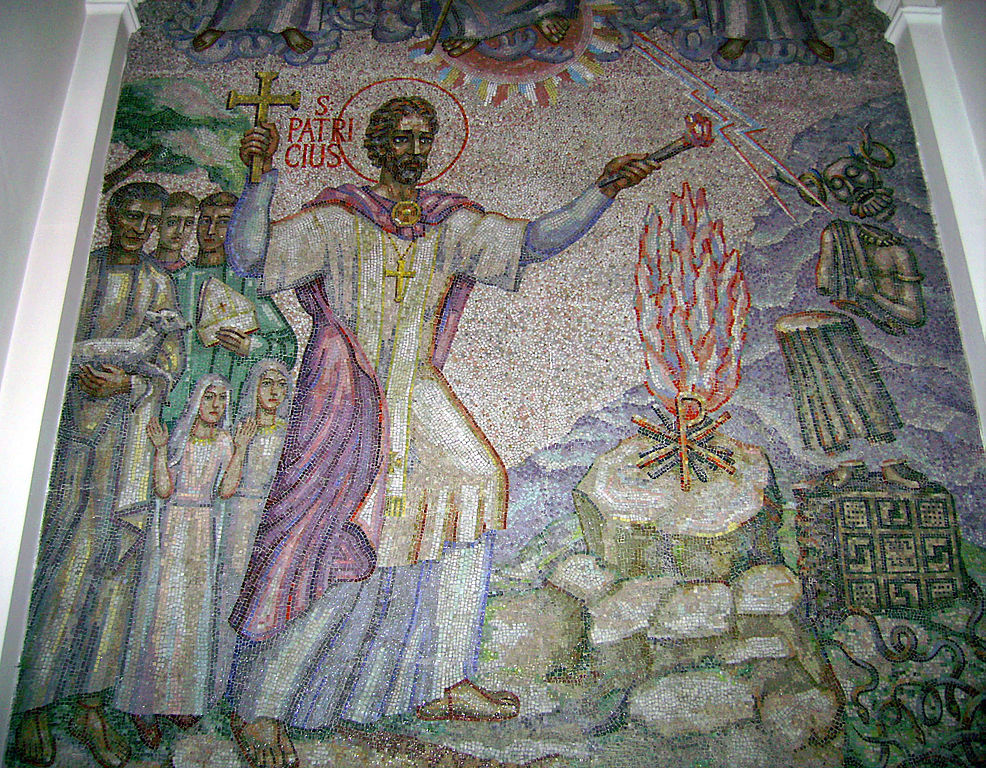 Mural of St. Patrick in Christ the King Cathedral, Mullingar

The Rosary rally’s leaders ask the priests and bishops of Ireland to lead the Rosary in the churches and cathedrals. They write to clergy, “We ask you to lead the Rosary, and at 3 p.m. to lead the Mercy Chaplet or other mercy prayer and the prayers of consecration to Christ the King and to the Immaculate Heart of Mary.”

Organizers also ask participants to plant a Miraculous Medal in the ground at the coastal spot where they pray. They consider it a way of asking Our Lady to protect the island through her powerful intercession.

There were originally two different groups, trying to organize a nationwide Rosary in Ireland. One was planned for November 26 and the other was planned for the Feast of the Immaculate Conception on December 8. When the two coalitions heard of each other, they got in touch and opted to merge into a single effort.

There has been a tourniquet on Ireland that has stopped the transmission of the Faith since the 1960s.

The collapse of Catholic identity in Ireland has been quickened by unfaithful priests and prelates.

Archbishop Diarmuid Martin of Dublin, for example, refuses to affirm Church teaching on marriage and sexuality. A recent document from the Dublin archdiocese, in anticipation of the 2018 World Meeting of Families, spoke positively of same-sex relationships and featured a photograph of two women in an embrace — with an LGBTQ rainbow hand-tattoo in the center of the image.

In 2011, Church Militant’s own Michael Voris was in Ireland and filmed several episodes of The Vortex there. In one episode, he asked young people “on the streets” about religion. His findings confirmed what the Rosary organizer told us. One young woman he spoke with declared, “We believe what we want to believe.”

Ireland is home to a few theologically dissenting organizations such as We Are Church Ireland (WACI) and Association of Catholic Priests (ACP). Unsurprisingly, WACI and ACP often work together to coordinate “gay pride” Masses in parishes throughout Ireland. The two groups support same-sex “marriage” and wish for female priests.

The Catholic Church in Ireland has fallen victim to the homosexual priest and priestly sex abuse crises. Heterodox church leaders in Ireland continue to downplay and deny the problems. A Dominican friar in Ireland, Fr. Tom Jordan, told The Irish Times on October 10 that “the failure of the church in recent times was due not so much to the abysmal behavior by some clergy in sexually abusing minors but that some clergy were bullies.”

The “bullies,” according to Fr. Jordan, are those who uphold Church teachings and punish theological dissidents. He complained to the reporter, “Consider the number of priests silenced or removed from office because of their expressed views and without being afforded an opportunity of defending themselves.”

This is at odds with a 2012 document from Vatican officials, which addressed the sex abuse crisis in Ireland and touched on the nation’s widespread theological dissent. It is impossible, the Vatican officials said, for theological errors to be a source of “authentic renewal” in the Church.

Ireland’s Rosary at the Coast for Life and Faith is set for 2:30 p.m on Sunday, November 26. Information can be found on the Facebook page.

David Nussman is an intern with the News Department.