Like the Wizard of Oz, the media are using all their special effects to shock us and awe us. To keep us from seeing the “man behind the curtain.” And too many conservatives and Christians are playing along. They’re letting the reign of terror get to them.

That’s the lesson of the face-off between pro-life kids in MAGA hats from a Kentucky Catholic school and a crazy quilt of American Indian protestors and Jew-bashing, gay-baiting “Black Hebrew Israelites.” What you saw of that event in the media? That was a carefully doctored propaganda montage. Happily, that narrative fell apart within less than 24 hours. Thank heavens for real, unedited footage taken by citizens with their phones.

What really outrages me isn’t CNN lying. I know that’s what the MSM does, so I avoid it. I only turn on my TV to watch “Impractical Jokers” and “The Carbonaro Effect.” They don’t pretend to be news shows.

Why Rush to Shoot Our Own Wounded?

But I was shocked by the desperate eagerness with which some prominent conservatives, and the pro-life kids’ own Catholic schools and bishops, denounced these teenagers based on biased media snippets.

Here’s how The New York Times (echoing other media, such as CNN) reported on this non-violent clash of opinions. It cited,

The episode was being investigated and the students could face punishment, up to and including expulsion, their school said in a statement on Saturday afternoon.

In video footage that was shared widely on social media, one boy, wearing the red hat that has become a signature of President Trump, stood directly in front of the elder, who stared impassively ahead while playing a ceremonial drum.

Without waiting for the raw video, or the students’ side of the story, the boys’ Catholic high school denounced them. The school spoke of possible expulsion. Their own church leaders, the bishops of their home state, joined in the witch hunt.

My first thought on seeing that was: “If only priestly sex abusers got such prompt condemnations. Instead of secret transfers to other parishes and hush money from the bishop. Catholic boys seem to be the last thing which the church establishment is interested in protecting.”

Don’t Join the School of Piranhas

Instead, we saw an instant feeding frenzy. One aimed at destroying young men’s lives, based only on … carefully edited footage from screamingly biased media. And our religious leaders, and even some typically canny political commentators, showed an unseemly eagerness to join in.

Prominent conservatives, including Rich Lowry of National Review, piled on in the rush to judgment. So did philosopher Robert George, and even cartoonist Scott Adams. Plus a dozen other people whose opinions I usually respect. Most of these folks have since corrected themselves, even apologized. And that’s to their credit. In fact, there’s a great sucking sound now on Twitter of embarrassed conservative commentators retracting their instant, ill-considered anathemas.

I’m pretty happy, by contrast, with my instinctive reaction. I stand by what I wrote:

John Zmirak@JZmirak – Just to be clear: Even if the #CovingtonCatholicHighSchool students HAD been chanting “Build the Wall” or mocking the ridiculous behavior of their political opponents, that was their RIGHT AS AMERICAN CITIZENS and as Catholics. Their race or their opponents’ means nothing.  1:26 PM – Jan 20, 2019  Twitter Ads info and privacy  See John Zmirak’s other Tweets

So What Did Happen?

Want to know what really happened? For that you’ll need to turn to the actual raw footage. 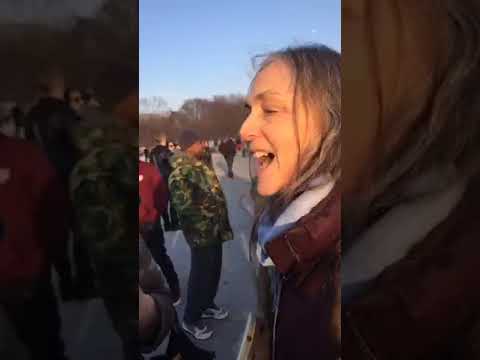 Fast-forward an hour or so to skip all the vicious hate speech of the Black Hebrew Israelites. At 1:12:23, the American Indians, led by tribal elder (and professional left-wing activist) Nathan Phillips, start to march from their allies, the black anti-Semites, over to the pro-life students. To invade their space. That’s a no-no in political confrontations, one which police usually try to stop to avoid any violence. But there wasn’t any violence. At all.

Then Phillips starts banging a drum in one student’s face. To his credit, the student neither backs down nor insults the man. He just keeps up a confident smile. I wouldn’t have had such self-restraint at age 17. Instead of having his life destroyed, this young man deserves an appointment to West Point if he wants it. And I hope one of his senators, either Rand Paul or Mitch McConnell, offers it to him.

If only priestly sex abusers got such prompt condemnations. Instead of secret transfers to other parishes and hush money from the bishop. Catholic boys seem to be the last thing which the church establishment is interested in protecting.

Mike Cernovich, in his analysis of the footage, noted something important. (Go to 7:33 in his video.) One of the Indians tells the white students, “You white people, this is not your land. Go back to Europe!”

Some Hate Speech Is More Equal Than Others

Now, did you read that in The Washington Post? Imagine that a white student had told Hispanic immigrants, “You brown people, this is not your land. Go back to Mexico!” He would deserve condemnation. And you can bet he would get it. His name and address would be all over social media, and his future would be destroyed. But when an Indian activist shouts it? We shrug, and move along.

Robby Soave, of the secular libertarian Reason magazine, reviewed the complete footage of the event. (It was taken by Black Hebrew Israelites, not MAGA kids). Here’s what he saw:

Far from engaging in racially motivated harassment, the group of mostly white, MAGA-hat-wearing male teenagers remained relatively calm and restrained despite being subjected to incessant racist, homophobic, and bigoted verbal abuse by members of the bizarre religious sect Black Hebrew Israelites, who were lurking nearby. The BHI has existed since the late 19th century, and is best describes as a black nationalist cult movement; its members believe they are descendants of the ancient Israelites, and often express condemnation of white people, Christians, and gays. DC-area Black Hebrews are known to spout particularly vile bigotry.

Phillips put himself between the teens and the black nationalists, chanting and drumming as he marched straight into the middle of the group of young people. What followed was several minutes of confusion: The teens couldn’t quite decide whether Phillips was on their side or not, but tentatively joined in his chanting. It’s not at all clear this was intended as an act of mockery rather than solidarity.

One student did not get out of Phillips’ way as he marched, and gave the man a hard stare and a smile that many have described as creepy. This moment received the most media coverage: The teen has been called the product of a “hate factory” and likened to a school shooter, segregation-era racist, and member of the Klu Klux Klan. I have no idea what he was thinking, but portraying this as an example of obvious, racially-motivated hate is a stretch. Maybe he simply had no idea why this man was drumming in his face, and couldn’t quite figure out the best response? It bears repeating that Phillips approached him, not the other way around.

And that’s all there is to it. Phillips walked away after several minutes, the Black Hebrew Israelites continued to insult the crowd, and nothing else happened.

The Desperate Urge to Virtue Signal

Why on earth would conservatives, of all people, instantly believe tendentious media reports? Why think that MSM organs would be fair to people who were all:

That list of attributes alone makes them public enemy number one in your average newsroom. Shouldn’t the barest minimum of fair-mindedness lead you to withhold judgment until you have more of the facts? Or how about this: Loyalty to your fellow pro-life Americans. Don’t rush to be the first to shoot your own wounded.

Sad to say, what we saw was conservatives and clerics terrified of the leftist media mob, throwing teen-aged boys to the crocodiles in the hope that they would get eaten last.