Supreme Court Justice Samuel Alito temporarily halted a Louisiana abortion law late Friday which had been set to go into effect Monday. The law is halted through Thursday and Alito noted in his brief order that the Justices need time to review the filings in the case and the order “does not reflect any view regarding the merits of the petition for a writ of certiorari that applicants represent they will file.”

The 2014 law requires doctors at abortion clinics to have admitting privileges at a local hospital within 30 miles of the clinic.

The Center for Reproductive Rights petitioned the Supreme Court to halt the law last week after the Fifth Circuit Court of Appeals upheld it. They argued that the law was “identical” to a Texas law the Court struck down in Whole Woman’s Health v. Hellerstedt in 2016 and would severely reduce abortion access for women in the state.

In their order upholding the law, the Fifth Circuit Court of Appeals examined the practical effects it had on Louisiana’s abortion providers and concluded that “no clinics will likely be forced to close on account of the Act.”

“If the Act were to go into effect today, both Women’s and Hope could remain open, though each would have only one qualified doctor,” they wrote of the state’s clinics. “Delta would be the only clinic required to close, as its only Doctor, Doe 5, does not have admitting privileges within 30 miles. Because obtaining privileges is not overly burdensome, however, the fact that one clinic would have to close is not a substantial burden that can currently be attributed to Act 620 as distinguished from Doe 5’s failure to put forth a good-faith effort.”

Justice Alito could act on the request himself but is more likely to refer it to the full court. The case should be an interesting test on the abortion issue for Justices Neil Gorsuch and Brett Kavanaugh should the full court take it up. A conservative justice would have to side with the liberal justices in order to grant the requested stay on the issue.

The similar Texas law in Whole Woman’s Health v. Hellerstedt was struck down by a 5-3 vote in which Justice Anthony Kennedy, who has since retired, joined with the liberal justices in voting to strike down the law. Only eight justices ruled on the case as the decision took place after the death of the late Justice Antonin Scalia.

Conservative Justice Clarence Thomas recently accused his colleagues of avoiding the abortion issue and this case could provide some clarity into how the newly-appointed Justices will rule on such matters.

Abortion advocates signaled their concern over the case this past week, even going so far as to claim that it could mean danger for Roe v. Wade.

If SCOTUS denies this application, it could effectively ban abortion in Louisiana—and signal IMMEDIATE danger for Roe.

The Supreme Court may kill Roe v. Wade as soon as this week

The final days of the right to choose are nigh.

199 people are talking about this 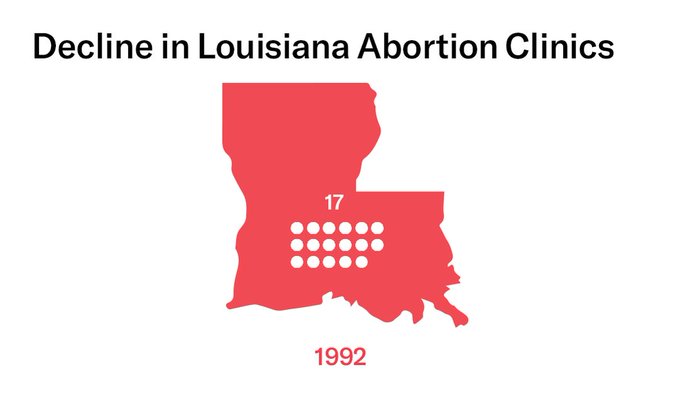 Anti-abortions politicians have already pushed abortion so far out of reach in Louisiana that there are only 3 clinics left.

If SCOTUS doesn’t step in by Monday – there will only be one doctor left in the entire state. https://www.scotusblog.com/2019/01/justices-asked-to-enter-abortion-fray/ …

Louisiana Attorney General Jeff Landry argued in a recent statement that the abortion clinics are misrepresenting the effects the law will have on them.

“As the Fifth Circuit explained, one plaintiff physician unilaterally refused to submit documentation necessary for him to obtain admitting privileges,” he wrote. “Another physician at the same clinic threatened to cease performing abortions if Act 620 goes into effect, albeit with shifting justification, and despite his already having admitting privileges that comply with Act 620. Plaintiffs refuse to grapple with those facts, and instead engage in ad hominem attacks on highly respected Fifth Circuit judges.”