Leading Imam Calls for Major Re-Think Among Muslims on Persecution, Sharia. Is That Even Possible? The Vatican-linked headline service AsiaNews offered an encouraging story this week. It reported on remarks by Nîmes (France) imam Hocine Drouiche. He’s vice president of the Conference of Imams of France. Drouiche called for fundamental reforms in Islamic teaching and practice. He cited the mass rape and sex trafficking of non-Muslim girls by the Islamic State (ISIS). Drouiche admitted that ISIS justified these crimes by citing Islamic precedents and law books. Real ones. So he’s calling for change inside Islam.

Facing Facts About Rape in Islam

Drouiche is worth quoting at length:

Suad Salih is a well-known female face in the School of Theology at Al-Azhar mosque, well known in Egypt and the Muslim world. She stated that Muslims have the right to have their enemy’s wives for their own pleasure during war because this is lawful and authorised in Islam!

Even if it is authorised and covered by religion or Sharia, there is only one clear way to describe this as “recommended legalised rape.” Would this professor have said the same, if Muslim women were raped by the enemies of Muslims? Surely, Muslims would have stood up, spoken out loud, and protested against such a thing, calling it a violation of human rights. No one can allow the values of human rights to be used only one way, and not consider them when Muslims commit such horrors.

Islam suffers from a serious legal vacuum on rape because it considers every extra-marital relationship as adultery without asking whether or not such a relationship is consenting, or committed by force against and compulsion of women. However, forced sexual relationship is rape even if it takes place in a married couple.

When I heard Suad Salih, I remembered the testimony of a courageous Iraqi Yazid woman, Nadia Taha, who was kidnapped by Daesh along with 150 Yazidi women. In front of the Security Council, she recounted the horror and cruelty of Daesh.

When a sex market was set up in Mosul, a sexual slavery exchange was created to separate young girls from their parents and their families to sell to monsters. The source for this could be found in the books published by Al Azhar and all the Islamic universities, containing justifications and other inhuman religious dictates that authorise the rape of women, girls and even children because they are not Muslims!

These books are part of the official curricula of universities and centres that train imams in almost all Muslim countries, even though all these countries have signed the Geneva agreements on conflicts and the various UN conventions relating to conflict situations.

Nadia described how she begged her kidnappers to be raped by a smaller man because she had been handed over to a tall and huge man who terrified her! She was raped before being passed on to another friend because the slave loses his or her humanity and becomes an object possessed like a car, a dog or a toy. It is time to burn these books that teach young Muslims about cruelty, slavery and the rape of women.

The most surprising thing is that Suad Salih, who supports sexual slavery and the rape of Jews, Christians, Yazidis, etc. … is considered the most moderate example in Egypt and in the Arab-Muslim world!

Is it really possible in this case to blame Daesh [ISIS], since all these fatwas are circulated, taught and repeated, including at an official level, in all Islamic universities in the Muslim world?

Burning All Those Books

Muslim terrorism, including slavery and sexual slavery, will vanish after the burning of all those books that teach Muslims, young and old, as well as imams such cruelties and barbarities. Otherwise these universities and religious centres will continue to create different brands of Daesh [ISIS], Al-Qaida, Aqpa, Aqmi, Boko Haram, Shabab, al-Nusra Front, not to mention Ansar Dine, Ansar al-Sharia, etc. 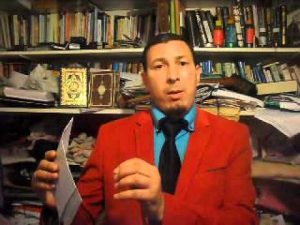 The Imitation of Muhammad

Drouiche is not pointing to some degenerate later practices. Or abuses that developed in Islam hundreds of years after its founding. (I’d cite Christians killing “heretics” in the name of Christ. It took centuries for all Christians to renounce such persecutions.)

No, the capture of “infidel” women from their husbands and their use as sex slaves goes way back. To Muhammad himself. And for an orthodox Muslim, all Muhammad’s deeds stand as praiseworthy. We Christians consider Jesus without sin. So Muslims see their prophet as the perfect exemplar for Muslim men. Islam is in that sense the imitation of Muhammad. As Graeme Wood wrote in The Atlantic:

Virtually every major decision and law promulgated by the Islamic State adheres to what it calls, in its press and pronouncements, and on its billboards, license plates, stationery, and coins, “the Prophetic methodology,” which means following the prophecy and example of Muhammad, in punctilious detail. …

Second only to the Quran are the oral traditions about Muhammad (hadiths or “ahadith”). Muslims treat them roughly as Christians do early Church councils like Nicaea. Read this passage from Abu Dawud. Sunni Muslims (the vast majority) accept him as authoritative.

Abu Sai’d al-Khudri said : The Apostle of Allah (may peace be upon him) sent a military expedition to Awtas on the occasion of the battle of Hunain. They met their enemy and fought with them. They defeated them and took them captives. Some of the Companions of the Apostle of Allah (may peace be upon him) were reluctant to have intercourse with the female captives in the presence of their husbands who were unbelievers. So Allah, the Exalted, sent down the Qur’anic verse: [Sura 4:24) “And all married women (are forbidden) unto you save those (captives) whom your right hands possess.” That is to say, they are lawful for them when they complete their waiting period. (1479)” Abu Dawud vol.2:2150 p.577

Let’s say that Muslim reformers got past this. That they somehow overcame the obstacle of Muhammad’s example. They face a deeper problem. Pope Benedict XVI noted it in his famous Regensburg Address. Most Muslims do not believe that theology is finally subject to reason. Most Christians believe in natural law. We find it rooted in the real goodness of God, which is at least analogous to ours. So it couldn’t be “good” for God to break His promises, or lie, or punish the innocent.

Some Muslims believed that, more than a thousand years ago. But they lost the battle inside Islam. Now most Muslims consider such people heretics. Robert Reilly explains it in his lucid, fascinating book The Closing of the Muslim Mind. He recounts the Mutazilite movement from the eighth to the tenth century, which challenged Islamic anti-rationalism.

But read him to the end. It wouldn’t be right to call the Mutazilite moment a Muslim “Renaissance.” Or especially a “Reformation.” It was more like the radical Enlightenment. (Think Diderot or Voltaire.) Yes, some Muslims accepted the primacy of divine reason over divine power. But they quickly abandoned many other Muslim tenets. They just stopped making sense. In that sense Islam is brittle. Christianity and Judaism aren’t.

Orthodox Muslims saw the danger. They corrected it. They insisted that God is above reason. Only his ultimate power over the universe is decisive. What he says is true. What he does is right. There’s no warrant for explaining away apparently appalling parts of the Quran. (Such as the right to kidnap and rape infidel women.) No authority could be higher. There is no “spirit” of the Quran that could supersede a literal reading.

There’s only one way imam Drouiche’s reforms could succeed. That’s if a kind of Mainline liberal Protestantism swept Islam. The rest of the world should welcome that. (It’s a fate one wishes on institutions one dislikes.) But don’t expect most Muslims to.