Culture of Rebuke Has Taken Hold in Church Discourse

The Injustice of Social Justice The violent left-wing group refusefacism.org is planning to start protests on Saturday until President Trump is removed from office. The effort asserts that “The Trump/Pence Regime is a Fascist Regime.” Organizers claim Trump’s presidency is illegitimate. The effort includes a broad coalition of groups such as the Revolutionary Communist Party. 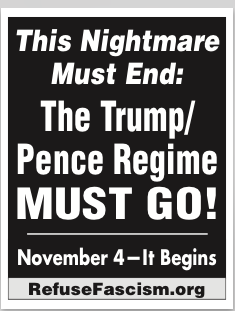 On November 4, 2017: Take To The Streets And Public Squares in cities and towns across the country continuing day after day and night after night — not stopping — until our DEMAND is met:
This Nightmare Must End: The Trump/Pence Regime Must Go!
In the Name of Humanity, We REFUSE to Accept a Fascist America!

There’s even a list of prepared tweets for protesters. The group presents their protest against the “nightmare” as a matter of life and death. “It can already be said of Trump/Pence that ‘first they came for’ the Muslims, then the Mexicans.”

Then all refugees. Then women. Then Black and Latino people. LGBTQ persons. The environment, and anyone who doesn’t conform or submit to their vision and plan for a nation cohered around white supremacy and a political form of Christian fundamentalism, that should rightly be called Christian Fascism.

Protests are planned in nineteen cities, including New York and Washington. They’re almost all Democratic cities, located in mostly blue states. Some speculate the group avoided red areas of the country due to higher percentages of gun owners. Also, the police are less likely in red areas to look the other way at violence.

Remove Trump From Office, But How?

“We formed this organization around two main points,” Andy Zee, one of the group’s organizers, told The Washington Post. “One is that the nightmare must end, and second, in the name of humanity we must refuse to accept a fascist America.”

They hope to emulate the South Korean mass protest movement. It began in October 2016 and led to President Park Geun-hye’s removal from office in March. The movement, he says, “captures how millions of people feel right now … where you may face persecution or even death.”

Zee is fully aware the mainstream media leans to the left. He intends to enlist their help. He says, “CNN, MSNBC, The New York Times, and The Washington Post ‘must go all out’ to “hound the enemy.’” The group cleverly took out a full-page ad in The New York Times that almost looks like part of the actual paper.

Refuse Fascism claims that Trump is a modern form of Hitler who is starting a new Nazi regime in the U.S. “The Trump/Pence regime is more dangerous to the world than even Hitler. … There is method to Trump’s madness that echoes Hitler.” One call to action uses that comparison to motivate activists. “Those who lived through Nazi Germany and sat on the sidelines, looking on as Hitler demonized, criminalized, and eventually rounded up one group after another, became shameful collaborators with monstrous crimes.”

The “Resistance” and Al Qaeda

Refuse Fascism claims that it opposes violence, but it speaks in the most violent, extreme way about “Trump/Pence.” And the images they like don’t encourage trust in their non-violence. Refuse Fascism ATL’s poster asks includes an image of a pole poked through Trump’s severed head, drawn as a pig. There are flies buzzing around it.

Law enforcement in big cities around the country are making preparations in case their actions fit their speech.