LifeSiteNews: Will Bishops Look at Why Millennials are Fleeing the Church? The answer is closer than they think

June 21, 2019 (LifeSiteNews) – The US Bishops are wrestling with the mass exodus of a half of a generation from the U.S. Church, one of their Committee heads has said, but while the Bishops appear to be concerned and eager to address the issue, the question remains as to whether they will take an honest and comprehensive look at why this is happening.

An effort to engage young people on social media by the US Bishops at their spring General Assembly last week suggests that the US Church persists in unwillingness to admit that many young people, and others, desire what’s been lacking for countless Catholics for decades – solid teaching of the faith and a return to Traditional, if not at least reverent liturgy.

Half of all millennial Catholics have left the Church, according to Bishop Robert Barron, United States Conference of Catholic Bishops (USCCB) Evangelization and Catechesis Committee chair, and kids are deciding to leave at a frighteningly young age. Further, his stats say, for every incoming convert, more than six people are leaving the Church.

‘A bitter fruit of the dumbing-down of our faith’

Barron presented those numbers and more pertaining to the “nones,” or the religiously unaffiliated, to the US Bishops at their spring meeting in Baltimore, describing the problem as the second most important issue facing the bishops behind the Church’s clergy sex abuse scandal.

To quote, Barron called it “the massive attrition of our own people, especially the young.”

“To look at this issue of who are the unaffiliated, why are they leaving and how do we get them back, I think is a top priority for our Church,” he said.

His fellow bishops agreed, as evidenced by numerous comments following the presentation.

For his part, Barron conceded before the Assembly of Bishops that this phenomenon of young people fleeing the Church is “a bitter fruit of the dumbing-down of our faith” as it’s been imparted in catechesis and apologetics.

His concession aptly describes the success to which the US Bishops have, over the course of more than just the last generation, met the first component of their mission as prelates to teach, govern and sanctify.

While Barron didn’t focus on liturgy or worship, conventional wisdom is that theology, or Church teaching, and liturgy are interwoven – in general, typically how one prays is tied to how they believe.

LifeSiteNews submitted an interview request to Barron during the Bishops’ meeting in Baltimore on the subject of his Committee’s plan to get the nones back into the Church, and did not receive a response.

The USCCB posed a question on Twitter to young Catholics right as Barron stood before the Bishops, presenting on the mass departure from the Church, the tweet asking those who’ve remained in the Church why they stayed. It netted ample responses pointing to Traditional liturgy and doctrine.

And if the USCCB’s Twitter response is an indicator – a response of non-response to those hungry for Tradition – Catholics can expect more of the same bitter fruit from the bishops.

The Bishops’ Twitter account was uncharacteristically garrulous during the Bishops’ meeting, enough to arouse questions, since the chattiness was a change from the past.

Catholic News Agency (CNA) looked into the matter, and promptly conducted an interview with the USCCB Twitter account’s administrator, 31-year-old Connie Poulos, content and marketing coordinator for the Bishops’ Conference.

Poulos said the Twitter account’s personality change was part of a plan to give a more humanizing look at the Bishops, CNA reports, and to have a higher level of engagement with the account’s 156,000 followers.

Poulos said the Bishops decided to up the level of engagement in the aftermath of the Theodore McCarrick sexual misconduct scandal.

“We just kind of decided, ‘look, all bets are off,” Poulos told CNA. “We’re just gonna be us, we’re going to use this account to engage.’”

Poulos said she’d been instructed to “be bold” on the Internet.

“Then I took that and ran with it,” she said, starting with her tweets at the spring General Assembly.

Not the ‘felt banners and superficial platitudes’

Much of the response came when the USCCB had tweeted a photo of Barron speaking to the Assembly about young Catholics leaving the Church, with the caption, “If you are a young Catholic who is still Catholic, what has made you stay?”

If you are a young Catholic who is still Catholic, what has made you stay?#USCCB19 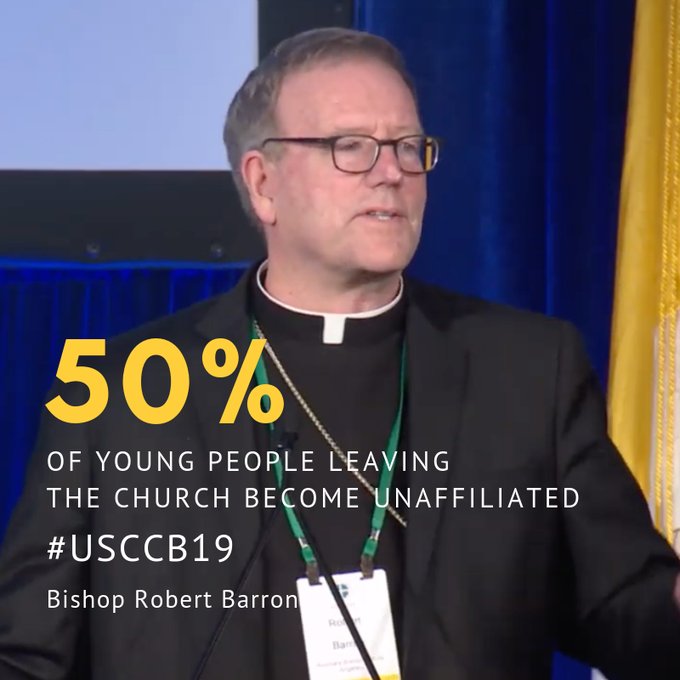 Referencing his return to the Church, one Twitter user gave examples of things that had pushed him away, listing “felt banners and superficial platitudes.”

“Beautifully said,” the USCCB tweeted in response. “I’m… not sure anyone likes the felt banners.”

Felt banners being a recognized symbol of the U.S. Church’s fall from solid liturgy, this response set off much of the Twitter commotion in its acknowledgement of the vapidity that has pervaded so much liturgy and teaching of the faith over the last 50 or so years.

But what didn’t occur in the wake of the tweet was also telling.

Many replies to the USCCB’s question called for Tradition in liturgy and teaching, however those responses on the whole did not receive acknowledgement. This was in contrast to the level of response to other replies.

“The Mass of Ages,” one tweet said, sharing a beautiful photograph of the Traditional Latin Mass.

“Because holy men still exist even amidst the many clowns,” said another that shared a split panel of photos, on the left, a cardinal praying reverently before the Blessed Sacrament, and the right, a priest in a dreadful clown costume – denoting the “clown Masses” that have also typified the Church’s liturgical fall over the last few decades.

A third tweet said: “I converted to the Catholic faith at 25 years old – because Catholicism is TRUE. I found the Latin Mass and immersed myself in the works of the Saints and traditional catechetical materials. Young people don’t need a watered down, easy faith – we need the support of our Bishops!”

“This is the same issue that’s hit a lot of the “seeker friendly” type protestant churches,” said a fourth. “Young people don’t want feel-good self-helpism. They can get that anywhere. They want the truth. The hard truth.”

A priest tweeted: “Discovering that real Catholicism was something different than what the bishops were sponsoring in their dioceses. Until we face up honestly to the fact that the bishops and their apparatus have failed utterly for decades in even the basics, we will lose yet another generation.”

Another priest said: “We need bishops who can distinguish between intrinsic evils and matters of prudential judgments. The inability to do so causes great confusion among the faithful.”

“The truth in the teachings of Christ passed down through the apostles and bishops.”

“The traditional Latin Mass, a solid Catholic upbringing (thanks Mom), and good, holy priests in the confessional.”

“The Masses the Youth are walking away from, are not the Mass as expressed in Sacrosanctum Concilium, they’re not even consistent with the Paul VI Missal today.”

Some of the answers to the USCCB’s question that called for Tradition and doctrine were more critical, some were less so, but in general they received little or no response from the USCCB.

The statistics Barron presented to the Bishops were indeed disturbing:

What are their reasons for leaving? Barron’s committee found that young people no longer believe the Church’s teachings and that faith to them is illogical or unscientific. They believe instead in relativism and a culture of self-invention.

Another presentation, another video

Barron, an auxiliary bishop of Los Angeles and the founder of Word on Fire Catholic Ministries, a popular media apostolate, has been working with a group he called “key national experts,” which he assembled to help the Evangelization and Catechesis Committee address the issue.

He told the bishops his Committee would present on the issue again during the Bishops’ next meeting in November at a lunch workshop.

Barron also committed to producing a video about it for distribution to the bishops, and said as well he would lay out nine paths to attract the nones back to the Church.

There are certainly numerous possible reasons for a person of any age to leave the Church.

And it’s possible that the USCCB, even as it opted largely for non-engagement over Tradition via Twitter, made note of the responses for its Evangelization and Catechesis Committee and the Committee’s work going forward.

Time will tell, and concerned Catholics will observe whether Barron, his experts and his Committee will acknowledge and embrace what was clearly expressed to the USCCB via its Twitter account last week – that young Catholics and others hunger for Tradition and solid Catholic doctrine – and also if the Bishops will continue on the road unfortunately too often taken.