Marcus Grodi: I Have Come to Believe and to Know

Msgr. Charles Pope: A Meditation on an Often-Forgotten Advent Hymn

Nothing Says Woman Quite Like a Dress, by Diana T. Kilarjian Recently, a non-Catholic Historian posted several challenges in an online dialogue with some well-known Catholic bloggers concerning why they remain in the Catholic Church in the midst of this present scandal. I appreciated the debate, but didn’t stick my toe in the water because I know I’m not a “worthy enough swimmer.” However, having had the undeserved privilege of interviewing nearly a thousand converts/reverts to the Catholic Church over the past twenty-plus years, may I give one simple response.

Often I’ve been asked what are the most common reasons that non-Catholic Christians become Catholic Christians—or why they should. My Staff and I could make a long list, with authority, truth, and beauty being at the top. But truly, the real reason, and the one most common and important thread that runs through all the conversions I have heard or read, is the mysterious work of grace.

Now, I can almost hear the gears in the minds of any non-Catholic reader working to counter my suggestion—even rising in angst that I would have the audacity to propose some kind of Gnostic gift of graced insight. But seriously, the Historian hit the nail on the head when he noted that “knowing” is the operative word in the Lumen Gentium 14 (Catechism §846) statement: “Hence they could not be saved who, knowing that the Catholic Church was founded as necessary by God through Christ, would refuse either to enter it or to remain; of the Catholic Faith, will only fall flat and prove inconsequential, unless the gift of grace has first opened a person’s heart and mind. If this has truly happened, it doesn’t (or at least shouldn’t) make the recipient arrogant about their discovery or their “intellectual prowess”, but humbly grateful. And also, once this has happened, it doesn’t guarantee that the person will respond to this grace and become a Roman Catholic, or always remain one, for again I know from experience, that a response to grace is always an invitation to the spiritual battle. 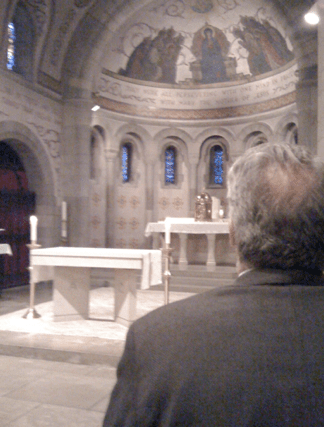 Unfortunately, during this challenging time of scandal in the Church, these apologetic arguments seem even less convincing, even offensive to many outside the Church, and even for many inside the Church! But as I’ve written elsewhere, my heart has been so changed by the mercy of God’s grace, that my only answer remains that of St. Peter, “To whom shall we go?” (Jn 6:88)

The context of this statement from St. John’s Gospel is very significant. In response to the rejection of His “hard saying” concerning the eating of His body and blood, our Lord said “no one can come to me unless it is granted him by the Father” (Jn 6:65). In other words, by the inner working of grace. “After this many of his disciples drew back and no longer went about with him” (Jn 6:66). For whatever reason, most either were not given the grace to believe, or they freely resisted the grace and rejected Christ. But those few who responded freely to this grace—the Twelve, led by Simon Peter, who would become the foundation of the Church—confessed to our Lord: “You have the words of eternal life; and we have believed, and have come to know, that you are the Holy One of God” (Jn 6:68-69). By grace they had come to “know”, and therefore no matter how hard things got, they would not abandon Christ. Yet, still, even with the grace and the knowledge, we are always free to turn away, as one in that small group eventually did—surrendering to the temptations of the devil, as apparently some in our present Hierarchy have done (“Put not your trust in princes,” Ps. 146:3f).

One might argue that this was all about coming to the knowledge of Jesus as Christ and Lord, but when St. Paul was persecuting the Church, Jesus, in one of the most miraculous interventions in the history of the world, said to him, “Saul, Saul, why do you persecute me?” (Acts 9:4)

The Historian asked in his second article whether there was a “line” that cannot be crossed before a person stops “knowing” that the Catholic Church was founded as necessary? Seriously, for me, the only “line” I can think of that could be drawn would be some kind of irrefutable historical evidence that would also undercut my belief in Christianity altogether—i.e., the very bones of Jesus are found and irrefutably identified. As another blogger proposed, “even if every bishop is found to be serial rapists and murderers”, I could not go back to Protestantism or even Orthodoxy, because I know (i.e., have come to realize) in my heart that the Catholic Church is not only the Church, but the very Body of Christ. And just as our Lord and St. Paul both warned that a husband must not leave his wife, regardless of how unacceptable she might become, neither can I leave His Body.

There were lots of lame people around the pool at Bethesda, but Jesus only healed one. Why? I don’t know.

Nor do I know why Jesus opened my heart to Him when I was a 21-year-old stubborn, fallen-away-Lutheran, scientific materialist, but by grace He did.

And I don’t know why He opened my heart to His Church when I was a 40-year-old “successful” Presbyterian pastor, but by grace He did.

Why doesn’t Christ open the hearts of more non-Catholic Christians to the Catholic Church? I don’t know. The Scandal? The data my Staff and I keep in our work with the Coming Home Network shows that neither the scandal of 2002 or the present scandal have had any deleterious impact on the flow of inquirers and converts—our ministry continues to receive 2-5 new contacts every week from non-Catholic Christian clergy and laity wanting to learn more about the Catholic Church. But the knowledge of “why” is above my pay-grade. My responsibility is only to follow my Lord Jesus Christ; to trust Him; to trust and be grateful that He brought me home to His Church for a reason; to be the best husband, father, grand-father, and leader (and maybe farmer) I can be by grace; and whenever possible to “give a reason for the hope that is within me.”

For example, I don’t know why this particular non-Catholic Christian Historian isn’t open to the fullness of the Catholic Faith. Maybe God hasn’t given him the grace to be open to the Church, or maybe our Lord has, but he just isn’t interested or his anti-Catholic wounds are just too deep. But none of that is my business. My only responsibility is to tell, and to demonstrate the work of God’s love and grace in my life. And to pray for him, that he will respond in faith to all the grace God gives him, so that one day he may enter through that very narrow gate.

PS: I generally try to stay away from the blogosphere per St. Paul’s advice to St. Timothy: “O Timothy, guard what has been entrusted to you. Avoid the godless chatter and contradictions of what is falsely called knowledge, for by professing it some have missed the mark as regards the faith. Grace be with you.”