This is the second in a series of articles on the Four Last Things: Death, Judgment, Heaven, and Hell. 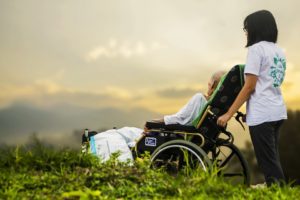 For the faithful, the day we die is the greatest day of our life on this earth. Even if some final purifications await us, the beatific vision for which we long lies just ahead; our exile in this valley of tears is ended.

Is calling the day we die the greatest day of our life too strong a statement? I have seen some fellow Christians wince at this statement. In this age of emphasis on worldly comforts, medicine, and the secular, we rarely speak of Heaven—or Hell for that matter. I wonder if we have lost some of our longing for Heaven and cling too strongly to the trinkets of this life.

At the funeral of a relative several years ago, I was approached by a friend of the family. She was an unbeliever, a self-described secular humanist, and she made the following comment to me: “Perhaps there is Heaven for the faithful who believe that there is life after death, and perhaps, then, for them the day they die is the greatest day of their life, but I do not observe that Christians live as if they believe this. It seems to me that they are as anxious as anyone else about dying and earnestly seek to avoid death just as much as anyone else.”

It was a very interesting observation, one that I found mildly embarrassing even though I quickly thought of some legitimate explanations. Even after giving her some of those explanations, some of the embarrassment lingered as to the kind of witness we Christians sometimes fail to give to our most fundamental values. Based on her remark—and I’ve heard it before—most of us Christians don’t manifest a very ardent longing for Heaven.

Even Jesus, in His human nature, recoiled at the thought of the agony before Him—so much so that He sweat blood and asked that the cup of suffering be taken from Him if possible. Manfully, though, He embraced His Father’s will, and our benefit rather than His own. Still, in His humanity, He did recoil at the suffering soon to befall Him.

Despite this hesitancy to meet death, for a faithful Christian the day we die is the greatest day of our life. While we ought to regard the day of our judgment with sober reverence, we should go with joyful hope to the Lord, who loves us and for whom we have longed. That day of judgment, awesome though it is, will for the future saint disclose only that which needs final healing in purgation, not that which merits damnation.

We don’t hear much longing for our last day on this earth or for God and Heaven. Instead, we hear fretting about how we’re getting older. We’re anxious about our health, even the natural effects of aging. And there are such grim looks as death approaches! Where is the joy one might expect? Does our faith really make a difference for us or are we like those who have no hope? Older prayers referred to life in this world as an exile and expressed a longing for God and Heaven, but few of today’s prayers or sermons speak this way.

Here are some of the not-so-legitimate reasons that we may draw back from dying:

This perfect storm of comfort and worldliness leads to slothful aversion to heavenly gifts. That may be why, when I say that the day we die is the greatest day of our life, or that I’m glad to be getting older because I’m getting closer to the time when I can go home to God, or that I can’t wait to meet Him, people look at me strangely and seem to wonder whether I need therapy.

No, I don’t need therapy—at least not for this. I’m simply verbalizing the ultimate longing of every human heart. Addiction to comfort has deceived and seduced us such that we are no longer in touch with our heart’s greatest longing; we cling to passing things. I would argue (as did my family friend) that we seem little different from those who have no hope. We no longer witness to a joyful journey to God that says, “I’m closer to home. Soon and very soon I am going to see the King. Soon I will be done with the troubles of this world. I’m going home to be with God!”

There are legitimate, understandable reasons for being averse to dying, but how about even a glimmer of excitement from the faithful as we see that our journey is coming to an end? St. Paul wrote the following to the Thessalonians regarding death: We do not want you to be like those who have no hope (1 Thess 4:13). Do we witness to the glory of going to be with God or not? On the whole, it would seem that we do not.

The video below features a rendition of the hymn “For All the Saints Who from Their Labors Rest.” Here is a brief passage from the lyrics:

The golden evening brightens in the West,
Soon, soon, to faithful warriors cometh rest.
Sweet is the calm of Paradise most blest. Alleluia!