Obama Unleashed a Genocide, and Trump Stopped It

Blog: Third Lightning Strike of St. Peter’s Basilica: What Does It Mean? Photo:  The combo of file photos shows Doctor Denis Mukwege, from the Democratic Republic of Congo, left, on Nov. 26, 2014 and Yazidi woman from Iraq, Nadia Murad on Dec. 13, 2016 as they both address the European parliament in Strasbourg, France. The Nobel Peace Prize on Friday, Oct. 5, 2018 was awarded to the Congolese doctor and a Yazidi former captive of the Islamic State group for their work to highlight and eliminate the use of sexual violence as a weapon of war.

Nadia Murad just won the Nobel Peace Prize, along with Congolese doctor Denis Mukwege “for their work in fighting sexual violence in conflicts around the world.” Murad is a Yazidi woman who was captured by ISIS and forced into sexual slavery. Then she escaped. She became an activist on behalf of her persecuted people and other victims of ISIS.

For insight on this important award, we turned to Stream columnist Jason Jones. He has advocated on behalf of Yazidis and Christians in Syria and Iraq, traveling extensively in war-torn regions of those nations. In 2017, he brought Yazidi activists to meet key figures in Washington, including Vice President Mike Pence.

Please tell us about the plight of the Yazidis. Why does ISIS single them out, along with Christians?

Sure. But first I want to thank the Nobel Committee for making this choice. I’m especially moved that they chose Ms. Murad. Her work has been astonishingly courageous. It’s crucial for waking up the West to the plight of vulnerable peoples in the Middle East.

When ISIS attacked Iraq in 2014 and took over Mosul, it also captured rural hamlets in the surrounding area. ISIS treats the Yazidi more horribly than they treat Christians and Muslims. That’s because ISIS does not consider Yazidi “people of the book.” That was the pretext. But at the end of the day, what those men really cared about was war booty and human trafficking. ISIS used Yazidi women the same way the Japanese used Korean “comfort women,” that is as sex slaves.

Anybody who is unarmed and unprotected, ISIS will attack. They will kill the men and take their property. Then corral the women, send them to slave auctions and literally sell them off to the highest bidders, who then get to rape them at will.

Throughout the Middle East, pious Muslims refer to ISIS as takfirs. Takfiri means to excommunicate. So a takfir is someone who takes it upon himself to excommunicate other people. ISIS does that to other Muslims, as a pretext to rob, rape and murder them just as they would “infidels.” Imagine gangbangers running around the streets of America excommunicating children before gunning them down in drive-bys. That is the absurdity of the situation. 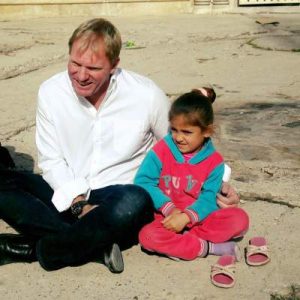 Jason Jones with a Yazidi girl in Iraq.

You have traveled to the Yazidi areas in Iraq and Syria. Please tell us about your experiences there.

I visited recently liberated towns and hamlets that were still smoldering. The Kurds had liberated them from ISIS’s reign of terror. At one point, I asked, “What is that disgusting smell?” A recently retired intelligence officer answered me. “It’s the worst smell in the world. Burning human flesh.” Our Peshmerga guide apologized for not being able to remove the bodies from the burning buildings. ISIS had booby-trapped the rubble.

One awful thing about these towns: There were no men. It was almost all women. All the men were dead.

How well informed are Americans about the atrocities the Yazidi suffered?

They are not informed at all. Some 6,000 Yazidi women got taken as sex slaves, while Barack Obama did nothing. What did that say about us as a country? These weren’t just numbers. They are people. Daughters, sisters, mothers. They have hopes and dreams just as we do.

The plight of the Yazidi was the fruit of the American electorate lacking the will to finish what we started in Iraq. It is the poison fruit of the electing Obama as Victimist in Chief. That is, someone who feigns concern for the vulnerable, as a route to gaining power. Then condemns them to genocide. That’s what Obama did to ethnic and religious minorities in Iraq and Syria.

You brought a Kurdish and a Yazidi refugee to Washington, D.C. to talk about their experiences. Whom did you meet with? How knowledgeable are American leaders about this situation?

To be blunt, our leaders for the most part are neither informed nor interested. Two honorable exceptions? Vice President Mike Pence and Congresswoman Tulsi Gabbard (D-HI). They’re informed and they care. They took time to meet with us and listen.

We also went to the UN in New York. I sat with these two women who’d survived ISIS, and watched both of them fume. UN officials kept pontificating to them that global warming was the greatest reason why people get turned into refugees. Not terrorists like ISIS.

As soon as we withdrew, the Iraqi government started selling positions, weapons, rations. For example, a Major General’s rank was going for $250,000. It wasn’t even soldiers buying such ranks, but people off the street. Why? To gain control of a huge military budget, most of it U.S. taxpayers’ dollars. They pocketed most of the money. I wonder how much the Iraqi Minister of Defense paid for his office. Rumors say it was tens of millions of dollars.

This seems pretty obvious. It was the Obama administration’s shock withdrawal of U.S. forces from Iraq. In December 2011, the Iraqi government was not ready to protect the country. Our Department of Defense knew that, and told Obama. Our troops did much more than just fight terrorists. They provided oversight of the whole Iraqi military apparatus. They watched over the weapons we’d supplied to Iraq. Even the uniforms we’d sent them. As soon as we withdrew, the Iraqi government started selling positions, weapons, rations. For example, a Major General’s rank was going for $250,000. It wasn’t even soldiers buying such ranks, but people off the street. Why? To gain control of a huge military budget, most of it U.S. taxpayers’ dollars. They pocketed most of the money.

10,000 U.S. soldiers would have been enough to maintain order. To prevent the genocides that raged under Obama’s nose. We had pacified Iraq. This was not another Vietnam. We fled without any reason to flee, because we had succeeded. And chaos erupted, putting all our soldiers’ sacrifices to waste.

Now, what did this mean to a small ethnic minority like the Yazidi? They watched Mosul get plundered by the local government, with Baghdad’s approval. When ISIS attacked, the same corrupt leadership who’d bought their positions just … disappeared. With the leadership gone, the soldiers, many of whom didn’t even have boots, said: “Damn your father, I’m out of here.”

What must we do now to defend the most vulnerable populations in these countries from groups like ISIS? And the jihadist groups which some Americans (like the late John McCain) wanted America to arm and support?

We cannot allow any more massive security vacuums. The best way to do this is an American military presence. Preferably we train the local military. But we cannot just train them and leave. We must keep an active role in logistics, intelligence, and air support. We cannot allow huge pockets of chaos to emerge. That’s where genocides happen.

Should we be the world’s police? No. You and I both opposed the invasion of Iraq in the first place. But America went ahead and broke it. That means we bought it.

We cannot allow huge pockets of chaos to emerge. That’s where genocides happen.

How effective do you think Trump has been at fighting ISIS, compared to Obama?

It’s night and Day. Obama called ISIS the “junior varsity” team. ISIS took Mosul, one of the great cities of the world. They held 30 percent of Iraq’s territory. And ran roughshod over Syria. Obama let all this drag on for more than three years. Then, within three months, Trump’s policies (and brave Kurdish fighters) liberated Iraq and decimated ISIS in large portions of Syria.

If you had President Trump’s ear for five minutes, what would you ask him to do?

Maintain a significant military presence (15,000 to 20,000 troops) in the north of Iraq. In Irbil, in particular, where the Kurds built a very large airport. Kurdistan is a safe and hospitable place. We should support it. That will allow the U.S. to project power in Iraq and elsewhere in the region. The lion’s share of that force should be air power. That allows the U.S. to crush terrorists groups before they grow to a visible and menacing size. I would impress this upon the President: It serves our interests to stand in solidarity with vulnerable ethic and religious communities. Especially if they have been placed in the path of genocide by our foreign policy failures.