Donald DeMarco: There Can Be No Justice Without Truth What would you do if you wanted to transform a starkly supernatural religion centered on mystical sacraments and the consecration of suffering into a pallid, worldly, irrelevant NGO?

Let’s not ask why you’d want to do that. I assume you have … your reasons.

There’s a long list of things I could suggest, of course. Some obvious ones include:

There are many other steps you could take, of course. I know, because U.S. Catholic bishops have faithfully taken them. At least, most of them have. And their central organization, the USCCB, might as well have been organized to spread them across the country. Each year it issues hundreds of public policy statements, many carefully drawn up to read like press releases from left-wing think tanks, gussied up with just enough “Jesus spray” to smell vaguely religious.

But I want to focus on something a bishop just did recently. I don’t know his motives. However, if this bishop were indeed trying to turn the Catholic church into a Mainline post-Protestant real estate holding corporation and NGO, he couldn’t have chosen a better tactic.

To wit: Grab hold of an event that touches the most powerful cords in a Christian’s heart, and transubstantiate it into public policy mush. And that’s exactly what the head of the US Bishops Conference, Archbishop Daniel DiNardo, just went and did.

The indispensable news source LifeSiteNews reported last week on a hideous crime. An armed man burst into a Catholic book store, raped and sodomized two of the women who worked there, then murdered a third (Jamie Schmidt, 53) for resisting the rape. Fr. Brian Harrison, who is not part of Team Post-Christian, wrote eloquently about this heart-breaking event. He did so in the language traditionally used by Christians who believe in the supernatural:

Mrs. Schmidt — shocked, defenseless, and with the barrel of a loaded gun pointed at her head — Just Said No.

With death staring her in the face, Jamie quietly refused to allow her purity, her personal dignity and her marriage covenant to be outraged. And her point-blank refusal to bow to her assailant’s demands was met instantly with a point-blank shot that felled her on the spot. Even then, this monster was not satisfied. With his victim lying right there gravely wounded, he kept on for a while longer insisting that the other two traumatized women continue gratifying his passion before he finally fled the store. Jamie was quickly taken to a hospital but was pronounced dead later that evening.

This tale of indomitable resistance to demonic evil calls for deep reflection. Jamie Schmidt’s act of supreme courage and nobility, called forth immediately in a moment of sudden crisis, clearly did not come from nowhere. The action of grace had been evidently working quietly but deeply in the soul of this lady who had outward lived devoutly but unobtrusively, like any number of other good Catholics…. [H]er good friend and fellow parishioner at St. Anthony’s, Laura Sheldon, commented to the St. Louis Post-Dispatch in last Wednesday’s report, “She was very simple, very modest, very quiet. If you ever needed help, she would be there. That’s just the way Jamie was.” 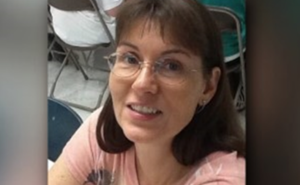 A Saint for Our Times?

As Fr. Harrison pointed out, Mrs. Schmidt is the kind of person we should be honoring, and holding up as a hero. Especially in these times, where we honor sexual compulsion itself as society’s highest god.

The de jure leader of the Catholic church in America, Archbishop DiNardo, took another tack. As LifeSite reports:

“This senseless attack is a painful reminder of how gun violence can tragically alter the lives of those so precious to us,” wrote Cardinal DiNardo. “The Bishops have continually expressed support for reducing gun violence as it reflects the church’s moral teaching on respect for human life at all stages. It is essential for us to be engaged in efforts that help build a culture of life.”

[DiNardo] said nothing about the circumstances of Mrs. Schmidt’s killing, and ignor[ed] the heroic nature of her death which some have hailed as martyrdom.

Bishop DiNardo did not mention “gun control” explicitly, though given his reference to the Bishops’ past statement, we can be sure that that’s what he has in mind. (“Gun violence” is politicized jargon invented by activists who want to ban all private firearms.) Imagine if Mrs. Schmidt had been killed with a knife. Would the proper first response have been to decry knifeviolence? Well, maybe in London, where the local government is trying to ban most pointy objects.

The Democratic National Committee at Prayer

It seems that Archbishop DiNardo is following in the footsteps of the real power in the U.S. Catholic church, Pope Francis’ favorite Chicago Cardinal Blaise Cupich. You might recall that Cupich responded to news that Planned Parenthood illegally takes the tiny, butchered parts of unborn babies and sells them in Styrofoam containers like KFC chicken parts … by equating that crime to cuts in Medicaid, and the deportation of illegal aliens. And, of course, to the danger of Americans having gun rights.

I want to focus on something a bishop just did recently. I don’t know his motives. I’m not bulimic, and can’t read minds. However, if this bishop were indeed trying to turn the Catholic church into a Mainline post-Protestant real estate holding corporation and NGO, he couldn’t have chosen a better tactic.

Now I don’t know the real motives that drive DiNardo and Cupich. But if they were trying to drain all the blood out of the church in America, render it an empty bureaucratic shell, the non-denominational airport chapel for the Democratic National Committee at prayer … they couldn’t be doing a better job. Equating murdered babies to sullen economic migrants. Lumping in a martyr for Christian purity with every other victim of “gun violence.” Taking moments that should touch the Christian heart, and turning them into PSAs for specific political programs.

The results will be simply miraculous. These bishops really do have power to transform bread into stones.