Peter Kwasniewski: The Psychology of Difficulty: Time for a New Youth Strategy

Msgr. Charles Pope: Are You Ready For When the Lord Shall Come?

At the Fota XI conference in Ireland in July 2018, which had the Divine Office as its theme, many participants made remarks about the way in which the recitation of the postconciliar Liturgy of the Hours has severely fallen off in practice. Many clergy, apparently not seeing it as a serious obligation, either don’t pray it at all, or skip it all too readily. This is perhaps less a problem among younger clergy than among older generations, who, in the confusion following the Council, threw off many obligations (clerical clothing, daily Mass, daily Office, etc.) as so many out-of-date constraints by which their “work in the world” was being hampered—or so they thought. In reality, what finally killed their work in the world was the death of the spiritual life, the loss of the primacy of the cult of God over the “needs,” real or imaginary, of Man. This inversion and perversion is what is killing the Church in the West, wherever it is dying.

It is true that, as Matthew Hazell showed in his talk at Fota, there were a fair number of vota from bishops and superiors prior to the Council asking that the “burden” of the Divine Office be mitigated — sometimes considerably, as by the suppression of certain canonical hours, or by the rendering optional of the little hours. As we know, in the end the ancient office of Prime was suppressed without further ado, and the entire breviary stripped down and reorganized into what some critics have called (not unreasonably) “the Liturgy of the Minutes.”

I found most interesting an observation someone at the conference made, who said: If you make a certain obligation too easy, it becomes all the more easy to hold it in contempt. One feels that it is hardly worth the trouble. (A good example of a light burden readily shirked off is the current one-hour Eucharistic fast.) A heavier burden, because it feels heavy, feels serious, and the absence of it is, oddly, uncomfortable. If you are used to bearing a yoke, and suddenly the yoke is lifted, one can feel off-balance, deprived of a companion, naked and exposed, at a loss.

The old office had weight or gravity to it, and the duty to pray it was emphasized strongly in canon law and priestly formation. (It makes little difference, for our present ascetical theme, whether we are speaking about the pre-Pius X or the Pius X breviary; for both placed considerable demands on the clergy.) The sight of a Catholic priest praying his breviary in the sanctuary before Mass, in the pews after Mass, in the bus, on the train, in practically any spare moment, was a familiar sight. One of the participants in Fota told a story about how, before the Council, an elderly priest would stop his car at night, get out, and finish his breviary by the car headlights, in order not to fail in his responsibility.

Now, I have noticed that, as a general rule, there are two and only two ways of making an appeal to young men to discern the priesthood, and something similar can be said for appeals about religious life. The first way is to say (through words, images, music…): “This is going to be incredibly hard. It will demand everything you’ve got. Many won’t be able to hack it. But with God’s help, you just might. We’re not desperate for you, though, so don’t bother to come if you’re not serious.” The second way is to say: “The life of a Catholic priest is wonderful! You get to be so helpful to people every day. It’s bright and cheerful, even fun at times. We need you. We’ll make it work out for you and nothing will be too hard.”

I was thinking about this in connection with a vocations video my son showed me, made by the Russian Orthodox:

This “trailer” for the longer version (also worth watching) obviously and beautifully illustrates the first type of message. And even though it makes use of the nowadays almost obligatory “Gandalf slaying the Balrog” type of soundtrack, it is impressive in its earnestness.

Contrast this virile message with the flaccid tone of all too many Roman Catholic vocational videos, where it is all smiles, handshakes, coffee hours, and the like. For example, this one, from the Archdiocese of Washington, D.C., starts off with a soundtrack that can’t quite decide whether it’s jazz, classical, easy listening, or a movie soundtrack, then features a slick cardinal doing his shtick, followed by jolly junior students — regular guys just like you and me!

This one, from the same diocese, is even worse — especially for the wild west liturgical life it gives us a sneak peak of. It would be hard to imagine most serious young Catholic men finding this appealing.

Another awful vocation video would be this one from the Legionaries of Christ. But in reality, the entire genre is choked with examples of this kind.

Why don’t we contrast the Archdiocese of Washington with the SSPX’s vocational video? It’s enough to watch a minute to see that this is going to be very different.

Now, I will be the first to admit that the script could have been more interesting. It follows the somewhat hackneyed “day in the life of…” model. Nevertheless, what do we find here? The soundtrack is Renaissance polyphony. The narrator tells us about the symbolism of a liturgical vestment and shows the seminarians filing in for the office of Prime (believed by some beatniks to have been abolished — don’t break it to them that it survived the purge!). Beautiful images of the Holy Sacrifice of the Mass are followed by a panning shot that features the Angelic Doctor, who is repeatedly referred to. Cassocked teachers lead seminarians in prayer on their knees before class begins. Athletics make a required but thankfully brief appearance. A man is shown repairing a chasuble, which I consider very forward-thinking. All in all, the SSPX video is far closer to the Eastern Orthodox one, and would be similarly appealing to a man in search of a great cause to which to dedicate his life.

All this fits in well with the oft-observed phenomenon that the prospect of challenge or difficulty is what attracts intrepid spirits to make huge commitments. The U.S. Marines have capitalized on this strategy for years. They seek to attract not just warm bodies but talented candidates looking for the best, prepared to endure hardship to win glory. In other words, an elite. In fact, the strategy is as old as Our Lord, who says “take this teaching — if you can” (cf. Mt 19:12), and St. Paul, who compares Christians to olympians in training (cf. 1 Cor 9:24–27). Why, then, are we so afraid of this idea of an elite?

The apostles are often presented nowadays as a ragtag and bobtail crew, but let us consider for a moment how false this picture is. Several were strong and dedicated fishermen who knew how to labor day and night. They were not lily-livered wimps. Another was a Jewish zealot, the desperate sort who would have been ready to ambush Roman soldiers and strangle them. Another was a tax collector, which meant someone who could dominate and intimidate people, and keep a close eye on money in and money out. Two were nicknamed “sons of thunder,” presumably because of their temperaments. 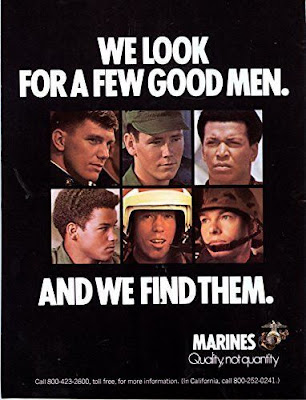 The psychology at work — if you want to recruit good men, set them a towering challenge and then push them hard in its pursuit — seems obviously true in the realm of the military, athletics, and extreme outdoor activities; but it proves no less true in the realm of priestly and religious vocations. If a young man or a young woman is going to commit his or her entire life to the Lord, should it not look and feel quite serious, all-encompassing, demanding everything, but also promising everything? It will take all your mind, heart, soul, and strength, every waking minute, your voice, your lips, your senses, your imagination, your memory — “take it all, O Lord, I give it all to Thee,” as St. Ignatius prayed — but it promises to give you deification, eternal life, a hundredfold now and forever.

For this admirable exchange to be believable — that is, to be able to believe that the Church believes in the reality of this exchange — the way of life it entails must be radical and all-consuming; from the vantage of fallen human nature, it will be burdensome. But this is a necessary step along the path to that “freedom of the children of God” for which we long.

The traditional Latin liturgy is this way, too: it demands more and delivers more. It requires a fuller participation of the whole man, soul and body. We are given more to do spiritually and physically. It makes nothing easy for us — except praying, the one thing we need to do most of all. All of the difficulty is for the sake of breaking open our minds and hearts for communion with God, which will not be won cheaply, lest it be held cheap.

There are a lot of people out there in media, public relations, and, dare I say it, the Church hierarchy, who need to figure out this lesson. The Synod could use a serious injection of the same realism and nobility. (It won’t help, since the whole thing has been rigged from the start, but it never hurts to say what the Synod might have been, had it been run by sane people in touch with youth.)

The most obvious way we can recover the toughness, challenge, and lofty purpose we have lost is to take up again the old breviary and the old Mass, and move on from there to a future full of promise.