Since implementing a financial plan intended to boost the country’s fertility rate, Poland has seen a small rise in births….

In 2015, Poland’s conservative Law and Justice Party proposed a plan called “500+ Families,” which would give Polish families 500 zlotys, or about $150, per month for every child they have after their first. For a family with three children, that’s about $300 per month in untaxed cash income, or about $3,600 a year—nearly double the amount of the U.S.’s new expanded child tax credit. Poland also has a child tax credit on top of this benefit. For single parents, or for children with disabilities, the benefit may be larger, and in some cases may be claimed for the first child as well.

The purposes of the program are straightforward: to combat child poverty, and to boost Poland’s birth rate. Poland’s age-adjusted birthrate is among the lowest in Europe, a trait it shares with much of Catholic and Orthodox Europe, whereas Protestant-majority countries continue to have birthrates near demographic replacement. 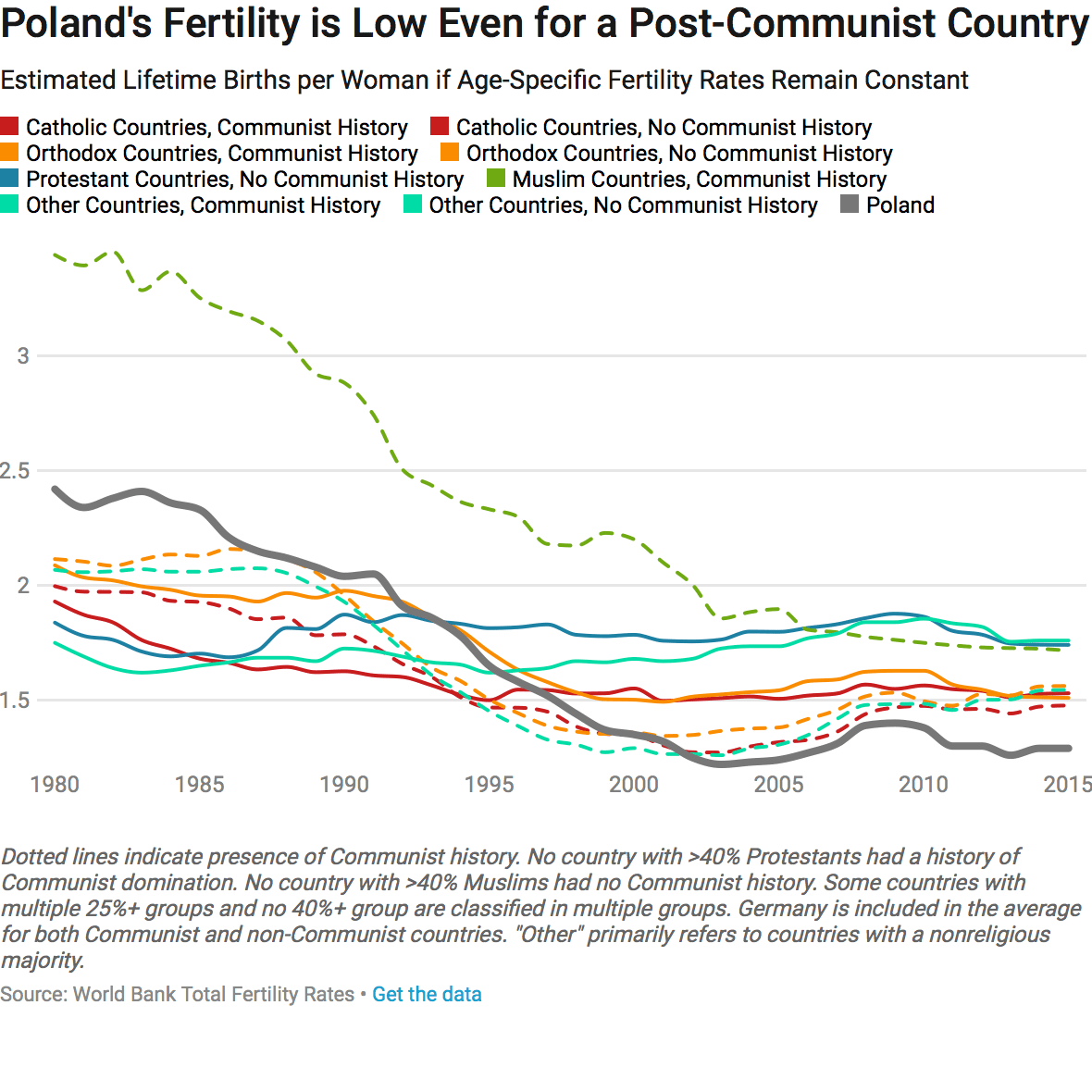 So, did the program work? The government thinks so. The total number of Polish births has risen appreciably in recent years. Poland provides daily birth totals through 2016, and an annual total for 2017, which can be applied to historic seasonal variation to make an estimate of monthly births in 2017. 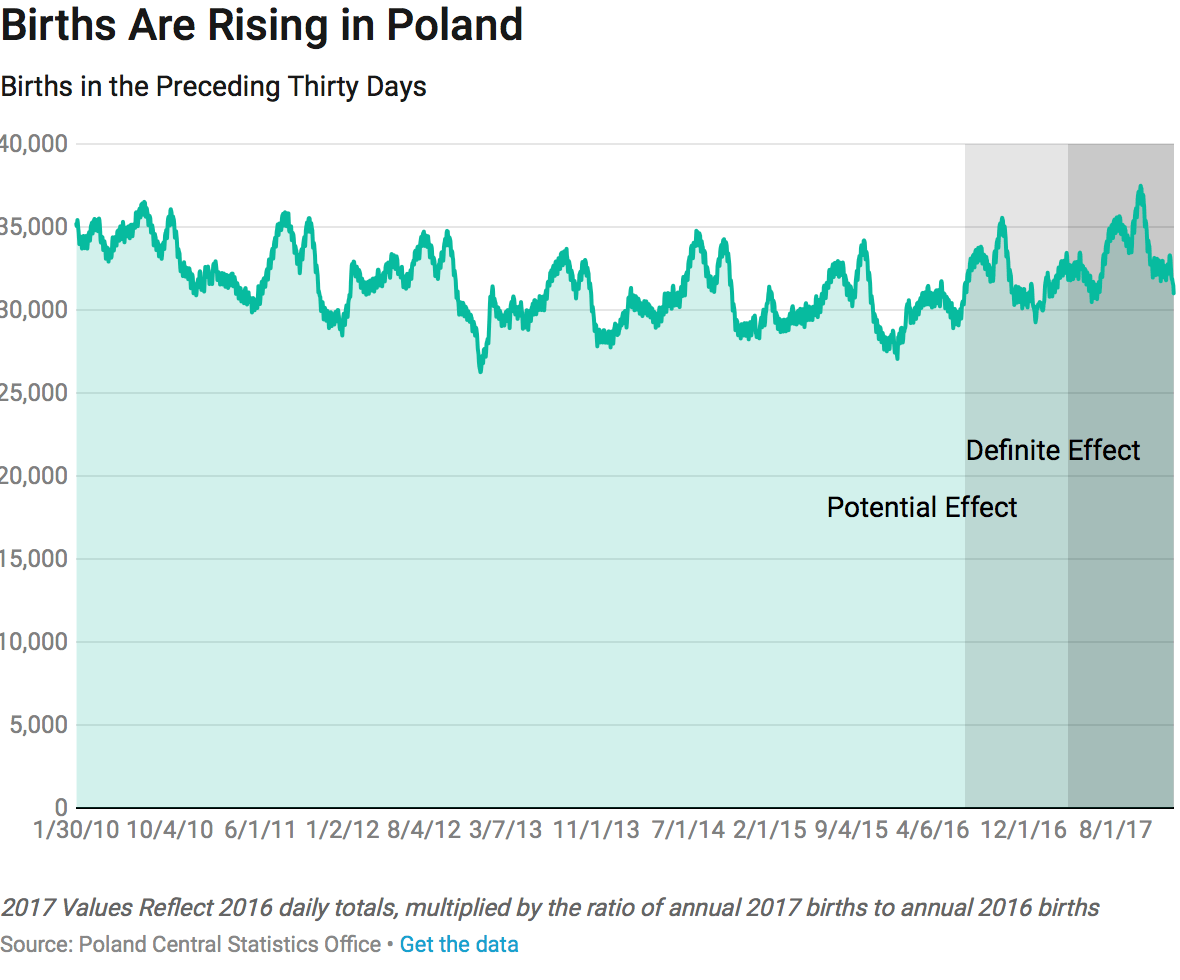 Moreover, there is a deficiency in these data: They reflect all births. The 500+ plan is not for all births—it is for second or higher parity children. So we should expect to see a disproportionate rise in those births. 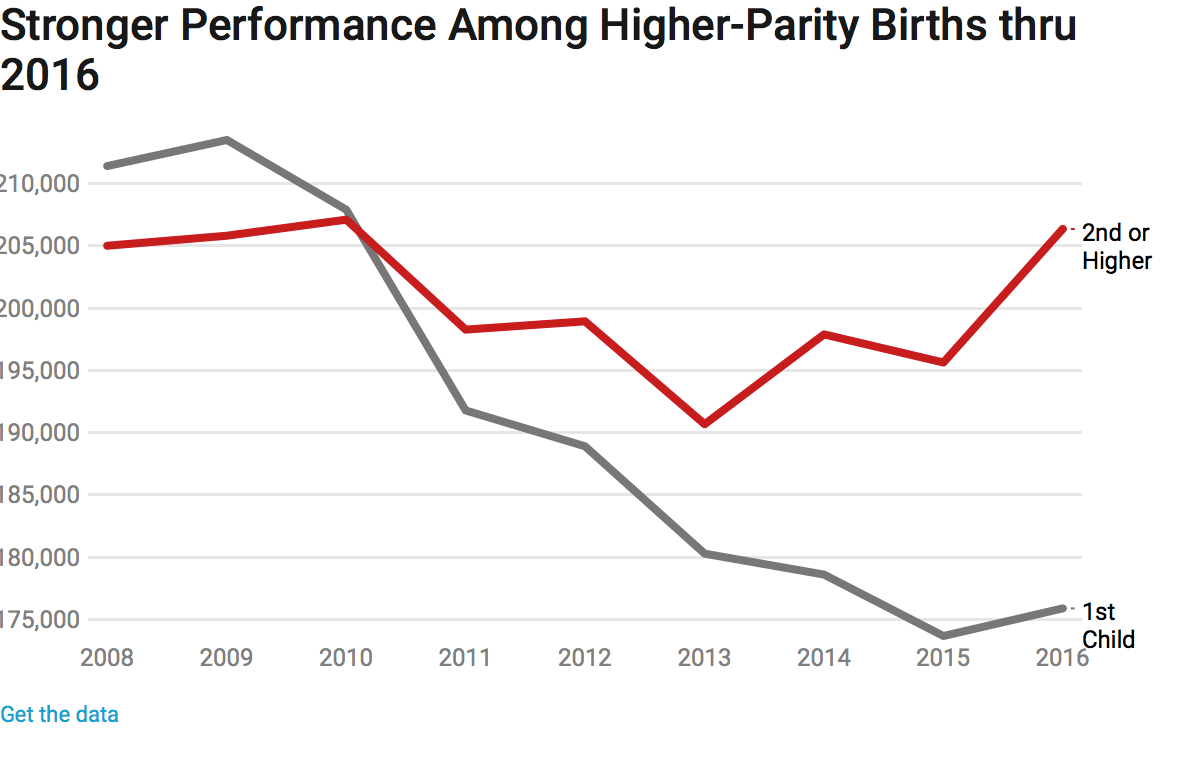 Second or higher parity births rose sharply in 2016 and are now above their 2008 levels. But that increase began in 2014, and by 2016 first births had turned around, too. So it’s not quite clear that this parity jump is due to the 500+ program. For an instance of a parity-specific birth incentive that undoubtedly worked, we might look to the promise of Georgia’s popular patriarch to personally baptize latter-born children.

That said, Poland is experiencing a discernible change in its fertility trends. Age-specific birth rates are available for 2016 and can be approximated for 2017, giving us an age-controlled birth rate. This total fertility rate estimates how many children a woman who is fifteen today can expect to have over the course of her life if age-specific birth rates remain constant. 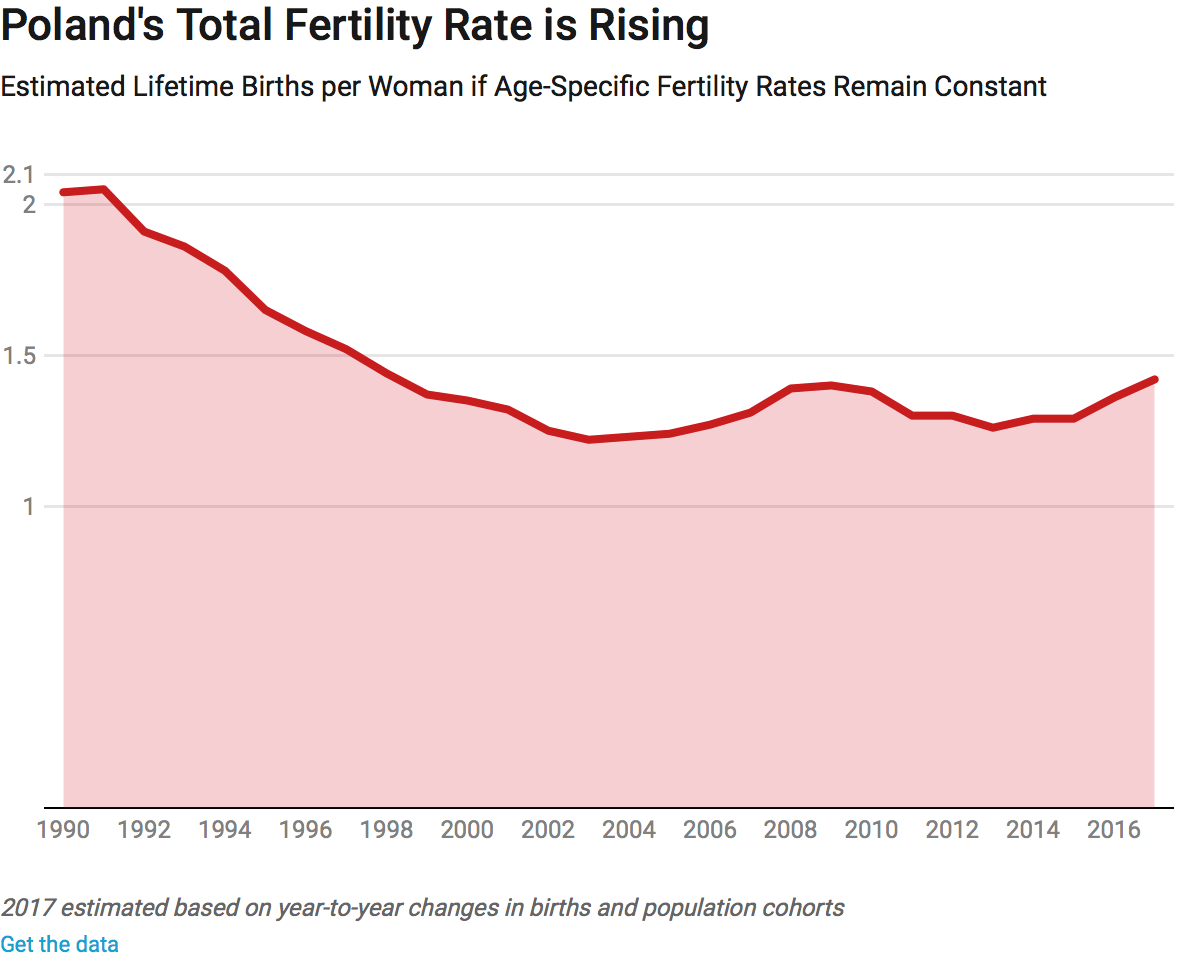 But notice the scale. Poland’s TFR has risen from about 1.29 children per woman to about 1.42. That’s still far below replacement rate, which is about 2.1 children per woman. It’s not a baby boom; it’s a baby bump.

And it’s an expensive bump. The 500+ program pays out about $1,800 per eligible child. The average Polish worker has net earnings of only about $26,000, according to the OECD, and women’s wages are slightly below that. In other words, the benefit is equal to about 7 percent of what a worker could expect to make from working. But labor income is taxed, whereas the 500+ benefit is not, which brings the benefit to something like 9 or 10 percent of what a worker would get from the marketplace. That is, of course, in addition to other child benefits Poland provides.

In the U.S., again according to the OECD, the average annual wage is about $60,000. To get a similar benefit for Americans, we’d need to provide at least $4,200 a year in untaxed payments per higher-parity child, or something like $5,400 in taxable payments.

Based on 2016 American Community Survey data, it seems likely that about 35 to 50 percent of America’s minors living with family are second or higher parity kids. That makes 27 to 40 million kids in America who would be eligible for an American 500+ program. Such a program, then, would cost between $100 and $185 billion per year. Poland’s program costs about $6 billion a year, or 1.3 percent of the country’s GDP.

This would be an enormous expenditure, which might raise the U.S. fertility rate from today’s 1.76 births per woman to (assuming a Poland-sized effect) about 1.9. That’s a gain, but it’s not a game-changer. We would still be well below replacement.

At the end of the day, supporting families financially is a good thing, even if it’s to no other purpose than preventing the intergenerational transmission of poverty. But the solution to low fertility is not some silver-bullet policy that will create millions of new births. A mixture of financial support and leave time would be helpful, as would reforms to key gatekeepers of the economic life cycle (such as universities) and shifts in cultural attitudes about family, community, and childcare. The path to more kids runs through Washington, but also through our homes, our churches, and our communities, and through other countries. Several European countries, such as Germany and Sweden, are staving off severe fertility declines by accepting immigrants, a path Poland has eschewed. Time will tell whether Poland’s expensive bet on tight border control and moderately higher native birth rates will prove wise.

Lyman Stone is an economist who researches demography and migration, and an advisor at Demographic Intelligence.