I won’t try to fathom his motives, but Pope Francis has just betrayed the underground Catholic Church in China. He has made a deal with the collaborationist, Communist-led front group instead. As the Catholic Herald (U.K.) reports:

A Vatican delegation asked Bishop Peter Zhuang of Shantou and Bishop Jospeh Guo Xijin of Mindong to retire or accept demotion in order to smooth relations with the Chinese government.

Asia News, the outlet of the Pontifical Institute for Foreign Missions, reports that 88-year-old Bishop Zhuang received a letter dated 26 October asking him to resign to make way for the government-backed Bishop Huang Bingzhang.

Bishop Huang was excommunicated in 2011 after being consecrated without Vatican approval. He is also a member of the National People’s Congress, the Chinese parliament. …

An underground priest in Mindong said Catholics would feel conflicted over the move. “We of course feel hard to accept but do we have the right to oppose the Vatican?” He said that he may leave the priesthood over the Vatican’s decision.

How many millions of underground Catholics will see this betrayal for what it is? How much credibility will the Catholics of China have now, when they operate as a wing of a totalitarian government? When the people of China look for ways to escape the suffocating embrace of crony bandit socialism, where will they turn?

As I wrote on Twitter when I read this news:

So, if a Chinese evangelical who resists the gendercidal Communist government asked me why he should join a Catholic church that now works with them I tell him … what, exactly?

None of my fellow Catholics could think of a decent answer. Nor can I.

The Gospel in China

China fell to the xenophobic, genocidal tyranny of Mao Zedong in 1949. As part of purging the country of foreign influences and rivals for power, Mao banned all Christian missionaries. Back in high school I met Father Raymond de Jaeger, an aged Jesuit who’d evangelized in China — and spent many months in a concentration camp. (Read his powerful memoir, The Enemy Within.) He told grueling stories of the viciousness armed atheists aimed at harmless preachers, who’d done nothing worse than open schools and feed the poor.

Catholic missionaries arrived in China back in the 17th century, while Protestants came in great numbers two centuries later. In college I learned about Yale in China, a program begun at the turn of the 20th century. Members of some of the wealthiest families in America gave up everything to preach the Gospel in China. Some formed families there, and birthed several generations of energetic Christian evangelists.

But that was before Mao imposed his vicious regime. Beyond hunting missionaries, he demanded that all native Christians form up in groups controlled by the Communist Party. They could have no foreign connections. For Catholics that meant either prison or death, or cutting themselves off from the Vatican. Those willing to make a deal with the Communists formed their own separatist church, its bishops and preachers picked by the Chinese Communist Party. That’s the same party that imposed mass famines upon the people, then in the 1980s demanded forced abortions by the millions. 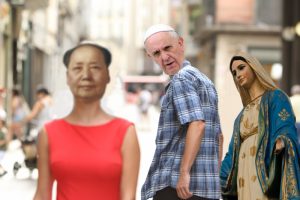 The Collaborators and the Resistance

No big surprise, but the only Catholics with any credibility in China are those who wouldn’t play ball. The “underground church” consisted of priests and bishops who kept secret ties to Rome. Thousands were sent to prison, or tortured, or killed. Likewise, millions of faithful Protestant Christians still meet in illegal churches all across China. Their refusal to collaborate with that corrupt, evil regime is a blazing witness of faithfulness. Growth in China’s churches is impressive, and almost of all of it takes place among those who resist the government.

The Future of Faith in China

In the 1970s and 80s, the people of Poland ignored the priests who’d cut deals with their Communist tormentors. Instead they sought out those who’d gone to prison. Who’d faced down the despots, whatever the cost. They rallied to the faithful priests and bishops on the model of St. John Paul II.

Likewise, if the Gospel ever captures the whole of China — and I think it will — the people will shun the Party-approved operatives of the sold-out Catholic church. They will look to the underground faithful: remnant Catholics and Evangelicals who shun such deals with the devil. And then they will rise up and bring one of the world’s great civilizations to Jesus.

UPDATE: According to the Catholic Herald:

Cardinal Joseph Zen, China’s most senior cleric, has made an eleventh-hour appeal to the Vatican to call off its agreement with China….

[I]n an interview with the Wall Street Journal, Cardinal Zen calls the plan “unacceptable” and a “surrender”….

Cardinal Zen also tells the faithful that, if the underground Church in their area is replaced by the CCPA, they should just pray at home. He warns them against the temptation to schism, saying that even if the Pope signs the deal they should not rebel against him.