A Conversation With Cardinal Burke

Faith and the Sacraments: Spiritual Weapons “Prayer is the most powerful weapon God gave to us,” said Walker. “We’re only 100 feet from the House floor. But throughout our history and biblical history, when we’ve worked through the name of Jesus Christ, it didn’t start over there — it started with God’s people and in his church.”

Focus on Unity in DiversityThe diversity of generations and ethnicities at this national observance was noticeably greater than in past years.

The annual theme of Unity became evident beyond event branding. A written national prayer for America repeated by all at the event’s end acknowledged sins of racism in which Christians have engaged.

“Oh Lord, because each of us is created in Your image, please give us the courage to stand against all racial and ethnic division,” stated the prayer authored by Floyd. “We denounce it as evil and sinful, coming together in unity with all persons knowing this is God’s will for us.”

“Once we get up off of our knees, the next thing to ask is, Lord, what would you have me do?” — Priscilla Shirer

In an interview, Shirer expanded on why believers must make racial healing and justice a priority. “It’s not okay to sit back and think someone else will take on the task,” said Shirer, author of Fervent and other popular books.

“Once we get up off of our knees, the next thing to ask is, Lord, what would you have me do?” she continued. “Is there anything I can do practically and say publicly that will help forward this cause and help bring equal treatment and reconciliation? The silence, apathy and indifference of many white evangelicals are real concerns.”

Another prayer leader, Rev. Samuel Rodriguez, addressed a common criticism of this movement. Over the past year, elected officials who offer “thoughts and prayers” to victims following tragic events have faced spiteful responses online.

“We cannot be defined by cynical criticism,” said Rodriguez in an interview. “When there is pushback on the idea of thoughts and prayers, don’t drink that Kool-Aid. We as Christians know that prayer changes everything. Sure, it’s prayer and action — but it begins with prayer.”

“Let’s multiply and amplify our commitment to prayer.”

Students Come to Learn History — and Shape It 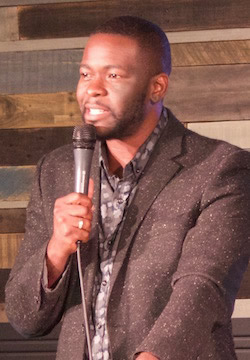 Educators Corry and Lakisha Robinson traveled to the prayer event with a group of 23 high school students from Victory Christian Academy in Orlando, Florida.

“The main reason we brought them here is the National Day of Prayer,” said Corry Robinson. “To be in this room with the spiritual leadership of our nation, praying for a Great Awakening, has really marked our students in a powerful way.”

He noted that Senator Marco Rubio’s office from their home state provided their group a Capitol tour. They also visited sites to mark the Frederick Douglass Bicentennial celebration this year.

“We desire to merge what they’re taught in the classroom with what’s actually happening in the governmental seat of our nation,” continued Robinson. “We strive to instill a biblical foundation and a well-rounded perspective of the history of the nation in every one of our students.”

The group of primarily African American students stood out among the mostly white, silver-haired audience in Statuary Hall. Matt Lockett, director of the Justice House of Prayer in Washington, D.C. and friend of Robinson, acknowledged that problems exist.

“It’s easy to see a lack of diversity here, but it’s changing,” said Lockett, noting private conversations he’s had with other ministry leaders. “Followers of Jesus are the greatest diversity movement in the world. In prayer together, we lay down our agendas and can truly find each other in the presence of the Lord.”

Concerns on the lack of diversity were also reflected in public prayers.

How Scripture Addresses Racism and Unity 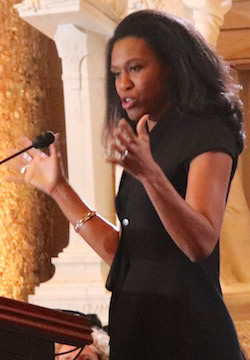 Priscilla Shirer hinted at the ongoing conversation on issues of ethnicity among Christian leaders. Some deny discrimination persists in the present-day, while others view reconciliation efforts as a priority.

“The reason why the issue of unity should be a matter of urgent, heartfelt and fervent prayer — not just today, y’all, but every single day — is because we have an enemy who is working overtime,” said Shirer. “He is sending flaming missiles into our families. We can smell the smoke. We can see the soot — denominationally, culturally, and, yes, racially.”

The Robinsons have often discussed these issues with their students. He points to how the church should reflect “every nation, kindred, tongue and tribe” according to Scripture.

“Unity is vital,” says Robinson. “One thing I have learned to embrace is that unity is not necessarily unison, but it’s harmony. Different parts of the body — different ethnic backgrounds and persuasions — are essential for a sound of harmony through the church to be lifted up all over the world.”

In her remarks, Shirer echoed this message. “Unity is not sameness,” she said. “Our brothers and sisters are young and old; Baptist, Methodist, Presbyterian, Pentecostal; black and white, and everything in between. We share unity of purpose and resolution.”

“Christ Himself brought peace to us,” she concluded.

“Right where you are tonight, pray for the situation in North Korea,” Pastor Ronnie Floyd urged.

The national observance capped off a week of National Day of Prayer (NDP) activities in the capital region, including events at Museum of the Bible and National Community Church. Nationwide, more than 40,000 prayer gatherings occurred.

On Wednesday, Anne Graham Lotz noted her gratitude to Ronnie Floyd for accepting leadership of the prayer ministry. “I am really grateful that Ronnie stepped in and took it on starting this year,” she said. “This entire spring, I thought: Thank goodness I’m not having to worry about all the logistics. I can just see something of the fruit and be a part.”

In addition to the Springdale, Arkansas megachurch he leads, Floyd gives oversight to the NDP ministry staff in Colorado Springs, Colorado. His prayers at the event referenced pressing global concerns, bringing a broader focus than previous years.

“Right where you are tonight, pray for the situation in North Korea,” he urged. “We need a miracle. Ask God somehow, someway through his power that something new would be done in our generation. [Pray] that human life would begin to be respected in North Korea as never before.”

When the leaders of North and South Korea met on April 27, many observers worldwide were encouraged. Others have stressedthat the human rights record of North Korea will not be easily reversed. Today, North Korean people face chronic food shortages, prison camps and a lack of basic freedoms.

Floyd also noted the Mideast region, specifically the 70th anniversary of modern Israel to be celebrated May 14. “Let’s ask God for the peace of Jerusalem, according to the Scripture,” he said.

Billy Graham and the Hidden Work of Prayer 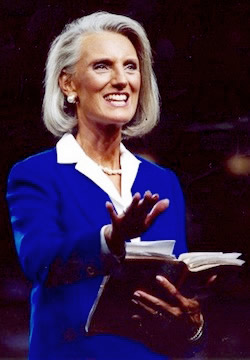 Months after the passing of evangelist Billy Graham, Christian leaders still keenly felt the loss. A video montage of Graham sharing the gospel played near the end of the national observance. Floyd welcomed those watching to repeat the “sinner’s prayer” Graham popularized at his stadium events.

The night before, Graham’s daughter paid tribute to his character. “Daddy didn’t want to be a celebrity or make a name for himself — those things we sometimes see Christian leaders vying for today,” said Anne Graham Lotz. “He was a genuine man who walked with God and whose heart was broken to reach people with the gospel.”

Having preceded Floyd in his role, Lotz noted this national event happens due to an army of sacrificial volunteers. She recounted phone calls where a “thousand people were praying together.”

“Being the NDP chairperson opened my eyes and spirit to a movement of God in this nation I had not been aware of,” she said. “So often we see the apathy in the church and anger in the streets. This opened my eyes to an undercurrent of God’s Spirit that is moving.”

Leading a small group of young adults in weekly meetings on Capitol Hill, Lockett also recognizes the prayer movement is often hidden. He says he is hopeful for future generations coming up, though aware of the challenges.

“The firepower in this room is substantial, but they would all admit that they have not had the greatest success in reproducing themselves,” notes Lockett. “Why not pray with young people instead of just praying for them? It’s key to get our feet wet and get involved in their lives.”

“Personally, I am hopeful,” he says. “And the Scriptures say that hope doesn’t disappoint.”

Watch the entire 2018 national observance of the National Day of Prayer and join in prayer: