Immigrant Children? What About American Children? Most editors would have let it go. The young writer had described a law “allowing abortion up to 12 weeks.” She believed strongly in the right to life, but she was writing with journalistic efficiency, and her editors evaluated her work by a readability score. She used the phrase most journalists would have used.

Short, quick, covered the subject. Except that it didn’t.

The wording erases the unborn. As generally used, it points the reader to the act, not to the subject—the victim—of the act. When people write like this, the baby rarely makes an appearance anywhere in the article.

The reader needs to supply his own picture of the unborn child, and he well might not. We can easily not see, unless the picture is pushed in front of our face. It’s as if we’re shown a slideshow with one picture blurred out. We rarely make the effort to figure out what that blurry thing is.

An “abortion” spoken of in this way might as well be a hangnail removal or a ligament repair or some other morally insignificant operation. At worst, it’s like a face lift, an elective surgery some might consider immoral or unwise, which others insist is a matter of personal liberty. What it won’t be in that way of writing about it—at least not clearly so—is the taking of an innocent human life.

“Allowing abortion up to 12 weeks.” The passive gives it away. You have an abortion, you don’t abort a child. You provide abortions, you don’t abort children. It’s not as bad as the grossly obvious euphemism “terminate the pregnancy.” But it’s still not concrete and specific as it should be. It doesn’t make you see the baby.

For what it’s worth, I don’t think most pro-choice writers intend to erase the unborn by speaking this way. They speak this way because they’ve already erased the unborn child from their minds. They favor abortion because they can no longer think clearly about what the word means. (I’ll insert here the required reference to George Orwell’s great essay “Politics and the English Language.” See especially the paragraph beginning “In our time, political speech and writing are largely the defense of the indefensible.”)

Always Speak of the Child

I changed the young writer’s wording to “allowing the abortion of a child up to 12 weeks of age.” Not nearly as efficient, but much more accurate. 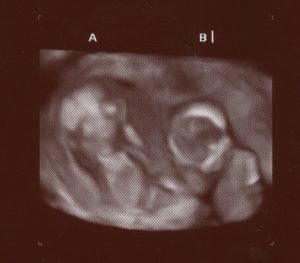 We must always make the reader see the child, I told her. I gave her a parallel example, taken from my experience as a writer and as a close reader of journalism. If the article addressed an age restriction on the death penalty, the journalist would almost certainly make the humanity of the subject very clear.

He’d probably begin with a story of a young man convicted of murder at a certain age and either sentenced to death in spite of his age or saved from being sentenced to death because of his age. If the writer favored the death penalty, he’d probably begin with the story of a killer’s victim and her family’s suffering. In either case, when readers got to “up to 21,” they’d see a person to whom that limit could apply. They might wish him spared or wish him executed, but they’d see him.

The writer would ground the report in the reality of the human life at risk or the human lives lost. He would make his readers see the one acted upon, not just the act.

We must do the same thing when we write about abortion. If my young writer were writing a feature, she could have started it with a story. But she was writing straight news. So she had to find another way to make clear, overt, obvious, and inescapable the humanity of the creature whose death is being considered.

Whenever you speak about abortion, speak in a way that your reader or listener sees a picture of the unborn child. Never speak of the act without speaking of its subject.

One more thing. Some common ways of speaking erase other marginalized and vulnerable people besides the unborn. The dominant media and the voices it amplifies treat so many subjects as purely political that each side advances by trying to make its supporters forget that they are dealing with actual human beings.

We need to remember this when we speak in any ideologically-charged conversation. Speak in a way more likely to make your listeners see a human being. Don’t speak of “homosexuals” or “gays,” which can be dismissive, but of “homosexual people” or “homosexual men and women.” Talk of “black people” and “white people,” not “blacks” and “whites,” and of the poor as human beings, not as members of a generic class like “welfare recipients.” Speak with compassion for the people who want to enter this country to find a safer, better life for their children. Always humanize.

The writer commends Rehumanize International’s Bad Words Project https://www.rehumanizeintl.org/badwords and the important book upon which it’s based, William Brennan’s Dehumanizing the Vulnerable https://www.amazon.com/Dehumanizing-Vulnerable-When-Games-Lives/dp/0919225195.