This astronomy blog was written by AccuWeather Meteorologist Brian Lada.

(On August 21st), millions of Americans will witness day turn to night as the moon blocks out the light from the sun, but there is more to the celestial spectacle than many think.

While all attention will be on the sun and the moon, many people’s surroundings will change during the brief moments of totality.

Subtle differences may be noticed in areas that only experience a partial solar eclipse, but much bigger changes will take place along the narrow path from Oregon to South Carolina that see a total eclipse of the sun.

While everyone’s attention will be focused on the sky, looking down can reveal another scene that not many have experienced.

Spectators that look at the horizon during totality will witness the colors of sunrise and sunset around them in every direction.

This 360-degree sunset effect is caused by the light from the sun in areas outside of the path of totality and only lasts as long as the face of the sun is covered by the moon.

As the moon causes day to turn to night, the darkness will reveal the stars in the sky as well as a few planets.

People shouldn’t waste too much time looking for planets and constellations since many of these can be seen at night during different parts of the year. However, the eclipse will make it easy to spot Mercury, a planet that can be tricky to spot due to its close proximity to the sun. 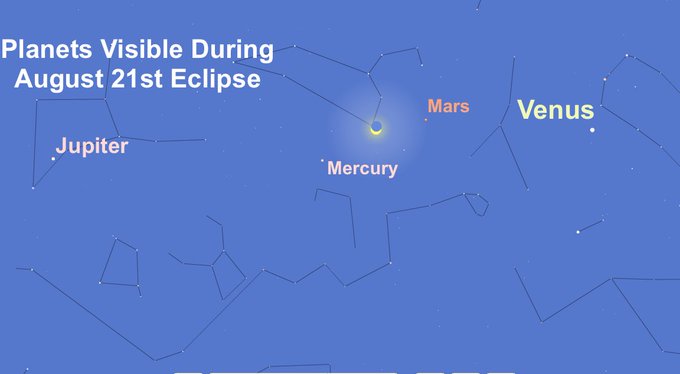 If you are in the path of the Aug. 21st eclipse, you will see planets during totality! The gem is Mercury, which is bright, but rarely seen!

The celestial alignment will also reveal the sun’s corona, the area of hot gas the surrounds the sun.

A few lucky spectators may even be fortunate enough to see a meteor streak across the sky during the brief period of darkness.

Those watching the total solar eclipse from a city, parking lot or street corner may still see some light during the brief period of totality.

This light will not be from the sun, but rather streetlights that automatically turn on when it gets dark outside.

These automatic lights will not ruin the eclipse, but it may make it more difficult to spot planets and stars in the sky during totality.

Not only will an eclipse cause the environment to appear different, but also feel different.

“When sunlight fades at twilight, we always notice how things start to cool down. The same is true for the temporary dimming during a total solar eclipse,” NASA said.

Depending on factors such as the time of year, cloud cover and the length of totality, the air temperature can drop more than 20 degrees F.

During a solar eclipse in 1834, the air temperature in Gettysburg, Pennsylvania reportedly dropped by 28 degrees F.

A graph showing the change in temperature during a solar eclipse in 2001. (Credit/Dr. Mitzi Adams NASA/MSFC)

One of the rare phenomenon to look for during the total solar eclipse is something called shadow bands or shadow snakes.

“Shadow bands are thin, wavy lines of alternating light and dark that can be seen moving and undulating in parallel on plain-colored surfaces immediately before and after a total solar eclipse,” NASA said.

Some people also call these shadow snakes since their wavy motion can look like snakes slithering on the ground.

Scientists still do not fully understand what causes shadow bands, but they only occur during the seconds leading up to and the seconds immediately following totality.

This phenomenon does not happen during every eclipse, so it’s not a guarantee to see them.

When shadow bands do occur, they can be difficult to spot since they are often dim, so people trying to view them should set up a large white poster board, piece of plastic or bed sheet at their viewing site.