How Gregorian Chant Converted a Baptist to Catholicism What is the very first prophesy in human history? What or who is it about? As you might imagine, it’s probably be pretty important. This single verse, Genesis 3:15, is called the “Proto-evangelium,” which means “First Gospel.” This one verse is the first mention of the Gospel in Scripture, and it occurs right after the Fall of Adam and Eve. Not only that, it’s an encapsulation — the “seed” — of the entire Gospel. There is a summary of the Gospel hidden right here in this short verse. This means that God knew His plan to redeem all mankind from the very beginning, and said so.

Not only does Gen 3:15 contain prophesies of Christ, it also provides three distinct prophesies of the Blessed Virgin Mary that every Catholic should know.

Take a second to think about that. This was written thousands of years before Mary’s birth. How inexpressibly amazing is it that this verse would contain prophesies of her life? Also, how amazing is that that God would hinge all history on the life of a Nazarene peasant girl and her willingness to say yes? What a miracle! As Mary did, just ponder that in the silence of your heart.

Where does this verse appear in Scripture? This verse immediately follows the fall of Adam and Eve after their temptation by the serpent. God addresses each one in turn — the serpent, Eve, and Adam (as well as the New Eve and the New Adam). Gen 3:15 is actually part of God’s address to the serpent.

There is quite a lot happening in these four lines. Let’s break it down, piece by piece, prophesy by prophesy:

WHO’S WHO IN THIS PASSAGE?

To explain Who’s Who, I’ve made the following infographic: 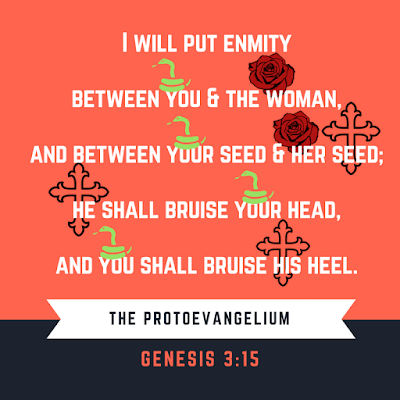 Or, if plain text is clearer to you, I’ve inserted names into the verse below and alongside the pronouns:

I [God] will put enmity between you [the serpent] and the woman [Mary], and between your [the serpent’s] seed and her [Mary’s] seed;he [Jesus] shall bruise your [the serpent’s] head,and you [the serpent] shall bruise his [Jesus’] heel.God is speaking to Eve, Adam, and the serpent, but “the woman” is not Eve. It is Mary. Trust me on this for now, this part will be explained more fully below in the “Immaculate Conception” section. For now, notice that God says He “will put emnity”, so “the woman” will be a future woman, not Eve. Remember, also, that Jesus refers to his mother as “woman” in the New Testament, specifically at the Wedding in Cana.

Who is the serpent? Your gut probably tells you that the serpent is none other than Satan, himself. This is correct. Nevertheless, Scripture confirms this interpretation. Revelation 12 depicts a scene between a “woman” and the “dragon”, and refers to the dragon as “that ancient serpent” (Rev 12:9). And yes, Revelation speaking of the “woman” and the “serpent” together is extremely significant. Revelation 12 is, in many ways, the sister chapter to Genesis 3, the former fulfills the later. 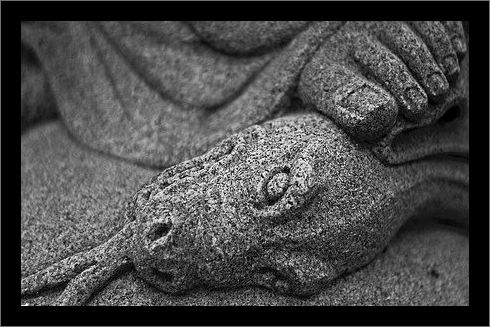 Who is the serpent’s seed? There are multiple interpretations here. The two most common understandings are either (1) the anti-Christ or (2) those who have made covenant with Satan, which could be Cain and his descendants or basically any evil or sinful person. Ultimately, the serpent’s seed are those who stand in opposition to the Messiah.

Where is Mary in all this? There are actually three prophesies of Mary in this short verse:

What about that strange word, “enmity”. Enmity, according to Google, means “the state or feeling of being actively opposed or hostile to someone or something.” We might think of “enmity” as the opposite of “amity” or “amicable”.

God says He “will put emnity between [the serpent] and [the woman].” Clearly, “the woman” cannot be Eve, because she has already succumbed to serpent’s wiles and temptations. She gave into the serpent by eating of the fruit of the Tree of Knowledge. There is no longer enmity or conflict between Eve and the serpent, because, unfortunately, they are allies according to the wages of sin. With her openness to sin, Eve is no longer opposed to Satan.

But! There “will” come “the woman” who will be in conflict with Satan. She will be opposed to Satan from the moment of her conception. She will have been conceived without sin. The Original Sin of Adam and Eve will hold no sway over this woman. This woman is, of course, Immaculate Mary.

Saint Irenaeus states the knot tied by Eve’s disobedience was undone by the New Eve’s, Mary’s, obedience. The “Ave Maria” reverses the sin of “Eva” (“Ave” spelled backwards). Mary’s YES to God that she will bear the Christ child is an act of open hostility to Satan. Mary’s YES is an act of war, i.e. enmity.

Check here for more on the writings of the Church Fathers, like Saint Irenaeus, on the Blessed Mother.

The words “virgin” or “birth” are no where mentioned in the above verse, so how can the Protoevangelium possibly foretell the birth of the Messiah by a virgin? It’s all in just two words: “her seed”, meaning Mary’s seed.

Okay, but how does that mean virgin birth?

Referring to Jesus as his mother’s seed, i.e. “her seed”, means the child will have no biological father. In other words, a “virgin birth.” There was no physical seed of man at Jesus’ conception. Thus, it is foretold that the Messiah would be born of a virgin.

PROPHESY #3: DEFEAT OF SATAN BY THE MESSIAH

The next prophesy is that the son of “the woman”, i.e. Mary’s son, will bruise the head of the seed of “the serpent.” In doing so, however, Mary’s son will also be wounded in the heel.

What does all this mean? Basically, it means that Jesus will defeat Satan, but in doing so, Jesus will die. That’s always the price of the serpent’s bite. This is a prophesy, therefore, of Christ’s passion, death, and ultimate victory.

But it goes even deeper than this. Can you think of the exact moment when Jesus strikes at the serpent’s head or, more specifically, the serpent’s skull?

Ask yourself, where is Jesus crucified? The hill’s name is Golgotha, the place of the SKULL. Jesus’ cross, the site of his victory over Satan, literally strikes a skull. Again, this is why there is typically a skull depicted at the foot [read: heel] of the cross. Another level of cool: there’s a legend that Golgotha was so-named because it waswhere Adam was buried.

This is why Mary and Jesus are often depicted as crushing a serpent under their heels. But why Mary, you might ask. The word for “he” in “he shall bruise [the serpent’s] head” can be translated as either “he” or “she”. St. Jerome in the Vulgate translation of the Bible actually uses the female pronoun instead of “he”. This makes sense. Simeon prophesied of Mary that “a sword will pierce through your own soul also” (Luke 2:35).

Isn’t that amazing? All of these prophesies are contained in just one verse. Not only that, it’s the very first prophesy in human history, found at the beginning of the Bible and written thousands of years before Mary’s conception. Not only is prophecy proof of the power of God, Genesis 3:15 is scriptural proof for the Catholic teaching of the Immaculate Conception. Every Catholic should know about this, right?

Prophesies like this should help fortify the faith of all Catholics. Moreover, the primary modes of credibility of the early Church were miracles and prophesy. That is, the early Christians convinced people of the truth of their faith by performing miracles in Jesus’ name and pointing to the ancient prophesies fulfilled by Christ (and His Mother).

What was true for the early Christians is true for us today. Will you please spread word of this proof of God’s supernatural power in and over history?

Want to learn more about Mary? Enroll in my course:

Please share any comments or questions you have below.

First and foremost, this is about you. How can I help you? I am an author and speaker that helps faithful but overwhelmed Catholics understand the richness of the Faith, so they can light the world on fire, starting with their own friends and families.