The Bible is full of mind-bending, conception-shattering paradoxes. How can the Infinite God be a tiny baby in a manger? How can the All-Powerful God die hanging from a cross? How can God be both perfectly merciful and perfectly just? How can Jesus be both fully God and fully man? These paradoxes might even seem like contradictions because of the way we try to project our humanity onto to God … but God is not so limited.

There is one moment in particular in Scripture that made minds explode. This one scene would have been more shocking even than the King of Kings dying on a cross. To a Jew in the First or Second Century AD, this scene would have been even more surprising than Jesus instructing his disciples to “eat my flesh” and “drink his blood,” in apparent contradiction with God’s Covenant with Noah … and perhaps more surprising than St. Peter deciding that circumcision was no longer required, in apparent contradiction with God’s Covenant with Abraham.

So what is the total mind blow of Scripture? What is the essential paradox? … It starts with the Lion.

THE LION OF JUDAH

The Christian tradition of the lion runs deep. It goes far deeper than the Chronicles of Narnia, in which C. S. Lewis’ depicts the Son of God as the lion, Aslan. One of the most significant, if not the most significant, Messianic image in Jewish history is the lion. The Prophets referred to the Messiah as the “Lion of Judah.” Why?

The “Lion of Judah” originated at Genesis 49:9 with Jacob’s last words to his sons, in particular to his son, Judah:

Judah is a lion’s whelp;
from the prey, my son, you have gone up.
He stooped down, he couched as a lion,
and as a lioness; who dares rouse him up?

Judah is obviously being described as a lion, but something more is going on. The above verse may seem a little mysterious, but in his next words, Jacob makes it clear. Next, he prophesies the coming Messiah,Genesis 49:10-12:

The scepter shall not depart from Judah,
nor the ruler’s staff from between his feet,
until Shiloh comes to whom it belongs;
and to him shall be the obedience of the peoples.
Binding his foal to the vine
and his ass’s colt to the choice vine,
he washes his garments in wine
and his vesture in the blood of grapes;
his eyes shall be red with wine,
and his teeth white with milk.

Jacob makes in clear … sort of. Who or what is “Shiloh”? Shiloh, the Hebrew word for “He Whose It Is”, is commonly understood as a name for the Messiah. “The scepter” and “the ruler’s staff” are all marks of royal authority and kingship, which are to be wielded by the Messiah and the Kings of Israel descended from Judah, namely Kings Saul, David, and Solomon.

Isn’t it interesting, that the Messiah is associated with vines and wine? Not just any wine, but wine which isblood! i.e. the blood of grapes. How Eucharistic!

This might also remind you of a passage from Revelation: “And he said to me, ‘These are they who have come out of the great tribulation; they have washed their robes and made them white in the blood of the Lamb'” (7:14). The Lion of Judah also washes his garments in wine and blood, but his teeth are white with milk. 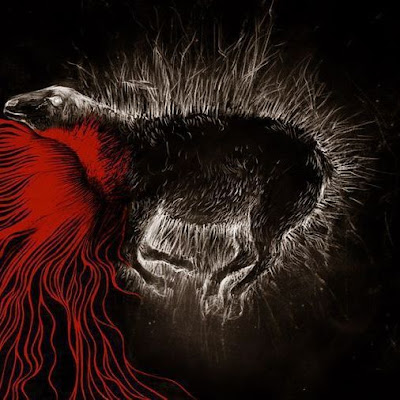 Once the Israelites arrived in the Promised Land, they set up the Tabernacle of Moses one last time, cf. Joshua 18:1. Can you guess where? At Shiloh! The Tabernacle remained there, according to Talmudic sources, for 369 years.(1) The Tabernacle remained at Shiloh until its central edifice, the Ark of the Covenant, was removed and then captured by the Philistines. (Hang on to that last detail: the Ark of the Covenant will come back into this story later on.)

You might be asking yourself … so did the prophesy come true? Was Jesus from the tribe of Judah? Yes! You might remember that the Messiah was also prophesied to be the “Son of David,” such as in 2 Samuel 7:12-16. Since King David was from the tribe of Judah, his “son”, i.e. his descendant, would also be a member of the tribe of Judah. Jesus was descended from David from both sides of his family. According to Matthew 1, Saint Joseph was descended from David; therefore, Christ, too, as his adopted son. Not only that, the second genealogy of Jesus (Luke 3) shows that Saint Mary, too, was a descendant of David. 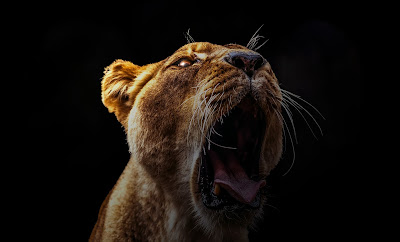 And then, in the very next verse, the most surprising thing happens … the Lion disappears!

(6) And between the throne and the four living creatures and among the elders, I saw a Lamb standing, as though it had been slain, with seven horns and with seven eyes, which are the seven spirits of God sent out into all the earth and he went and took the scroll from the right hand of him who was seated on the throne. (Rev 5:6-7)

Did you catch that? The Lion of Judah is described as a … what? A lamb? The Lion of Judah, the prophesied Messiah that would break the nations with an “iron rod” (cf. Ps. 2:29; Rev 2:27), is just a meek, utterly vulnerable lamb? That has been slain?? 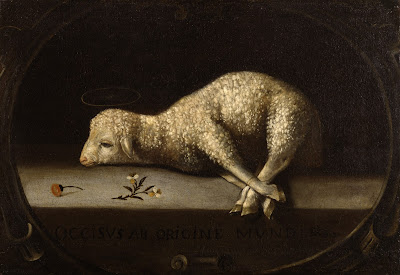 This would be an astonishing scene for a Jew in the First Century. The Jews were hungry for a ruler who would overthrow their Roman overlords. They were bristling under the weight of their pagan rulers. Scattered riots and full-blown revolts were breaking out everywhere. Barabbas, whom the people chose to free instead of Jesus (John 18:40), had been a leader of such a riot. Judas Maccabee led a revolt – the subject of the First and Second Book of Maccabees – and established a Jewish kingdom in Judea that lasted a hundred years (164-63 BC) until Rome took over. This was the world Christ was born into. Also, not long after Jesus’ death, the outbreak of riots rose to such a fever pitch that the Romans besieged Jerusalem and eventually destroyed the Temple in 69-70 AD.

The destruction of the Temple marked the end of the Jewish religion as it had been known up to that point. The Temple was the political and religious center of Jewish society. Without the Temple, there could be no priests and no sacrifices. From this point on, we see the emergence of Rabbinic Judaism, a form of Judaism based on the texts and not the Temple. Let that sink in … the destruction of the Temple ended the Jewish priesthood. The Jewish priesthood survived only in the new priesthood established by Christ.

So, imagine this: Fresh from the catastrophic collapse of their religion, the Jews are presented with theApocalypse According to Saint John – what we call the Book of Revelation. Their hopes for the future are ashes until the Lion of Judah enters the scene, ready to break the seal and to conquer. Then, snap! Just as quickly as the Lion arrives, he disappears and is replaced by a Lamb. 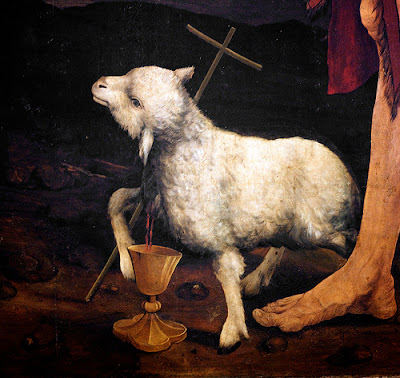 A LAMB STANDING AS THOUGH SLAIN

We find Saint Justin Martyr, the Church Father, trying to make this very same Christological connection to a First Century Jew. He states in his Dialogue with Trypho the foll0wing:(2)

For the lamb, which is roasted, is roasted and dressed up in the form of the cross. For one spit is transfixed right through from the lower parts up to the head, and one across the back, to which are attached the legs of lamb.

Did you catch that? The Passover lambs were “dressed up”, i.e. slaughtered, in “the form of a cross.” That means the lambs were crucified! Here’s more on that from Jewish  scholar Joseph Tabory.

A lamb standing as though it had been slain would be a crucified lamb. Revelation, therefore, is describing Christ Crucified, the conquering Lion of Judah and the slain Lamb of God.

APOLOGETICS NOTE: THIS IS WHY CHRISTIAN CHURCHES SHOULD HAVE CRUCIFIXES, NOT JUST CROSSES

It’s a pretty striking difference. Most Protestant churches display a cross above their altars, if they have one, or in their worship space. Catholics display crucifixes, and rightly so. But why?

Because, according to Revelation 5:6, what is standing beside the Throne of God in the Heavenly Temple? The answer is “a lamb standing as though slain.” So, beside the Throne, there stands the crucified Lamb of God. This is why Jesus stands crucified, i.e. a crucifix, beside the priest’s chair in Catholic churches.

THE SECOND MOST SURPRISING MOMENT IN THE BIBLE

In the Second Book of Maccabees, the Prophet Jeremiah hides the Ark as well as the rest of the Tabernacle in a cave on the slopes of Mount Nebo, the place where Moses first saw the Promised Land. Jeremiah stated that the Ark would remain hidden “until God gathers his people together again and shows his mercy” (2 Maccabees 2:7). Jeremiah adds in the next verse, “And then the Lord will disclose these things, and the glory of the Lord and the cloud will appear.”

So when does this happen? We turn back to the Book of Revelation. After the Judgment of the Nations and the rewarding of the Prophets and the Saints – when God “shows his mercy” – the Ark reappears at Revelation 11:19:

Then God’s temple in heaven was opened, and the ark of his covenant was seen within his temple; and there were flashes of lightning, loud noises, peals of thunder, an earthquake, and heavy hail.

This is the long-awaited return of the long-lost Ark! With the Ark of the Covenant carried before them, the armies of Israel were never defeated. And now with the Lion of Judah to lead them, the Jewish people will not only reclaim their lands, but conquer the entire world.

But SURPRISE! Here’s the very next verse:

And a great portent appeared in heaven, a woman clothed with the sun, with the moon under her feet, and on her head a crown of twelve stars; she was with child and she cried out in her pangs of birth, in anguish for delivery. (Rev 12:1-2)

Just like the Lion of Judah, the Ark of the Covenant disappears and is replaced with a very unexpected sight. If you thought a slain lamb was weak or vulnerable, how about a woman in the throes of childbirth? The Woman gives birth to a child who will rule the nations with a “rod of iron” (Rev 12:5) – this is, again, the Messiah. Again, the Messiah isn’t depicted as the Lion of Judah, but perhaps as the most vulnerable figure of them all: a newborn child (which is about to be devoured by a dragon). 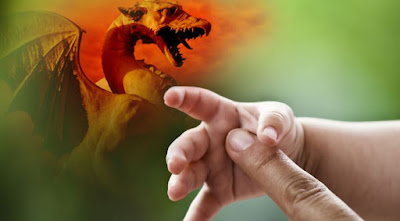 These surprise twists in the Book of Revelation give us the Lamb of God and the Mother of the Lamb. The Woman of Revelation, the Mother of the Messiah, is, of course, the Blessed Mother, who is the New Ark of the Covenant.>>For more on the Virgin Mary as the New Ark of the Covenant, check out this article.>>For more on the connections between the Lion, the Lamb, the Ark, and the Virgin Mary, check out this post on the Woman of Revelation 12.

Thanks for reading! Please share your comments below. Do you see now why these verses from Revelation would have been shocking to a First Century Jew?