An Unexplainable Peace in a Chaotic World What do Angelina Jolie, Mira Sorvino and Gwyneth Paltrow all have in common? They’ve each won an Oscar and each just admitted they too were sexually harassed by Hollywood producing mogul Harvey Weinstein.

“I thought you were my Uncle Harvey,” Paltrow remembers thinking after Weinstein tried massaging her and invited her into his bedroom. She left.

Reading their accounts in The New York Times, Paltrow, Jolie and Sorvino got off lucky. A New Yorker magazine profile out today recounts three women alleging they were raped by Weinstein and four more who were groped. (They join actress Rose McGowan, who had already gone public with her rape allegation against Weinstein.)

The list that seemingly grows by the minute of actresses, models, employees, waitresses harassed and groped and threatened by Weinstein display a pattern of sexual abuse that stretches back decades.

First, the actresses said, Harvey Weinstein lured them to a private place to discuss films, scripts or even Oscar campaigns. Then, the women contend, he variously tried to initiate massages, touched them inappropriately, took off his clothes or offered them explicit work-for-sex deals.

The New Yorker expose goes into further detail, explain how Weinstein would often have a female employee with him at the start of the meeting to help the young woman feel more comfortable. The employee would then leave.

The New Yorker’s Ronan Farrow reported that 16 former and current executives at The Weinstein Company and Miramax admit either witnessing or knowing of Weinstein’s unwanted sexual advances. “All sixteen said the behavior was widely known within both Miramax and the Weinstein Company.”

The complicity gets to the most disturbing question of all, “Who knew and why’d they stay silent so long?”

The answer is “most everybody.” “This has been an open secret to many in Hollywood and beyond,” writes The New Yorker.

The cover-up starts within the film companies he ran, Miramax and the Weinstein Company. As the Times wrote:

He had an elaborate system reliant on the cooperation of others: Assistants often booked the meetings, arranged the hotel rooms and sometimes even delivered the talent, then disappeared, the actresses and employees recounted. They described how some of Mr. Weinstein’s executives and assistants then found them agents and jobs or hushed actresses who were upset.

So widespread was the awareness, it was even joked about at the Academy Awards. Reports the Times, “His alleged behavior became something of a Hollywood open secret: When the comedian Seth McFarlane announced Oscar nominees in 2013, he joked, ‘Congratulations, you five ladies no longer have to pretend to be attracted to Harvey Weinstein.’”

The audience laughed. The same audience of A-Listers that is now tweeting their shock and outrage. “And the Oscar for Best Feigned Surprise goes too … ”

Not everyone knew? Tina Fey knew. Back in 2012, Fey’s sitcom 30 Rock made direct reference. “I’m not afraid of anyone in show business,” Jane Krakowski’s character said. “I turned down intercourse with Harvey Weinstein on no less than three occasions . . . out of five.”

Said Glee creator and TV producer Ryan Murphy, “Whenever he would come up in conversation (with actresses), it would always be the same ‘ick.’ All of the girls, all of the women would say that.” He took it as a “systemic” problem.

Oscar-nominee Jessica Chastain also calls B.S. on those in town who say they didn’t know.

I was warned from the beginning. The stories were everywhere. To deny that is to create an enviornment for it to happen again.

Ashley Judd, herself targeted by Weinstein, told the Times, “Women have been talking about Harvey amongst ourselves for a long time, and it’s simply beyond time to have the conversation publicly.” (Why’d she wait so many years? Imagine the reaction across the Heartland had it got out in 1997 that someone had messed with Naomi Judd’s little girl and Wynonna’s kid sister.)

The Media knew. Ask Sharon Waxman, founder of the industry website The Wrap. She says in 2004, The New York Times torpedoed an article she had written exposing the mogul’s sexual misconduct in Italy. It was enabled by Miramax Italy head Fabrizio Lombardo. “After intense pressure from Weinstein, which included having Matt Damon and Russell Crowe call me directly to vouch for Lombardo and unknown discussions well above my head at the Times, the story was gutted.”

Ask Rebecca Traister at TheCut.com. She recalls an event in New York where Weinstein called her the c-word, and when a colleague intervened, Weinstein pushed him down the steps and dragged him in a headlock onto Sixth Avenue.

Such was the power of Harvey Weinstein in 2000 that despite the dozens of camera flashes that went off on that sidewalk that night, capturing the sight of an enormously famous film executive trying to pound in the head of a young newspaper reporter, I have never once seen a photo. Back then, Harvey could spin — or suppress — anything; there were so many journalists on his payroll, working as consultants on movie projects, or as screenwriters, or for his magazine.

Both Traister and The New Yorker‘s Farrow talk of the various efforts of reporters over the years to get the story out, only to fail. One was Kim Masters of The Hollywood Reporter. She almost reached the “end zone,” but was done in by fear. “At the last minute, the source withdrew.”

The police even knew. The NYPD even has audio of Weinstein admitting he groped a Filipina-Italian model named Ambra Battilana Gutierrez in 2015. Gutierrez had gone to the police after the incident, and she agreed to wear a wire to their next encounter.

Which gets to one of the reasons for the decades of silence.

Why didn’t anybody speak out? Several reasons.

Harvey Weinstein made people rich and famous. He could make or break careers, not only of actresses, but directors, producers, casting directors, executives, assistants. The media had motive as well. As Waxman noted, Weinstein was a major advertiser in The New York Times. As long as he was a chief engineer in Hollywood, no one wanted to derail the money and fame train.

In a piece titled, “I’m a Coward,” Liz Meriwether writes why she stayed silent.

What can I do about it? Who do I tell? I don’t have enough money for a lawyer. I don’t want to suddenly become unemployable because of something he chose to do to me. What if I said something and he stopped me from getting another job? So I made a decision: I chose to stay quiet. I kept working with him. As I said, I’m a coward.

Harvey Weinstein was vicious and fearsome. Weinstein and his team of high-powered lawyers would work tirelessly to crush anyone or anything that threatened to expose him. One rape victim, who had worked with Weinstein, explained to Ronan Farrow her reluctance to come forward. “He drags your name through the mud, and he’ll come after you hard with his legal team.”

Rose McGowan wanted to press charges. However, a lawyer advised against it. She tweeted: “a (female) criminal attorney said because I’d done a sex scene in a film, I would never win against the studio head.” Instead she settled and signed a Non-Disclosure Agreement.

Weinstein was big on NDAs.

Harvey Weinstein is politically connected. Weinstein is a major player in the Democratic Party. Weinstein not only gavehundreds of thousands of dollars to candidates and the DNC, he raised even more for Bill Clinton, Hillary Clinton and Barack Obama. He hosted fund-raisers for Hillary. Michelle Obama feted him. He’d been to the Obama White House 13 times. The Obamas even sent their daughter Malia to intern with him.

After days of silence — or should we say years —Hillary Clinton finally released a statement.

I was shocked and appalled by the revelations about Harvey Weinstein. The behavior described by women coming forward cannot be tolerated. Their courage and the support of others is critical in helping to stop this kind of behavior.

Barack and Michelle Obama followed with a similar vague statement Tuesday evening. They did not comment on the potential danger they put their daughter in.

We leave the last word to Rose McGowan. 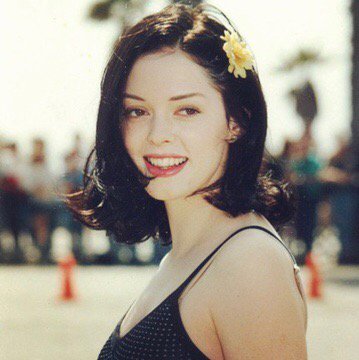 This is the girl that was hurt by a monster. This is who you are shaming with your silence.