THE US staged their own terrifying show of might today by dropping giant bombs near the North Korean border  – days after Kim Jong-un’s latest missile outrage. 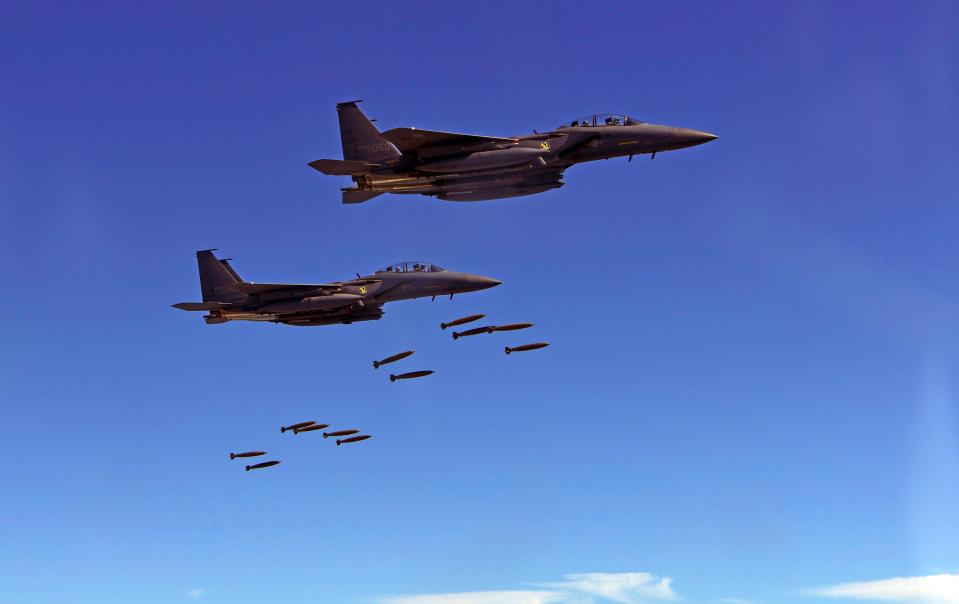 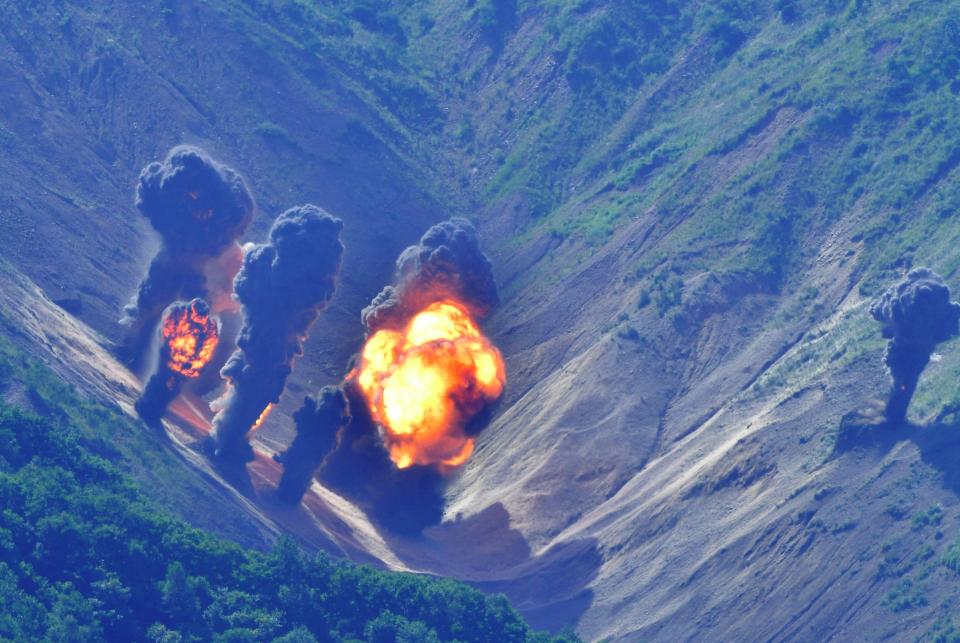 In a statement, the US air force said its bombers flew out of Andersen Air Force Base in Guam and four stealth fighter jets from a US Marine Corps base in Japan.

They conducted a shocking bombing attack, which simulated a surgical strike of key enemy facilities, over the Pilseung Range in the eastern province of Gangwon – which neighbours North Korea.

North Korea has been test-firing missiles at a rapid clip this year. With each launch, experts fear Kim’s military can further refine and perfect its missile technology.

The bomber flights have becomes a common response to North Korean actions but the dropping off bombs is seen as an escalation by the US.

B-1Bs flew over the Korean Peninsula following both of Pyongyang’s recent tests of intercontinental ballistic missiles, the type of weapons designed to deliver nuclear warheads to far-off locations like the mainland United States.

The bombers flew from Guam, the closest US territory to North Korea and the target of North Korean threats in recent weeks.

The mock attack came after President Donald Trump said it was becoming clear words would not resolve the Korean conflict.

The state-run Korean Central News Agency said that the Tuesday its latest missile launch was “a meaningful prelude to containing Guam,” which it then called the “advanced base of invasion” for US forces.

In a follow-up statement, KCNA promised future launches “targeting the Pacific, where the US imperialist aggressor forces’ bases are stationed.”

“It should not be forgotten even a moment that the whole of South Korea can turn into ruins,” the statement added. 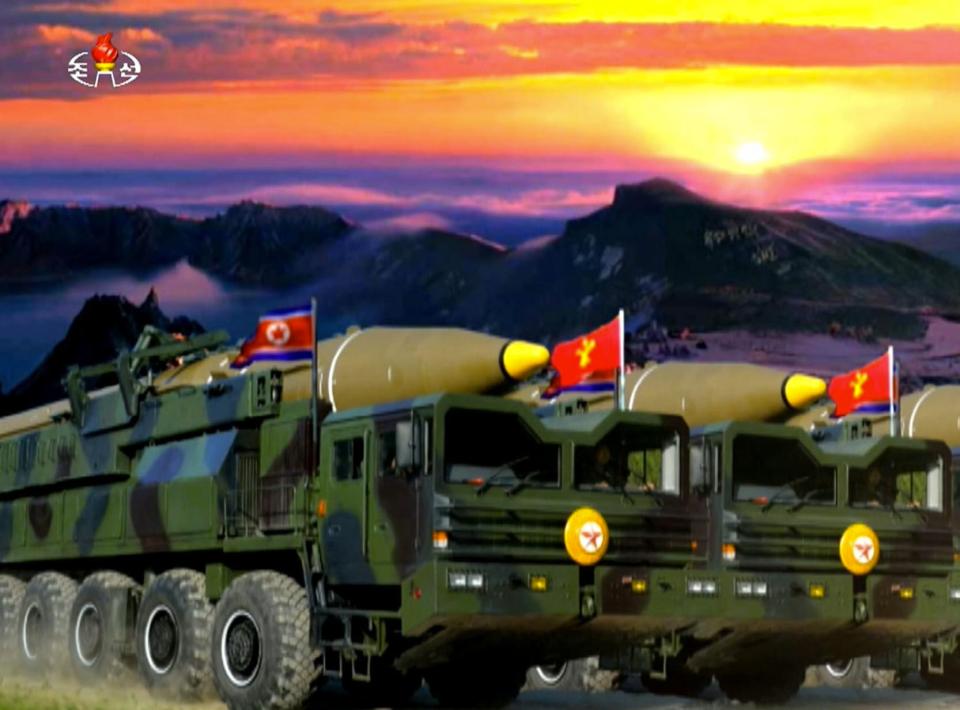 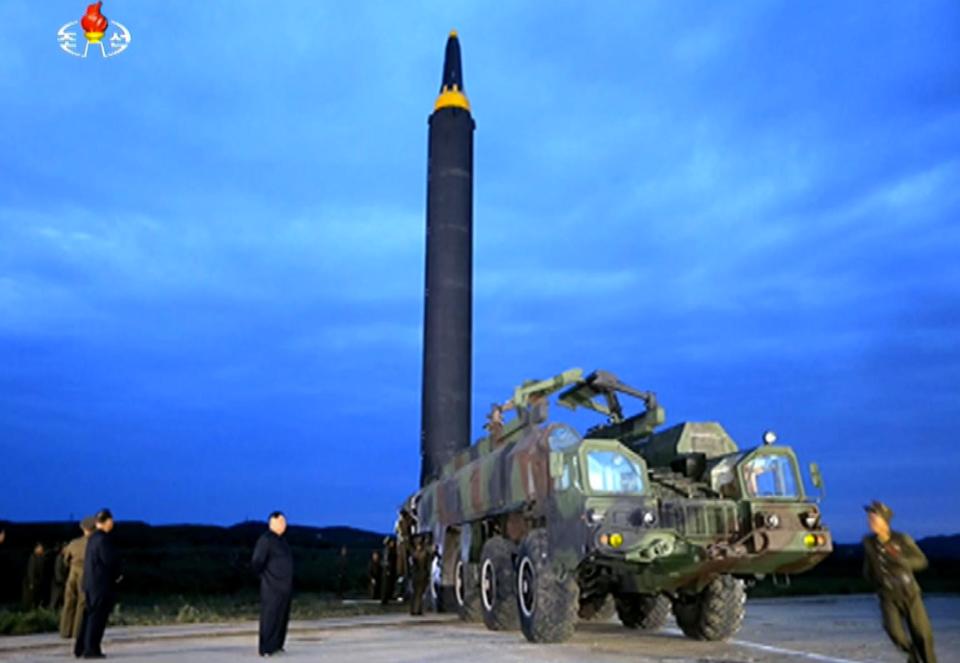 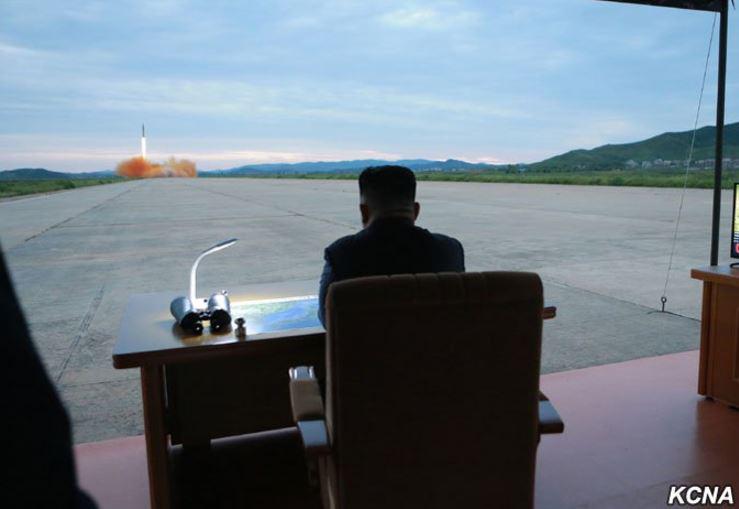 Kim appeared to watched on as the latest rocket was launched 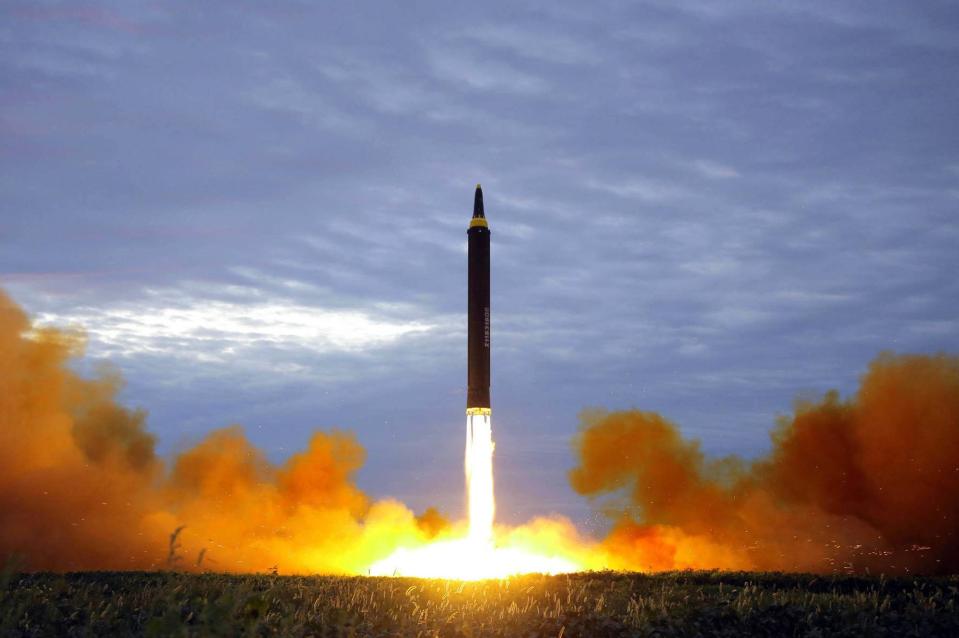 Images of the launch that stunned the world have finally emerged

The Hwasong-12 intermediate range missile was launched from near Pyongyang

And added that “no one can guess when a nuclear war may break out”.

The statement from Kim’s mouthpiece added: “The USA’s more persistent moves to launch a nuclear war on the Korean peninsula would precipitate its final doom.”

The President tweeted: “The U.S. has been talking to North Korea, and paying them extortion money, for 25 years. Talking is not the answer!”

✔@realDonaldTrump The U.S. has been talking to North Korea, and paying them extortion money, for 25 years. Talking is not the answer!

Kim has vowed to fire more missiles as pictures emerged of the despot cackling maniacally as he over saw the launch described as “just a curtain-raiser”.

Just one day after his latest launch brought his country and American one step closer to war the smirking communist called for more weapons testing over the Pacific to advance his country’s ability to contain Guam. 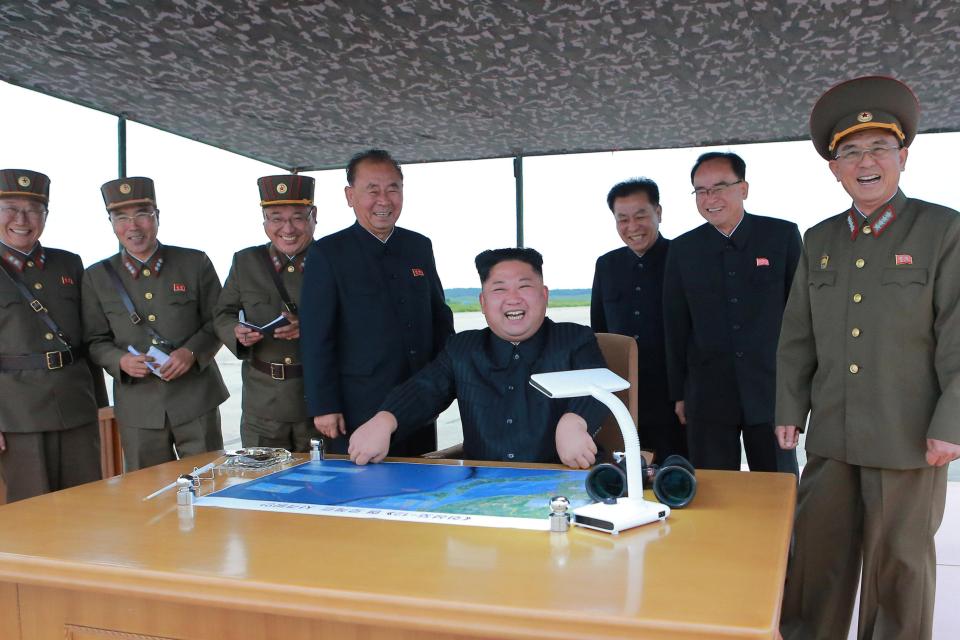 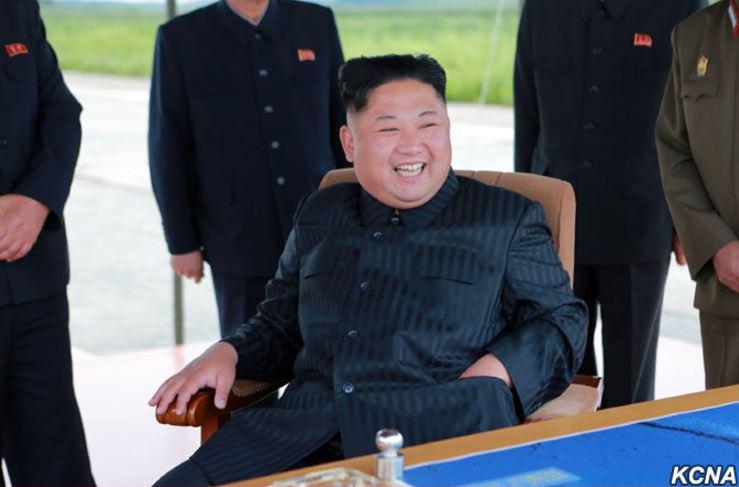 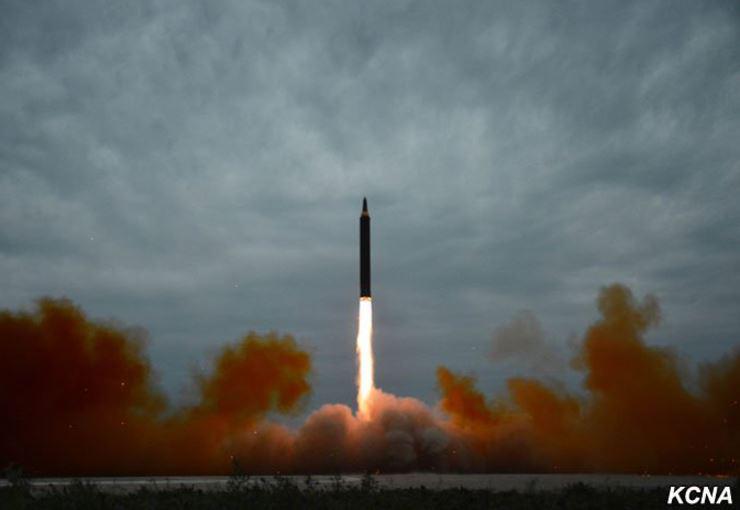 State media reported that the dictator had said: “The current ballistic rocket launching drill like a real war is the first step of the military operation of the Korean People’s Army in the Pacific and a meaningful prelude to containing Guam.”

The Rodong Sinmun newspaper, mouthpiece of the North’s ruling party, on Wednesday carried more than 20 pictures of the launch near Pyongyang.

One showed Kim smiling broadly at a desk with a map of the Northwest Pacific, surrounded by aides.

North Korea today vowed to execute reporters from two South Korean newspapers, saying they insulted the country’s dignity while reviewing and interviewing the British authors of a book about life in the isolated country.

It also objected to the translated title of the South Korean edition as “Capitalist People’s Republic of Korea” and the book’s cover that replaced the red star in North Korea’s official seal with the US dollar mark.

North Korea’s Central Court also “sentenced to death” the presidents of the newspapers and said the North will “track down to the end and cut off the dirty windpipes” of those responsible for such provocations.

Seoul’s government is ready to take “every measure needed” to protect its citizens, the ministry said in a statement.