Josh Shepherd, Twitter
Josh Shepherd < BACK TO VOICES
Josh M. Shepherd covers culture, faith, and public policy issues as a Contributor to The Stream. He has served on staff at Focus on the Family, The Heritage Foundation, Bound4LIFE International, and two Congressional offices. His articles have appeared in media outlets including The Federalist, The Daily Signal, Boundless, The Christian Post, and Christian Headlines. A graduate of the University of Colorado, Josh and his wife live in the Washington, D.C., area.

With one month until the annual March for Life in Washington, D.C., the pro-life movement is taking stock of progress over the past year. Abortion rates continue to drop to new lows, abortion centers nationwide are closing, and even long-accepted fetal tissue research has come under scrutiny.

It’s less certain how other battles will advance. A “conservative” Congress closes the year keeping intact over $500 million in taxpayer funds to Planned Parenthood. Most reporting on the decline of abortion does not reflect increasing use of the RU-486 pill regimen. And a new Supreme Court Justice disappointed some pro-life leaders with his stance on a recent case.

This fall, pro-choice activists irate over the Supreme Court nomination fight disrupted prayer vigils outside abortion centers. “They came out in droves, with no interest in dialogue or tolerance,” says Shawn Carney, president of 40 Days for Life. “From New York to Wisconsin, people banged pots and pans. They were just screaming at the top of their lungs.”

Reached via phone at their Texas headquarters, Carney spoke about what their thousands of praying volunteers encountered this fall, how public prayer differs from shaming, and why he believes prayer is effective advocacy.

Your team just completed the fall campaign of 40 Days for Life. How many locations participated and what happened?

Shawn Carney: It was our largest campaign ever, with prayer vigils in 415 cities in 27 different countries. There were two overall themes. The positive theme is that we had more women come forward to share their stories than ever before.

Starting on day one in Nashville, a woman stopped at the vigil. She said, I was going to have an abortion two years ago and y’all were out here. Keep up the great work. This happened many times for our groups across the nation during those 40 days.

On the negative front, we saw an unprecedented amount of persecution. At 40 Days for Life, we’re used to getting a middle finger — people driving by, yelling whatever they want. We don’t cry wolf at this ministry or whine about bad things happening to us. But because of the Supreme Court battle playing out with Justice Kavanaugh, there was an elevated anger and hatred towards people peacefully praying out on the sidewalk.

“They came out in droves, with no interest in dialogue or tolerance. From New York to Wisconsin, people banged pots and pans. They were just screaming at the top of their lungs.”

We had organized socialists, anarchists, Satanists, homosexual activists, transvestites, and everybody in between. All of them came to oppose our vigils — yelling, screaming, and carrying vulgar signs. In a couple of cases, they broke the law. Paid protesters in New York refused to listen to the NYPD. We have all of that on video.

And their message was not even in sync with the abortion industry. A lot of these locations are Planned Parenthood centers. The director would tell the pro-abortion socialists to leave, that they were disturbing the peace. They’d get mad at each other. It really was unbelievable.

Striving for Accuracy in Advocacy

How do you track the number of lives “saved” and attribute it to these prayer campaigns?

Carney: The “saved” number is our most conservative number. We don’t exaggerate at all. Recently, we passed the threshold of over 15,000 babies we know of saved through 40 Days campaigns. Those are ones we’ve confirmed the mom did not have the abortion. It does not include women who drive by and decide not to have an abortion or others we don’t know about.

One of the beautiful stats that really gets us up in the morning is one former abortion clinic directors told us. Abby Johnson has said repeatedly what Planned Parenthood’s internal tracking revealed: that their no-show rate goes as high as 75 percent when people are out front praying. Those two, three, four, or 50 people praying may not see the results, but the no-show rate tells the whole story.

With our conservative reported figures, we don’t go out and say we’ve saved 600,000 babies. But it could be that high, we just don’t know. We do know of 15,000 for certain saved over the past 11 years. A lot of these kids are now in Little League, in fifth or sixth grade. They’re playing soccer, receiving first Communion, and living life which is a beautiful thing.

Some would assume praying outside abortion centers is intended as a form of shaming. Why pray in public?

Carney: At home and in our churches, we need to pray for an end to abortion. We have to vote pro-life. Those are the most basic things we can possibly do. But I don’t think it’s either/or. If we’re going to treat abortion for what it is — the taking of an innocent human life in a very barbaric fashion that we would not wish upon our greatest enemy — then we have to show up.

It is the nature of Christianity and the church to be missionaries. We go to the ends of the earth, the most dangerous places in the world to bring the Gospel. Then we can surely go around the corner in our own neighborhoods. Life is the most precious gift. The very way our Lord came into the world — through the womb, as a baby — is being attacked and ripped apart.

When we go, we do so joyfully and peacefully. If we were out there shaming people, there would not be 15,000 women who have turned around and asked for help. There sure as heck would not be 178 abortion facility workers who had a change of heart and left their jobs.

40 Days for Life proves that shaming does not work. But prayer, joy, and real alternatives do. 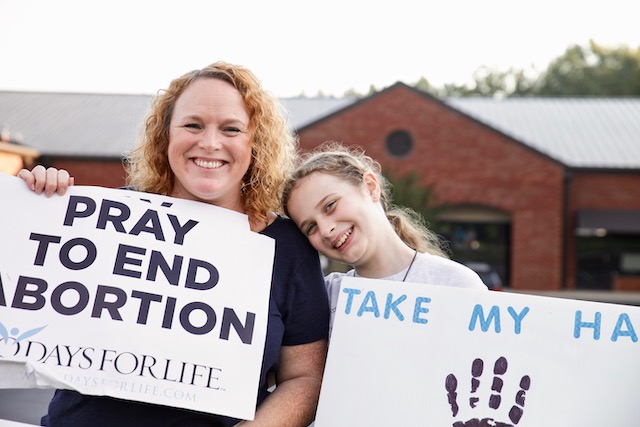 Your new book compiles 40 stories from prayer vigils across the globe. Could you share one of the incidents you chronicle?

Carney: One woman who was wheelchair-bound would take a bus and go to Planned Parenthood to join a 40 Days for Life prayer vigil. She lived in Santa Cruz, California, outside of San Francisco. People move there because they think the Bay Area is too conservative, believe it or not.

Just imagine, she’s on the street of this extremely liberal progressive city. She had people spit on her, laugh, and mock her. They made fun of her because she’s pro-life. She endured it and just kept going.

One day, a couple went in. From the lobby they could see her sitting out there. They saw her pro-life sign. The boyfriend ran out and went up to her wheelchair. He asked if he could hold her sign, picked it up, and directed his girlfriend’s attention inside to this young woman in the wheelchair. Look at her, she’s praying for us! he said to his girlfriend who watched.

“One woman who was wheelchair-bound would take a bus and go to Planned Parenthood to join a prayer vigil. She had people spit on her, laugh, and mock her. She endured it and kept going.”

The young woman inside nodded and grinned. Her boyfriend handed the sign back to the woman in the wheelchair. When they walked out, he said, “Thank you for being here. You saved my baby today — I couldn’t have done it without you.” It’s a beautiful story of this hero, and the only “save” she ever saw after years going out. I love that this made it into the book, but she didn’t get to see it in print. She passed away before the book released.

Think of all the excuses others give to not go out, yet she overcame so many obstacles to go out there. As a result, she saved a baby.

Other pro-life groups are concerned chiefly with national politics. Why does 40 Days for Life focus on grassroots advocacy?

Carney: That’s where we started. This is a simple campaign that began in College Station, Texas. It started with an hour of prayer. Now it has spread to 50 countries, by the grace of God — and we never forget that.

God has called us to do this, and we feel we are joining him in how he’s using 40 Days for Life. We work closely with pro-life groups in Washington. They have to butt heads to get us pro-life laws, pro-life politicians, and pro-life presidents. But that’s not what we are called to do at the grassroots.

It doesn’t matter who is president or what happens in a given election, 40 Days for Life will be out in front of as many abortion facilities as possible. We’re going to do that until abortion ends. It has given us great focus and fortitude.

Learn more about 40 Days for Life and the new book The Beginning of the End of Abortion by Shawn Carney. Explore The Stream’s coverage of human life issues, and sign up to receive top stories every week.