Why Prayer, Fasting and Almsgiving in Lent? Thinking about what to give up for Lent? Wondering why we fast during the season of Lent? Why do Catholics (1) pray, (2) fast, and (3) give alms during Lent? What is traditional Catholic fasting and where does this tradition come from? Also, how does this connect to Jesus’ Temptation in the Desert?

The basis for all this will amaze you!

I think, if asked, most savvy Catholics would be able say something along the lines of “well, it comes right out of the Bible.” Maybe not chapter and verse – specifically, Matthew 6:1-18 as provided above — but I think most Catholics realize the tradition is rooted in Scripture.

But there’s SO MUCH MORE to it!

These three practices – prayer, fasting, and almsgiving – are hidden throughout Scripture.

They correspond to the three temptations Christ experienced in his 40 days in the desert, and …

They correspond to the three temptations Eve experienced in the Garden of Eden, and …

They correspond to Jesus’ second round of temptations, which occur in the Garden of Gethesemane …

They are everywhere! But why?

THE THREE KINDS OF SIN & THE THREE REMEDIES TO SIN

So, here are the Three Lusts (or Three Concupiscences):

(1) Lust of the Flesh — the desire which comes from our bodies, such as for food, sexual gratification, sleep, etc.
(2) Lust of the Eyes — the desire to possess what we see, such as money, objects, the flesh of another, etc.
(3) Pride of Life — the desire for power, esteem, false glory, etc.

But why do these three affect us so deeply? Why are we so vulnerable to these three specific attacks from the Devil? Why this pattern?

Because it’s the same pattern of attack the Devil took against our first parents to bring about the first sin:Original Sin. 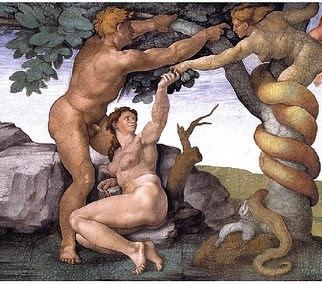 Compare the three lusts above with the following verse from Genesis:

Isn’t that amazing? They’re right there in text.

Before we start blaming Eve …

Adam was at her side the entire time. The devil was bearing down on Eve in the form of a serpent, but not just any serpent. The Hebrew word is nahash, which translates to Greek as leviathan. This a huge, monstrous dragon, not some benign garter snake, and Eve was a damsel in distress. And where was Adam? His position is provided by the Hebrew word imo in the account, which means translates as “at her elbow.”

This should be a lesson to all men…

Not only did Adam succumb to the three lusts in eating the fruit, but he also succumbed to another sin: cowardice in not defending Woman. Therefore, we see with men, even today, a fourth component to Satan’s attack. I would recommend for men, therefore, a fourth component to their Lenten observance: abstaining from pornography or other forms of degrading and objectifying women.

BRINGING IT FULL CIRCLE: HOW DOES JESUS RESPOND TO THE THREEFOLD LUSTS IN HIS 40 DAYS IN THE DESERT? 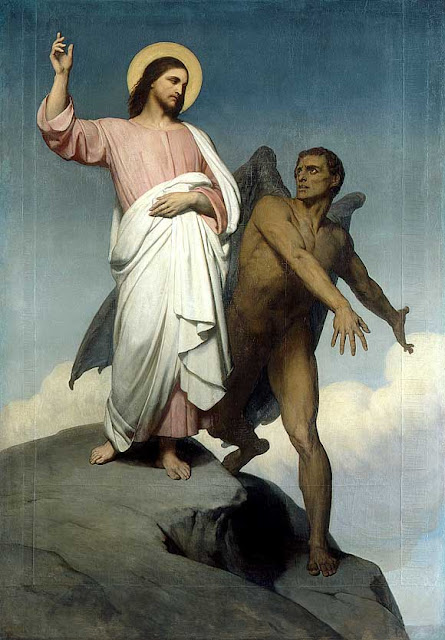 This is also why Lent is 40 days, right?

FASTING: “Then Jesus was led up by the Spirit into the wilderness to be tempted by the devil. And he fastedforty days and forty nights, and afterward he was hungry.” (Matthew 4:1-2)

TEMPTATION: “The tempter came and said to him, ‘If you are the Son of God, command these stones to become loaves of bread.'” (Matthew 4:3)

RESPONSE: “But [Jesus] answered, ‘It is written, ‘Man shall not live by bread alone, but by every word that proceeds from the mouth of God.'” (Matthew 4:4)

The Devil takes Christ to the most visible place on the planet to the Jewish people: the “pinnacle of the temple”. Here, the Devil tells Jesus to perform a miracle, so that all may see it. If Jesus did this, he would be acclaimed as Messiah and what? Jesus wouldn’t have to die on the cross. The cross is the most awful sight to the Devil.

TEMPTATION: “Then the devil took him to the holy city, and set him on the pinnacle of the temple, and said to him, ‘If you are the Son of God, throw yourself down; for it is written, ‘He will give his angels charge of you,’ and ‘On their hands they will bear you up, lest you strike your foot against a stone.'” (Matthew 4:5-6)

What is the Devil quoting here? It’s Psalm 91, which just happens to be an ancient Jesus exorcism Psalm — I wonder where Satan has heard this verse before? Also, the Devil skips the next verse: “You will tread on the lion and the adder, the young lion and the serpent you will trample under foot.” Jesus is about to trample the serpent under his foot, as was prophesied in Genesis 3:15, the Messiah will crush the serpent’s head. Satan doesn’t like this too much.

RESPONSE: “Jesus said to him, ‘Again it is written, ‘You shall not tempt the Lord your God.'” (Matthew 4:7)

TEMPTATION: “Again, the devil took him to a very high mountain, and showed him all the kingdoms of the world and the glory of them; and he said to him, ‘All these I will give you, if you will fall down and worship me.'” (Matthew 4:8-9)

What is Christ’s mission? To restore all the nations and kingdoms of the world to His Father. BUT, if Jesus just bows down to the Devil, Satan will just give him the world, and there will be no need to die on the Cross.

RESPONSE: “Then Jesus said to him, ‘Begone, Satan! for it is written, ‘You shall worship the Lord your God and him only shall you serve.'” (Matthew 4:10)

(1) Pray: We pray to defeat the Lust of the Eyes

(2) Fast: We fast to defeat the Lust of the Flesh

(3) Give Alms: We give alms to defeat the Pride of Life

We give away money to the poor, because (a) giving away money teaches us not to worship it, and (b) to help those in need. Whatever it is that you worship, practice giving it away during Lent. If it’s money, give it away. If it’s nice clothes, give them to a charity, like St. Vincent de Paul, and clothe a poor person. If it’s electronics or social media, turn them off. Turn off your iPhone for family time.

I hope this helps you dig deeper into your Lent! I hope we can all learn the joy of giving away our pleasures.