Why We Should Care About ‘Human Ecology’ The word “ecology” has a bad rap. Perhaps it’s because the left often uses the word as a club to beat political opponents. And as a roadblock to keep humans from “interfering with nature.” But Christians need to embrace the concept. That’s especially true if we’re committed to human life, marriage and families. 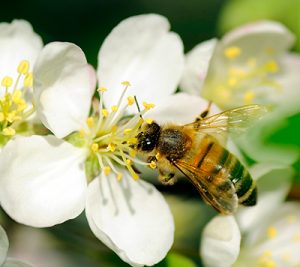 “Ecology” refers to the idea that plants and animals depend upon each other and their natural surroundings. It also refers to the science that studies these relationships.

Some honey bees, for instance, draw nectar from apple blossoms to make honey. By flying to and fro on different flowers and trees, they pollinate the flowers. The trees can then produce seeds and fruit, which farmers can harvest. Apple farmers often cultivate beehives or bring in beekeepers for this reason.

Life on earth is not just about competition, about “nature, red in tooth and claw.” It’s filled with cooperation and altruism as well.

Or take the agouti, a cute little rodent that forages the jungle floors of Brazil. It’s the only critter around with teeth sharp enough to breach the hard pods of the towering Brazil nut tree. Agoutis grind through the outer shell and eat a couple of the big nuts inside. They then bury the rest for later, and forget where they buried them. So, they look for another pod to chew open, and … you can guess the rest.

Agoutis depend on Brazil nut trees to drop the pods to the ground. The trees depend on the agoutis to break the pods, bury some of the nuts, and forget where they buried them. That, in a nutshell, is an ecosystem.

Life on earth is not just about competition, about “nature, red in tooth and claw.” It’s filled with cooperation and altruism as well. The Catholic Catechism of the Catholic Church, reflecting on the first chapter of Genesis, says this is how God wanted it:

God wills the interdependence of creatures. The sun and the moon, the cedar and the little flower, the eagle and the sparrow: the spectacle of their countless diversities and inequalities tells us that no creature is self-sufficient. Creatures exist only in dependence on each other, to complete each other, in the service of each other.

Like those bees and agoutis, we are embodied creatures. We need food and water and shelter to survive. But unlike bees and agoutis, which act mostly on instinct, we’re also spiritual and social beings endowed with free will. No one is an island. We are each born into families and raised by parents (ideally). We live in neighborhoods and cities and countries, whose customs and cultures shape our habits and outlooks. We are taught by teachers. We worship in churches. We marry and form families. And even as adults, we need others: Long bouts of loneliness can wear down our bodies.

Human ecology, then, goes beyond the clean air, water, food and shelter we need to survive. It includes not just the laws of physics, but the natural law. It includes all those concrete institutions we need to become more than we were. To develop virtue. To be happy. To flourish.

In the last fifty years, the most vital human institutions have been subject to vicious assault.

Up With Nature! Down With Humans!

Here’s a great paradox of our age. In the last fifty years, we’ve become much more aware of natural ecosystems. We fret about them far more than our ancestors did.

This includes human ecosystems. And despite problem areas, the air we breathe and water we drink are cleaner than ever. In the developed world, almost no one dies from the air and water-borne diseases that beset our ancestors for millennia. We’ve learned to clean up most the industrial pollutants of the last century, from lead to sulfur dioxide. We continue to find clever waysto clean up after ourselves. Yet still, leading voices in our culture push the cause of natural ecology with life-and-death urgency.

In contrast, our culture has gotten ever more hostile to the “ecosystems” that distinguish us from plants and animals. In the last fifty years, the most vital human institutions have been subject to vicious assault.

The first environment in which we enter the world — our mother’s womb — is now a high-risk zone. Roughly one in fourAmerican kids is raised by only one parent. (That number is far higher for the poor and most minorities.) About half of marriages end in divorce. The link between sex and procreation grows ever wider.

Governments around the world now deign to redefine marriage, an institution that predates every state and every society. And fast on the heels of that assault is the attack on human nature itself. Even the existence of men and women, of male and female, father and mother, is up for grabs.

This makes no sense. We depend not just on healthy water and soil, but on healthy culture, on vibrant families and churches and neighborhoods.

And who better to do that than believers who know that God created us, male and female, body and soul?

Jay Richards is the Executive Editor of The Stream and an Assistant Research Professor in the Busch School of Business and Economics at the Catholic University of America. Follow him on Twitter.

*Check out the work of the Institute for Human Ecology at The Catholic University of America.