A Pastor’s Urgent Plea — How Trump Could Lose in 2020, by Shane Idleman Cuban-born Abp. Pérez will undoubtedly be a strong ally of Los Angeles Abp. José Gómez, the newly-elected USCCB president and a native of Mexico. Archbishop Pérez’s appointment to one of America’s most prominent and prestigious sees at the age of 58 guarantees that he will be a force in the United States Conference of Catholic Bishops (USCCB) for years to come.

By the way, just in case you might have thought that America’s bishops elected Gómez as USCCB president to get to the bottom of the McCarrick sodomite syndicate, the Pérez appointment should make one thing clear: McCarrick has officially been tossed down the memory hole.

And that’s not all. Under Abp. Gómez’s leadership, the USCCB will also ignore the fraud, coverups, financial scandals, and homosexual perfidy in its own ranks. Instead, it will accelerate efforts to create a “more Hispanic Church.” 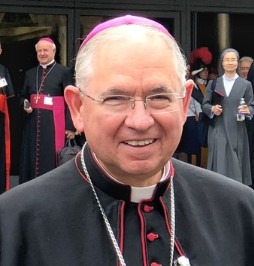 As archbishop of Los Angeles, Gómez has pursued that goal relentlessly for years. He spelled out his vision in detail at the Napa Institute in 2011, describing his plans for the “Next America,” a United States which will be superior to the America we have now because Hispanics, specifically illegal aliens, will build in America a better society, devoted to faith and family.

What’s wrong with America now? “We have a legal structure that allows, and even pays for, the killing of babies in the womb,” Abp. Gómez said. “Our courts and legislatures are redefining the natural institutions of marriage and the family. We have an elite culture — in government, the media and academia — that is openly hostile to religious faith.”

Right on target, Your Excellency. But why, instead of pursuing that valid insight about America’s elites, did you attack the majority of Americans for our “nativism” and “bigotry”? Instead of going after the corrupt elites you so clearly identify, why did you criticize America’s flourishing culture of “individualism, work ethic and rule of law that we inherited from our Anglo-Protestant forebears”? Aren’t we legal Americans devoted to faith and family too?  ….