“I write in strong support of House Bill 5127, which would enshrine the important provisions of Roe v. Wade in state law,” wrote Governor Gina Raimondo (D) in a Jan. 29 letter to Chairman of the House Committee on Judiciary Robert Craven.

“I support efforts to protect Rhode Island women’s right to reproductive health care,” she wrote. “This bill maintains the status quo in Rhode Island as it has existed for decades, but is important now in light of uncertainty about changes that may come from the Federal government,” she added. The bill is titled Rhode Island Reproductive health Care Act (2019-H 5127). 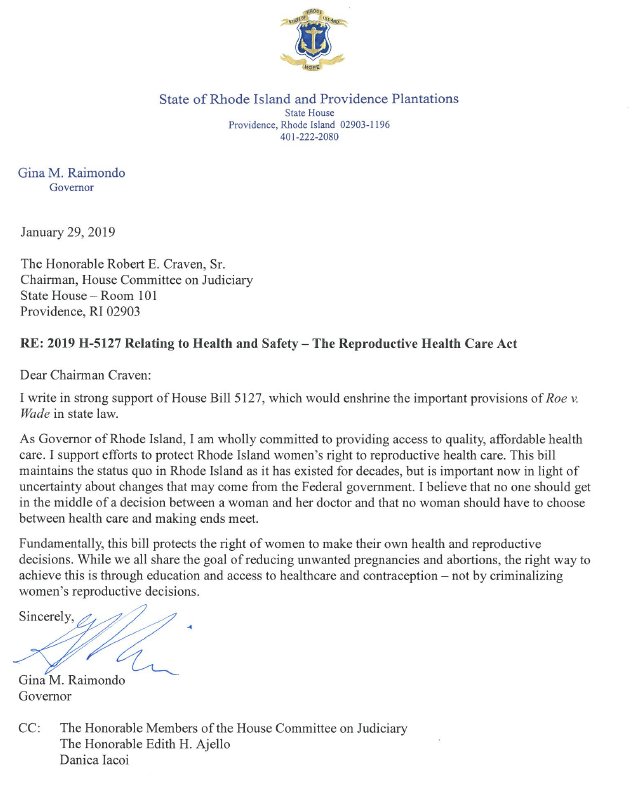 I believe that no one should get in the middle of a decision between a woman and her doctor and that no woman should have to chose between health care and making ends meet. #RHCA

It would also “undermine the authority of the State and the Department of Health from enacting and adopting constitutional restrictions on the performance of abortions at facilities where abortions are performed.” And, it would “require the State to pay for all abortions sought by Medicaid-eligible pregnant women and women covered by the “payer of last Resort” program.”

In addition, H 5127 would “repeal existing constitutional protection for a viable unborn child from criminal assaults on the child’s mother and H 5125 would substantially ‘water down’ the State’s parental consent statute by allowing consent to be obtained from persons who have no constitutional right to give consent (grandparents and adult siblings).”

“Neither H 5127 nor H 5125 could plausibly be regarded as merely ‘codifying’ the principles of Roe v. Wade,” states Rhode Island Right to Life.

Governor Raimondo vowed to support abortion legislation earlier this month in her State of the State address.

“Let’s make this the year we codify women’s access to reproductive health care here in Rhode Island,” Raimondo said in her speech.

Raimondo, like Cuomo, identifies as Catholic while fervently supporting abortion.

New York passed the Reproductive Health Act (RHA) on this year’s Roe vs. Wade anniversary (Jan.22), with the Cuomo championing the law and joining in the celebration of its passage.

The RHA eliminated restrictions on abortion, made abortion a fundamental right, removed recognition of unborn children older than 24 weeks as potential homicide victims and allows licensed health practitioners other than full doctors to perform abortions. The law enshrines abortion into state law as a way of protecting the legal status of the procedure in the event the Supreme Court should overturn Roe – something abortion supporters fear with the appointment of two new Supreme Justices picked by President Trump.

Raimondo, along with the bill’s co-sponsors Sen. Gayle Goldin and Rep. Edith Ajello, has been pushing the law since 2017, WRGB News Albany reports. The bill’s pushers say politicians in Washington are putting women’s health care at risk.

“With women’s healthcare under attack in Washington, it’s more urgent than ever that we take proactive steps to enshrine women’s access to reproductive care here in Rhode Island,” a Raimondo spokesman said.

Goldin and Ajello said the goal is to “defend against threats at the federal level.” These threats, according to them, include “a conservative-leaning Supreme Court and a president and the leader of the U.S. Senate who are opposed to reproductive freedom” and want to protect Rhode Islanders “in the case of any federal rollback of rights.”

“Unfortunately, with the individuals in power in Washington right now, there is a very real chance that Roe v. Wade could be overturned at some point in the near future,” Ajello stated via a press release, “leaving Rhode Island women subject to these insidiously restrictive, harmful and patriarchal reproductive laws.”

A spokeswoman for Ajello told NBC 10 News on Monday of this week that more than half of the House and almost half of the Senate have signed on as co-sponsors.

Raimondo was elected as the first female governor of Rhode Island in 2014. The state that statistically has the most Catholics of any state in the U.S. put her in office despite her having stated publicly that she opposed the Catholic Church’s teaching on life at a Planned Parenthood Rhode Island PAC event formally endorsing her candidacy.

“You know the Catholic Church has a clear position, and I have a clear position,” she said. “And I am clearly pro–choice, and as I’ve said, I as governor [will] support the decision in Roe v. Wade.”

Raimondo’s Catholic alma mater, LaSalle Academy of Providence, removed her photo from the school’s Wall of Notables after she made those statements.

Raimondo was upfront about her support for abortion numerous times during her campaign, in one instance declaring she was “more pro-choice” than her opponent.

Providence Bishop Thomas Tobin declined to attend her inauguration as a matter of conscience.

“Over the weekend I did receive a formal written invitation to the Inauguration, the courtesy of which I appreciated,” Tobin wrote to the Providence Journal in January 2015. “However, as previously announced I will be offering Holy Mass at the Cathedral at that same time to ask for God’s blessings upon our state and nation and our public servants.”

“I should add, though, that in conscience, it would always be a problem for me personally to attend the inauguration of any public official who promotes or supports abortion, which we consider to be a very grave moral evil,” ” said Tobin.

Democratic Virginia Delegate Kathy Tran admitted during a subcommittee hearing about the bill she had introduced, known as the Repeal Act, or Virginia House Bill 2491 would allow abortion even once the mother had begun dilating in labor.

Both comments set off a firestorm.

Catholics continue to call for canonical penalties for Cuomo in the wake of New York’s radical abortion law.