The Anti-Mary: The Terrifying New Patroness of Abortion Our Lady, Queen of Angels, pray for us!

Hurricane Harvey has brought attention to a non-profit dedicated to raising funds for abortion: The Lilith Fund. But who is this Lilith? Despite her dark origins, she has become an Icon of Feminism and now the Patroness of Abortion. Check out her connection to Adam and Eve from Jewish folklore. Also, find out why an alliance with Lilith is both terrifying and illuminating.

In the aftermath of Hurricane Harvey, nonprofits are scrambling to take care of the needs of the homeless, the stranded, those who have lost everything, and … those who want to abort their children?? One of these is not like the other.

The Lilith Fund is a Texas nonprofit striving for “reproductive equity,” whatever that is. In the wake of the hurricane’s devastation, the group created an emergency fund to provide financial help to “Harvey survivors seeking abortion care.”(1)

Pundit Sean Davis hit the nail on its head when he tweeted that the Lilith Fund “is a great investment if you think the biggest problem with Harvey is that it didn’t kill enough people.” 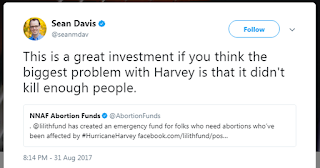 All joking aside, this is a new level of insidiousness for the pro-abortion movement. But why?

I kid you not. Lilith is a sexually wanton demon that comes in the night and steals newborn babies. The name “Lilith” actually means “night.” As you will see, she is the tailor-made patroness or icon of the abortion movement.

She appears to be the surviving member of an ancient class of female demons, known to the Babylonians and other Mesopotamian peoples as the lilītu. The Sumerian King List (2400 BC) contains the earliest reference to her. It states that no less than the greatest figure of Babylonian mythology, Gilgamesh, was the son of a Lillu-demon.(2)

The origin of the story of Lilith may have been a wilderness spirit known as the “dark maid” who appears in the Sumerian myth “The descent of Inanna” (ca. 3000 BC). There is also a reference to her found in a Seventh Century BC tablet uncovered at Arslan Tash(3), Syria. It depicts Lilith as a winged sphinx across who body is written, “O flyer in a dark chamber, go away at once, O Lili!”(4) This is representative of ancient prayers used to protect women in labor!

At some point, she was incorporated into Jewish folklore. There is a large amount of ancient Semitic texts beyond that which is preserved as the Hebrew Bible or the Tanakh, i.e. the Old Testament. Nevertheless, there may be an obscure reference to Lilith in the Bible. At Isaiah 34:14, this is how the Prophet describes an inhospitable wilderness: “There goat-demons shall greet each other, and there the lilit shall find rest.” Scholars disagree as to the meaning of the word “lilit.” This is the only time this term appears in Isaiah, and there is, therefore, no basis for comparison.(5) While some believe it is a reference to the demon Lilith, others dismiss it as a reference to a night owl or screech owl. However, both could be true. In a Babylonian terra-cotta relief dating from about 2000 BC, Lilith is actually depicted with the wings and feet of an owl.(6) In the Vulgate, as well, St. Jerome translates the Hebrew word as lamia, an evil being that killed infants and seduced sleeping men. 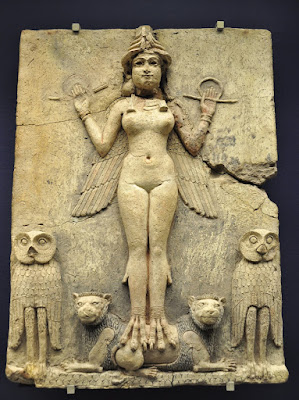 There is a reference to Lilith in the Jewish commentaries on the Scriptures: “One may not sleep in a house alone, and whoever sleeps alone is seized by Lilith.”(7) Lilith is known in demonology as a succubus.

This is where it gets really interesting. Between 700 and 1000 years after Christ, Lilith began to have an entirely new origin story. In the Alphabet of Bin Sira, an anonymous work, Lilith is depicted as the first wife of Adam.(8) Here is the passage concerning Lilith’s creation:

[God] said, “It is not good for man to be alone” (Genesis 2:18). He then created a woman for Adam, from the earth, as He has created Adam himself, and called her Lilith. Adam and Lilith began to fight. She said, “I will not lie below,” and he said, “I will not lie beneath you, but only on top. For you are fit only to be in the bottom position, while I am to be in the superior one.” Lilith responded, “We are equal to each other inasmuch as we were both created from the earth.” But they would not listen to one another. When Lilith saw this, she pronounced the Ineffable Name and flew away into the air.

God then sent three angels to bring Lilith back. The angels came upon her at sea:

They told her God’s word, but she did not wish to return. The angels said, “We shall drown you in the sea.” “Leave me!” she said. “I was created only to cause sickness to infants. If the infant is male, I have dominion over him for eight days after his birth, and if female, for twenty days.” When the angels heard Lilith’s words, they insisted she go back. But she swore to them by the name of the living and eternal God: “Whenever I see you or your names of your forms in an amulet, I will have no power over that infant.”(9)

There are many interesting features to this text, but I would first like to note that Lilith has a potty mouth – she curses the Name of God twice in this short passage. Actually, this reminds me of some of the vulgar pro-abortion rhetoric often heard at rallies and marches. 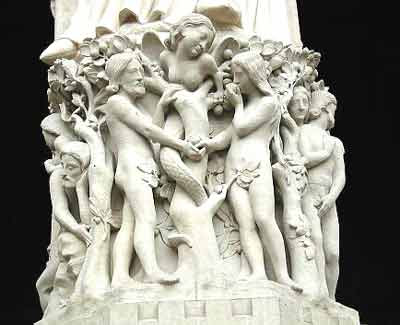 Lilith has become an icon of feminism due in large part to the first passage from Ben Sira quoted above (the second part of the passage is usually ignored). Notice that Lilith is born from the same earth from which Adam is created by the hand of God, unlike Eve who is formed from a rib from Adam’s side. Lilith argues that her origin determines her equality with Adam and the basis for her rejection of Adam’s superiority.

Nevertheless, Lilith has been embraced as the first-ever spokesperson for women’s rights. Rabbi Jill Hammer writes the following about Lilith’s surprising fandom: “The most notorious demon of Jewish tradition becomes a feminist hero.”(10) 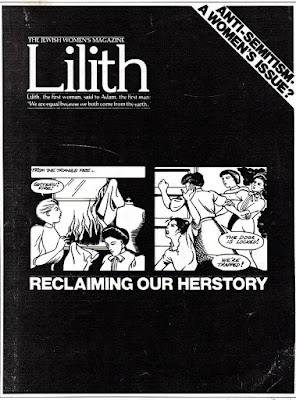 Lilith has been embraced also as an icon of lesbianism. You probably remember the Lilith Fairs during the summers of the late ’90s? The music festival, which has been called “Lesbian-palooza”, featured only woman musicians or woman-led bands, such as Sarah McLachlan, Sheryl Crow, Tracy Chapman, Paula Cole, Fiona Apple, Joan Osborne, Indigo Girls, Shawn Colvin, and Natalie Merchant. Lilith Fair was a benefit concert for charities — can you guess which charities were involved? Planned Parenthood, among others. “Offering booths to Planned Parenthood and helping both the AIDS awareness group LIFEBeat and the Rape, Abuse and Incest National Network hotline are among the clear highlights of the tour,” Sarah McLachlan said in an MTV interview. To be fair, the 2010 Lilith Fair revival was heavily criticized for allowing donations to benefit pro-life crisis pregnancy centers.

WHY IS LILITH THE ANTI-MARY?

Whereas Lilith said “No” to God, the Virgin Mary said “Yes.” In the passage above from the Ben Sira text, Lilith explicitly tells God “No.” Just as there is prophesied to be an Anti-Christ, Lilith is the Anti-Mary.

While still apparently far superior to Lilith, Eve also implicitly told God “No” when she committed the Original Sin. As Saint Irenaeus said, the knot of Eve’s disobedience was untied by Mary’s obedience. 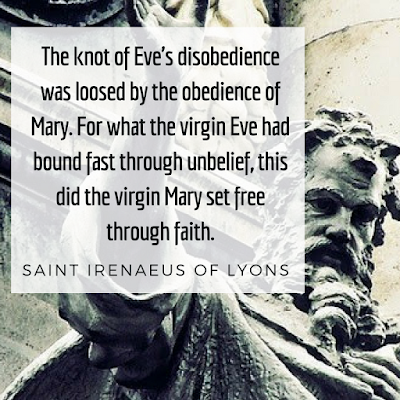 Also, notice this odd statement in the passages above:

But she swore to them by the name of the living and eternal God: “Whenever I see you or your names of your forms in an amulet, I will have no power over that infant.”

I would argue that Saint medals, especially the Miraculous Medal and the Scapular, are the amulets Lilith is referring to in the passage above. If the form of angels is repellent to her, how much more the Queen of Angels? Perhaps this is part of why the Blessed Mother encourages us to wear these, because they are repellent to the Cursed Mother. 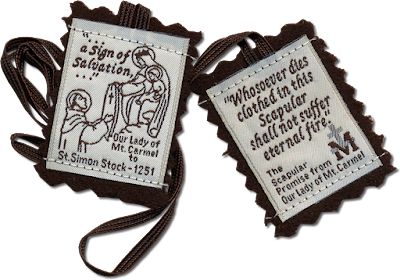 So, how do we counter-act the intervention of Lilith? Through the intercession of the Blessed Mother!

Our Lady, Queen of Angels, pray for us!

Please let me know what you think about all this in the comments below! Also, please share this post with people you know, especially those in Texas.

(1) DeSanctis, Alexandra, “Hurricane Harvey Nonprofit Fundraises for . . . Abortion?”
National Review, Sept. 1, 2017.
(2) Patai 1990.
(3) On a completely unrelated note, I felt that I had to comment on the odd juxtaposition of the words “Arslan Tash”, as “Aslan” and “Tash” are both featured in The Chronicles of Narnia, wherein Aslan is the embodiment of Jesus and Tash is a demonic deity, the antagonist to Aslan in The Last Battle.
(4) Adler, Shelley R., Sleep Paralysis: Nightmares, Nocebos, and the Mind-body Connection, Rutgers University Press (2011): 38.
(5) The term is hapax legomenon, a word that occurs only once in a particular text.
(6) ibid.
(7) Talmud, tractate Shabbath, folio 151b.
(8) More on the spread of Lilith tale in folklore: “This version of the Lilith tale in the Alphabet of Ben Sira quickly spread throughout Jewish life, and others expanded on it. The Zohar, a mystical work from 12th century Spain, imagines Lilith not only as the first wife of Adam but also as the wife of Satan. In the Kabbalah, Lilith takes on cosmic power. She is a chaotic counterpart to the Shekhinah (the feminine Divine Presence, the bride of the Infinite). In fact, the Zohar imagines that while the Jews suffer in exile, the Holy One (the masculine aspect of the Divine) separates from the Shekhinah, and consorts with Lilith.Lilith’s sexual-spiritual link with the Divine will only end when the Messiah comes and the brokenness in the world is mended.”
(9) Alphabet of Ben Sira, 23a-b; trans. Stern and Mirsky 1998, 183-184.
(10) Hammer, Rabbi Jill, “Lilith, Lady Flying in the Darkness,” MyJewishLearning.com.
__________________________-

Hey, my name is Scott Smith. I’m an attorney, author, theologian, and pro-life activist. I live in southern Louisiana with my beautiful wife and three wild-eyed children. We live between two rivers in our hometown of New Roads… Read more