I thought to myself, wow, Planned Parenthood actually had a great idea. Well, they had the inverse of a great idea, anyway. Pro-Lifers should have their own Holiday Guide to Dealing with Pro-Choicers! 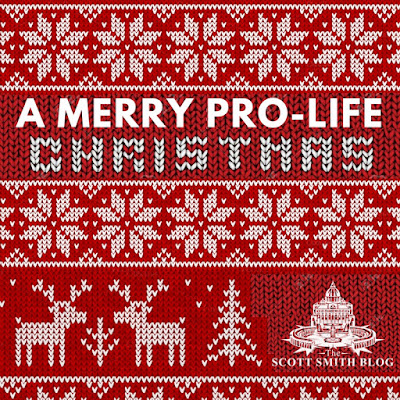 So, I reached out to some of my Pro-Life advocate friends and sidewalk counselors to see what they would include in such a guide, as well as rebutting what Planned Parenthood included in their guide.

SO WHAT WOULD A PRO-LIFE CHRISTMAS GUIDE LOOK LIKE?

Remember that, over and above the case you make, they are going to remember how you made them feel, and whether you spoke with compassion. This is perhaps especially true with it being the holidays.

If the situation is such that you can’t speak calmly, listen attentively, and have compassion and respect for all concerned (the woman, the abortionist, the baby, the person you’re talking to) then perhaps you should consider leaving the discussion for another time. [Cody & Mary Reed of Pro-Life Encounters]

(2) Be Prepared With a Brief Position Statement

Have a clearly articulated and brief summation of your view prepared. A great example is the 10 second pro–life position composed by Steve Wagner of Justice for All. It’s thought provoking and creates a great foundation for further discussion.

– If the unborn is growing, it must be alive.
– If it has human parents, it must be human.
– And living humans, human beings like you and me, are valuable aren’t they?
But that’s not the only way …
The pro-life position is that elective abortion unjustly takes the life of an innocent human being. This position is supported by modern science (showing that what abortion kills is a human being, a member of our species) together with a foundational moral principle (the equal fundamental dignity and right to life of every member of the human family).  [LifeSiteNews]
The science of embryology tells us that the unborn from conception is a distinct, living and whole human organism—a member of the species Homo sapiens, the same kind of being as each of us, only at a much earlier stage of development. This fact is uniformly affirmed by embryology textbooks and leading experts. [LifeSiteNews]
(3) Be Prepared To Answer Common Objections

What are the most common objections? Most common of all is likely the “back alley abortions” myth, i.e. that abortions will happen, whether legally, in a doctor’s office, or illegally, in a back-alley somewhere.
What’s the real story?
Claims by abortion advocates about the number of women who died from illegal abortions are wildly overstated, as NARAL co-founder Dr. Bernard Nathanson frankly admitted. According to the Centers for Disease Control, 39 women died from illegal abortion in 1972, the year before Roe v. Wade, while 24 died from legal abortion (abortion had been legalized in some circumstances in some states). Maternal mortality improved in the decades preceding Roe as a result of advances in modern medicine having nothing to do with legal abortion. [LifeSiteNews]
Here’s the deal …
If you cannot answer a challenge, don’t let it fluster you. Just be honest and say you will get back to the person after thinking and reading more about the issue. This opens the door to a long-term conversation, which actually might help your relationship grow.

Don’t be afraid to stir up controversy and tension. Negative peace exists when injustice happens but people are too afraid to confront the injustice out of fear of controversy.

Try to understand the motivation for their position.

It is most likely something that you can identify with (e.g. concern that women in crisis pregnancies be able to pursue their hopes, plans, and dreams).

Capitalize on that common concern. Bond over that, and from there discuss whether abortion moves us in a positive or negative direction (e.g. does it help women pursue their goals, or hinder them). [Cody & Mary Reed of Pro-Life Encounters]

(6) Find Common GroundPro-lifers and pro-choicers both want what’s best for women. Either “they’re baby killers” or “they just want to oppress women” are both extremist mentalities. Realize that MOST people just want to help people and you have common ground either way. [Louisiana Right to Life]
Here’s the deal:
It is so important to find common ground like this. Finding common ground helps everyone see that the other person wants what is best for the people involved and helps bridge the gap between the two sides. [Ryan Eyrich]

Make sure you’re not making assumptions about their position.

People waste a lot of time attacking positions that their opponents don’t even adhere to. Make sure you both are taking the time to understand precisely what you disagree and agree on.

You might be surprised by how much you have in common.

Make sure you are clearly distinguishing between the scientific, ethical, situational topics of the conversation.

When the life of a human individual begins is a scientific issue. It is factual, and should be discussed in factual terms.

The value of the unborn is a philosophical and ethical issue, and should be discussed in that framework. For those topics you can inquire about their position on the death penalty, on animal cruelty, etc. and find parallels to abortion.

(9) Compare To A Toddler

When faced with an argument or reason for abortion, ask yourself whether it works to justify killing obvious examples of rights-bearing human beings, such as newborn babies, toddlers, teenagers and adults. If not, it assumes that the being killed by abortion, the unborn (i.e., the human embryo or “fetus”), is not an intrinsically valuable human being, like toddlers and teenagers—that is, it simply assumes the very conclusion it must defend. [LifeSiteNews]

For example, a woman should not have a “right to choose” to drown her toddler in the bathtub. The question at hand is whether the unborn, like a toddler, deserves full moral respect and ought not be killed for the convenience or benefit of others. If so, killing the unborn by abortion, like killing a toddler for the same reasons, is a serious moral wrong. [LifeSiteNews]

Avoid the phrase “I believe that life begins at conception” like the plague. You don’t “believe” it. It is scientific fact.

Every time a pro-life person uses this phrase, they undermine the pro-life movement, and unwittingly assist the pro choice movement in portraying our position as a religious or ideological one.

Many pro choice people have been told their whole lives that the pro–life position centers around religious ideology. It doesn’t any more than opposition to slavery, sex trafficking, or child abuse. [Cody & Mary Reed of Pro-Life Encounters]

Don’t feel that you’ve failed if the person you’re talking to doesn’t seem convinced. Be a compassionate, respectful, and joyful representative of the pro-life movement, and leave them with things to think about. That’s how hearts are changed. [Cody & Mary Reed of Pro-Life Encounters]

ARE YOU STILL WONDERING WHAT THE PLANNED PARENTHOOD GUIDE LOOKS LIKE?

(12) Don’t treat the other side with contempt

Visiting family for Thanksgiving can be challenging. Your dinner companions may say hurtful, offensive things about race, gender identity, sexual harassment and assault, birth control coverage, abortion, or any number of topics — which can feel stressful, isolating, or enraging.

“Right off the bat, they’re presenting the other person in terms of contempt,” says Mary Reed of Pro-Life Encounters. The implicit statement here is this: people who are against abortion are also racist, homophobic, misogynistic, and sexually abusive.

“While other groups are saying that contempt is what’s wrong with politics today, that we should engage in respectful dialogue instead of demonizing each other,” Mary continues, “Planned Parenthood is here recommending that people treat their own family with contempt.”

NEXT, SEE WHERE PLANNED PARENTHOOD DEMEANS THEIR OWN PEOPLE

Here is Planned Parenthood’s first tips on how to deal with your family when things get hard:

1. Self care: Make decisions about what to do around Thanksgiving so you feel safe, whether that means not going home at all, going home with a friend or partner by your side, or only visiting for dinner.

2. Build allyship with family members who love and respect you: The more people in your family who can call people out (or even better, call people in) on their problematic behavior, the less acceptable it will be.

“Self care” is the first tip. Always think of yourself first, right? You have to do what’s important for you, first and foremost, not your baby and not your family – right? No, that’s how society falls apart. That’s how families fall apart.

“Not going home at all”?? This is insidious. Planned Parenthood knows that people who are isolated from their families are much more likely to get an abortion. Here, they’re actually encouraging the separation of families at the holidays.

“Call people out … on their problematic behavior.” Planned Parenthood’s next provides some strategy for creating family strife. “Allyship” is their way of saying gang up on the pro-lifers. Bully them, if you have to.

What else do you think should be included on this list?

Did this guide help you? Were you able to apply any of these tips?