A Pope and a President: John Paul II, Ronald Reagan, and the Extraordinary Untold Story of the 20th Century by Paul Kengor (648 pages, Intercollegiate Studies Institute, 2017) 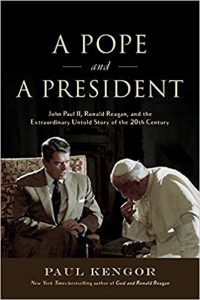 In Communism, the atheism is open, virulent, and violent.

In our own society, the atheism is hidden beneath a veneer of religiosity. Mixed into an increasingly diverse “spirituality” are various fragmented and seemingly unconnected ideologies. The fragmented ideologies are like the colorful shards inside a kaleidoscope. When you look through the peephole and turn the gadget, they seem to fall into place, shift and present you with a colorful and enchanting entertainment.

These various ideologies are forms of relativism which are atheism disguised. Among them are materialism, utilitarianism, scientism, and historicism. Each one of them is a form of atheism, and historicism is one of the most subtle and insidious. Historicism is the idea that there is no overarching plan to history. Although historians or theologians might be eager to imagine and impose a master plan, there is none. Your Sunday School teacher may have taught you that history is “His Story,” but the historicist chuckles at such naivety and insists that history is simply the sequence of random, interconnected events—a struggle for power among men and nations, ideas, and ideologies.

Paul Kengor’s excellent book A Pope and a President is bold enough to poke a pin in the pompous balloon of historicism. Dr. Kengor is an expert on Ronald Reagan, having authored, God and Ronald Reagan, The Crusader: Ronald Reagan and the Fall of Communism, and 11 Principles of a Reagan Conservative. His latest book chronicles the astonishing alliance between two unlikely friends: the Hollywood actor-turned-president and the pope from Poland.

Dr. Kengor charts the underlying similarities between the two men of disparate backgrounds. At their heart, both were deeply religious, mystics even. They were also athletes, actors, and natural communicators. At the foundation, both men had an inner simplicity and humility, believing against all odds that they had been chosen to fulfill a particular destiny. This belief in what Reagan called the “DP”—the Divine Plan—put them on a course of close friendship as together they set out to bring about the downfall of the “evil empire” of Soviet communism.

Dr. Kengor begins by reviewing the historical background of the communist ideology, and places the boyhood and growth of Reagan and Wojtyla in that context. He traces similar strands of influence in their formations—Reagan’s godly Protestant mother and Wojtyla’s godly father, their shared athleticism, nascent communication skills, and personal charisma. Eventually, as their two paths begin to merge, Dr. Kengor skillfully shows how a deeper, more mysterious plan was unfolding. While nations were striving against nations in war and political and economic battles, God was quietly weaving together another plan involving a young man from Poland and another young man from Illinois.

Between Reagan’s birth in 1911 and Wojtyla’s in 1920, the world was plunged into the first World War, and also during that crucial decade, the Blessed Virgin Mary appeared to three shepherd children in the Portuguese village of Fatima. Dr. Kengor weaves this event through the entire, fascinating story of Ronald Reagan and Pope John Paul II. If anyone held to historicism before reading this book, he would have to abandon his belief because the events of Fatima and the unfolding of the twentieth century prove that your Sunday School teacher was right. There is indeed a DP (Divine Plan). God was working his story out through the extraordinary lives of these two men who formed an alliance that brought down communism without bloodshed.

God’s way of working in the world is full of seeming coincidences, plot twists, and unexpected jolts. Reagan’s election at an advanced age could not have been predicted, neither could have the sudden death of Pope John Paul I, which thrust the young pope from Poland onto the world stage. Most dramatic, however, was the attempted assassination of both men. The assassins hit their targets just six weeks apart in 1981. Only now has it become clear just how close to death both the pope and the president really were. Both men attributed their survival to divine intervention, and turning their tragedies into triumph, the men developed a friendship, based on their shared conviction that God had spared them because He had a job for them to do.

Now, a decade or so after the deaths of Reagan and John Paul, the true connection between the Soviets and the assassination attempt on the pope has come to light. Dr. Kengor shows how the evil was planned intentionally and how the Soviets had clearly planned not only John Paul’s death, but that of Polish firebrand Lech Walesa. Dr. Kengor has spoken to the key players and done exhaustive research into the question, and one of the great highlights of the book is a statement by one Soviet operative, who admitted after the fall of the communist regime, “Yes. Reagan was right. We were an evil empire.”

My only quibble with Dr. Kengor’s book is that he did not investigate the background of the Reagan assassination more thoroughly. Why has the strange connection between John Hinckley’s family and the Bush family not been explored more completely? Was Hinckley really only trying to get the attention of the actress Jodi Foster? George Bush was vice president, and the fact that the assassin’s brother had a dinner date scheduled with the vice president’s son has been dismissed as a coincidence. Dr. Kengor does discuss the CIA’s attempted whitewash of the Soviet connection to John Paul’s attempted murder. Perhaps further investigation into H.W. Bush’s links with the CIA would have made Dr. Kengor’s book twice the length.

Tiptoeing around that conspiracy theory, Dr. Kengor does delve deeply into a kind of Divine Conspiracy theory. The attempt on John Paul’s life took place on May 13, 1981—the feast day of Our Lady of Fatima. John Paul believed that the Blessed Virgin Mary guided the bullet and spared his life, and he shared this conviction with the president as their friendship developed. Dr. Kengor traces the Marian connection throughout the book, showing how significant treaties, summits, conversations, and meetings repeatedly took place on dates connected with the Catholic Church’s celebration of the life of Mary.

Dr. Kengor’s book is extraordinary in that he is brave enough to trace the importance of religious faith in the story of communism’s downfall. So much reporting and historical writing ignores the importance of faith in world decisions, and yet there is invariably a religious dimension to virtually every news story and historical event. Dr. Kengor is to be congratulated for highlighting this vital strand in the extraordinary story of the pope and the president. The product is a historical tome that is not only detailed, informative, and educational, but also inspiring and encouraging.