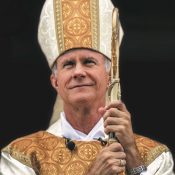 In paragraph 48 of the Dogmatic Constitution on the Church, Lumen Gentium (Light of the Nations), we read these words: “The Church, to which we are all called in Christ Jesus, and in which we acquire sanctity through the grace of God, will attain its full perfection only in the glory of heaven, when there will come the time of the restoration of all things. At that time the human race as well as the entire world, which is intimately related to man and attains to its end through him, will be perfectly reestablished in Christ.”

“Christ, having been lifted up from the earth has drawn all to Himself. Rising from the dead He sent His life-giving Spirit upon His disciples and through Him has established His Body which is the Church as the universal sacrament of salvation. Sitting at the right hand of the Father, He is continually active in the world that He might lead men to the Church and through it join them to Himself and that He might make them partakers of His glorious life by nourishing them with His own Body and Blood.”

“Therefore the promised restoration which we are awaiting has already begun in Christ, is carried forward in the mission of the Holy Spirit and through Him continues in the Church in which we learn the meaning of our terrestrial life through our faith, while we perform with hope in the future the work committed to us in this world by the Father, and thus work out our salvation.”

This understanding of ecclesiology (the theology of the Church) is taught in the New Testament and rooted in the early Church Fathers. To belong to Jesus Christ is to belong to His Church. There is no “church-less” Christianity. Jesus Christ is the Head of His Church. The Church is His Mystical Body. That phrase is placed in theological and historical context in an encyclical letter of Pope Pius XII which bears that name:

“ ‘He (Christ) is the Head of the Body of the Church,’ and the unbroken tradition of the Fathers from the earliest times teaches that the Divine Redeemer and the Society which is His Body form but one mystical person, that is to say, to quote Augustine, the whole Christ. Our Savior Himself in His sacerdotal prayer did not hesitate to liken this union to that wonderful unity by which the Son is in the Father, and the Father in the Son” (n. 67, Mystici Corporis Christi).

Through Baptism, we are incorporated into the Church. To belong to Jesus is to belong to His Church. To suggest otherwise rejects the clear teaching of the New Testament, the apostolic tradition, and the unbroken teaching of the Magisterium. Here is an example of this connection from the Acts of the Apostles. In Saul’s encounter with Jesus on the way to Damascus, we read:

“On his journey, as he was nearing Damascus, a light from the sky suddenly flashed around him. He fell to the ground and heard a voice saying to him, ‘Saul, Saul, why are you persecuting me?’ He said, ‘Who are you, sir?’ The reply came, ‘I am Jesus, whom you are persecuting’” (Acts of the Apostles, 9:3-6).

Saul was a known persecutor of the early Church when he heard Jesus ask that probing question “Why do you persecute me?” As far as we can tell Saul had never met Jesus Christ, at least during our Lord’s “earthly” ministry. Yet, so identified was — and is — Jesus with His Church that He asked this question of Saul. Saul’s experience became the framework for his continuing conversion and apostolic mission.

The Church is not some “thing,” outside of us, which we try to “fix” or have our “issues” with. Upon our Baptism, the Church becomes our home, our mother, the place in which we now live our lives in Christ. The early Church Fathers were of one mind concerning this truth. Here are a few short quotes which are representative of many, many more:

“No one can have God as his Father who does not have the Church as his Mother” (St. Cyprian).

How many Catholic Christians understand the implications of their own Baptism? How many have experienced the grace of identification with the Church as a “mother,” or the interior dimension of living in the Church as a “communion” of persons, flowing from the Communion of the Trinity? In its treatment of the nature of the Church in the Catechism of the Catholic Church (nn. 751-962), this paragraph stands out, citing numerous early Fathers of the Church:

“Christians of the first centuries said, ‘The world was created for the sake of the Church.’ God created the world for the sake of communion with his divine life, a communion brought about by the ‘convocation’ of men in Christ, and this ‘convocation’ is the Church. The Church is the goal of all things, and God permitted such painful upheavals as the angels’ fall and man’s sin only as occasions and means for displaying all the power of his arm and the whole measure of the love he wanted to give the world: Just as God’s will is creation and is called ‘the world,’ so his intention is the salvation of men, and it is called ‘the Church’” (CCC, n. 760).

In Catholic theology we teach the truth that the early fathers, saints, and councils throughout the ages have affirmed; to belong to Jesus Christ is to belong to His Body, the Church.

The Church is not Some-thing, but Some-One into whom we are baptized. The Head, Jesus Christ, cannot be separated from the Body. In this sense we now live in Jesus, and He lives in us.

This relational reality is why one of the preferred terms for the Church is communion, from the Greek “communio.” Joseph Cardinal Ratzinger, who we now know as Pope Emeritus Benedict XVI, wrote a wonderful book on this subject entitled Called to Communion: Understanding the Church Today. The Church as a communion is called to bring the whole world into the New World of the Church. The Church comes from above, it is an invitation into the life of God through Jesus Christ, a participation in the Divine Nature, that is instituted by the Lord, and to which we respond.

The Church is a relation, a “mystery,” in the sense conveyed by the Greek word “mysterion,” something which words alone cannot explain. Only an encounter will help us to enter its meaning. To come into a deeper awareness of the Church is an invitation into a relationship which cannot be fully expressed but is to be lived. That relationship is nuptial or spousal, it is the beginning of a call to be espoused to Jesus Christ as a bride to a bridegroom in the fullness of time.

The Church is the vine into which we are grafted, the new family begun at the Cross where we learn to love because we enter the very communion of Love which exists within the Trinity, through Jesus Christ. Birthed from the wounded side of the savior, the “New Adam” on the altar of the Cross, the Church is His Body and His Bride, now continuing His redemptive mission on the Earth.

In its treatment of the nature of the Church in the Catechism of the Catholic Church (nn. 751-962), this paragraph stands out, citing numerous early Fathers of the Church:

“Christians of the first centuries said, ‘The world was created for the sake of the Church.’ God created the world for the sake of communion with his divine life, a communion brought about by the ‘convocation’ of men in Christ, and this ‘convocation’ is the Church. The Church is the goal of all things, and God permitted such painful upheavals as the angels’ fall and man’s sin only as occasions and means for displaying all the power of his arm and the whole measure of the love he wanted to give the world: Just as God’s will is creation and is called ‘the world,’ so his intention is the salvation of men, and it is called ‘the Church’” (CCC, n. 760).

The early Christians would have never understood the notion, present in some contemporary Christian circles, that anyone could follow Jesus and not “need” the Church. To them we were reborn in the fount of Baptism as through a second womb. We live our Christian life now always as a part of the Church. And, we should long for that experience for everyone who bears the name Christian.

Catholic ecclesiology speaks clearly and simply concerning our Christian friends in other Christian communities, those who have been validly baptized in accordance with a Trinitarian formula, as already being in an “imperfect communion” with the One, Holy, Catholic, and Apostolic Church.

Catholics do not “re-baptize” a Christian from another community who chooses to come into the fullness that is Catholic Christian faith and life. That is, if they have already been baptized in the name of the Father, and the Son, and the Holy Spirit. When they profess the Creed and are confirmed; after they receive the Most Holy Eucharist, we speak of them as having come into “full communion,” because they are already, in a sense, joined to the one Church which is the mother of all Christianity.

In Jesus Christ, we are all invited into a participation in the very life of the Trinitarian communion. Every man, woman, and child on the face of the Earth is invited into that communion of love found in the Church in seed form and fulfilled in the Kingdom of God which is to come. Proclaiming this truth and demonstrating it by a different Way of Living are the mission and the message of the Church, and every one of her members.

Jesus Christ established a Church the fullness of which subsists in the Catholic Church. I will conclude, as I began, with an excerpt from Lumen Gentium explaining this vital truth with clarity:

“Christ, the one Mediator, established and continually sustains here on earth His holy Church, the community of faith, hope and charity, as an entity with visible delineation through which He communicated truth and grace to all. But, the society structured with hierarchical organs and the Mystical Body of Christ, are not to be considered as two realities, nor are the visible assembly and the spiritual community, nor the earthly Church and the Church enriched with heavenly things; rather they form one complex reality which coalesces from a divine and a human element.

“For this reason, by no weak analogy, it is compared to the mystery of the Incarnate Word. As the assumed nature inseparably united to Him, serves the divine Word as a living organ of salvation, so, in a similar way, does the visible social structure of the Church serve the Spirit of Christ, who vivifies it, in the building up of the body.

“This is the one Church of Christ which in the Creed is professed as one, holy, catholic and apostolic, which our Savior, after His Resurrection, commissioned Peter to shepherd, and him and the other apostles to extend and direct with authority, which He erected for all ages as ‘the pillar and mainstay of the truth.’ This Church constituted and organized in the world as a society, subsists in the Catholic Church, which is governed by the Successor of Peter and by the bishops in communion with him, although many elements of sanctification and of truth are found outside of its visible structure. These elements, as gifts belonging to the Church of Christ, are forces impelling toward catholic unity.”