Father George W. Rutler is pastor of St. Michael the Archangel Church in the archdiocese of New York. His Sunday homilies are archived. He has authored multiple books, including Calm in Chaos: Catholic Wisdom in Anxious Times and his latest, Grace and Truth. Individuals may donate to his parish.

Submit to the Holy Spirit, says unsung prelate-hero of WWI

On Sept. 10, 1919, Gen. John J. Pershing led his returning troops up Fifth Avenue before crowds numbering 2 million. In front of St. Patrick’s Cathedral, he dismounted from his rambunctious white horse “Captain” to greet Cdl. Désiré-Joseph Mercier, who had arrived in New York by ship the night before. The general made a point of expressing his esteem for the Belgian prelate. Perhaps the name Mercier means little to many today, but over the course of several weeks, he received an unprecedented series of welcomes in the United States, excelling even the welcome tour of Lafayette in 1824–1825. 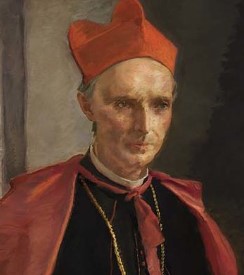 Cdl. Mercier wrote a pastoral letter that soinspired Belgians during WWI, the Germanarmy held him under house arrest

Cardinal Mercier had become a hero to the world for his defense of Belgium during its sufferings after the German invasion. It is edifying to read on the internet the account of the celebrations in America recorded by Fr. Thomas C. Brennan. In it, he describes the prelate addressing Protestant leaders in English, rabbis in Hebrew and academics in a Latin more fluent than their own, as they bestowed honorary laurels upon him.

This archbishop led a revival in studies of Thomas Aquinas, but more than that, he was an image of moral integrity, a cardinal honored more for himself than for his title. The response to the Donatist heresy established with certainty, through the articulation of such as St. Augustine, that the personal attributes of a cleric do not affect the legitimacy of his priestly acts; the sacraments of a weak bishop can confer the same grace as those of a saint. But the moral integrity of a cleric empowers his encouragement of souls. Weak leaders and their bromide-churning bureaucracies have scant moral influence.

The moral integrity of a cleric empowers his encouragement of souls. …