Cardinal Joseph Tobin of Newark, New Jersey joined a walk “for justice, for immigrants, and for all.” Chicago’s Cardinal Blase Cupich participated in a “peace walk” and praised anti-gun teenagers for giving “all of us a lesson in courage.” 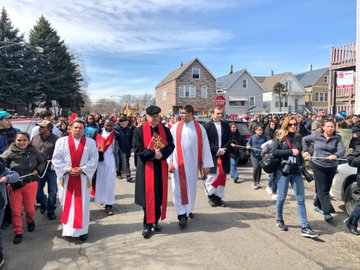 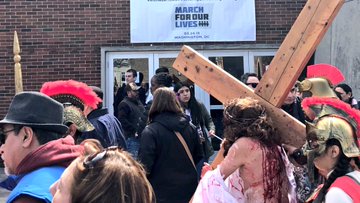 Cardinal Cupich on Good Friday marched through Chicago’s Brighton Park neighborhood, which suffers from gun violence, with Fr Manuel Dorantes and young people before addressing crowd in English and Spanish, exhorting them to continue fighting against gun violence.

The Chicago event also featured a re-enactment of the Last Supper and Jesus carrying and dying on the cross.

At the end of the route, a crowd of several hundred gathered in front of Immaculate Conception to watch a re-enactment of Jesus’ crucifixion. An actor portraying Jesus, wearing a crown of thorns and covered in artificial blood, carried a large wooden cross through the crowd. He paused for a moment under a nylon banner, with the March for Our Lives logo, affixed to the side of the red-brick church before taking his place on the cross.

Good Friday is the one day of the year when Mass is not offered. On Good Friday, “our worship is directed, not to the unbloody sacrifice of the Mass, but exclusively to the bloody but triumphant sacrifice of Calvary,” a 1962 daily missal from the Maryknoll fathers explains. 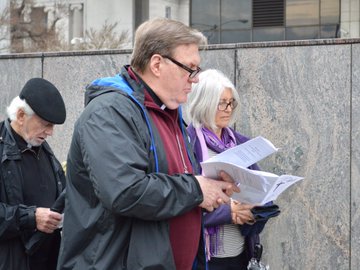 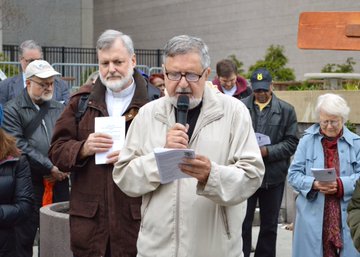 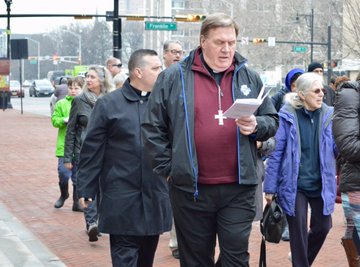 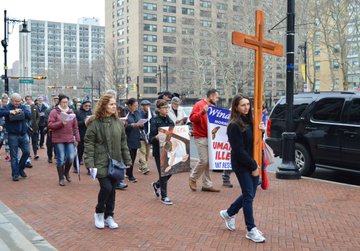 Earlier today in Newark, Cardinal @JoeTobin, together with fellow Catholics, participated in the “#GoodFriday Walk: For Justice, For Immigrants, and For All.”

Cupich frequently makes strong statements on gun violence and immigration. He imparted his blessing on youth from his archdiocese attending the “March for Our Lives” in Washington, D.C. last month. Planned Parenthood helped organize that march.

Cardinal Cupich  ✔@CardinalBCupich
I just landed in Rome, but know of my prayers for all students, teachers, parents and administrators voicing their support for stronger gun-safety laws today. Let us never walk away from our duty to keep our children safe.

Cardinal Cupich  ✔@CardinalBCupich   I’m at @stsabinachurch to bless Chicago youth joining the March for Our Lives in Washington, D.C. Let us listen to the voice of our young people and support stronger gun-safety measures.

The “March for Our Lives” generated fawning media coverage, a courtesy not extended to the annual March for Life.

Chicago’s murder rate is among the highest in the country, consistently putting it on lists of America’s most dangerous cities.

Tobin, who champions liberal immigration policies, made his support of anti-gun youth known during in March.

Tobin personally welcomed an “LGBT pilgrimage” to his cathedral in 2017, and recently found himself in hot water after tweeting, “nighty-night, baby. I love you.”He said that tweet was meant for his sister.