Most Amazing Things About the Rosary You Didn’t Know

The Message of Fatima, the Family, and the Crisis of Modesty I first learned about this special connection from one of my Scripture professors, and I have yet to see anybody write about it or even mention it since.

Inside the tent of the Tabernacle of Moses, there were three artifacts. There was the (1) Ark of the Covenant, which took the primary position, but there was also the (2) Golden Table of twelve loaves of bread and a flagon of wine and the (3) Golden Lampstand. The Golden Lampstand was the basis for the menorah.

These three artifacts have been considered Trinitarian in nature with the Ark of the Covenant bearing the Mercy Seat, the throne for God, the Father; the Golden Table with its bread and wine Eucharistically representing God, the Son; and the Golden Lampstand as the third member of the Trinity, the Holy Spirit.

But how does the Golden Lampstand represent the Holy Spirit, much less the Rosary? The lampstand is described in detail at Exodus 25: 31-40 RSV-CE. It has several branches, which are covered with “cups made like almonds, each with capital and flower.” 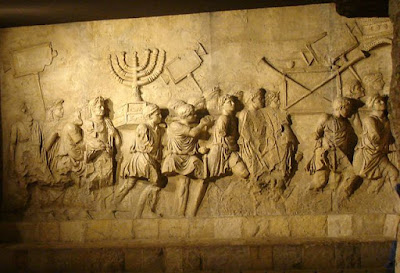 The lampstand also looks forward to Pentecost! Why Pentecost? When the lampstand was burning, all the “cups made like almonds” would be filled with burning oil. The lampstand, therefore, would be covered in “tongues of flame” just like at Acts 2:3, when the Holy Spirit came to the upper room like “the rush of a mighty wind” and “there appeared to them tongues as of fire, distributed and resting on each one of them.” The Apostles and disciples grouped around the Blessed Mother became a living lampstand!

In this way, the Church, too, is represented by the Golden Lampstand and the Burning Bush, as it burns but is never consumed, inasmuch as the “Gates of Hell” will never prevail against the Church. The “pure gold” of the lampstand is likely also a parallel typological basis for both the immaculate nature of the Church, as bathed in the blood of the Lamb, and the Immaculate Conception.

But where is the Rosary in all this? The Golden Lampstand is a depiction of an almond tree, as it is covered in almond blossoms. There is something special about the number of flowers on the golden almond tree. Though it’s somewhat difficult to gather from the text of Exodus 25, most ancient depictions of the lampstand includedfifty flowers. Where else do we find fifty flowers, in particular roses, linked together in branches? The Rosary! The decades of the Rosary, each containing ten beads, together account for fifty rose blossoms.

Amazing, right? Here are some more amazing things about the Rosary as told to us by authors and historians of the Rosary. Be sure to check out their books following the links below!

THE BOWL OF ROCKS

Patricia Kasten responded with the following amazing story about the origin of the Rosary. Kasten is the author of Linking Your Beads: The Rosary’s History, Mysteries, Prayers:

While the Blessed Virgin Mary gave Saint Dominic the connected beads which we know today as the Rosary, the Rosary is actually much, much more ancient. Kasten explains, “People may not know that the Rosary is descended from a bowl of rocks in the desert.”

“The Desert Fathers (and Desert Mothers), who lived as hermits in the third and fourth centuries, made a practice of praying all 150 psalms each day. To keep count, they used small stones, often kept in their begging bowls or a small bag. Saints Anthony of Egypt and Pachomius, both of whom lived in the fourth century, are credited with developing knotted prayer ropes to replace the rocks. These became the direct ancestors of the 150-decade rosary. Later still, the 150 psalms were replaced by 150 Pater Nosters, and even later, by the Aves.”

Many of us might complain – at least during our weaker moments – about the length of the Rosary. From Kasten’s account, however, you can see that the Rosary, as we know it, is a far abbreviated version. It used to be much longer.

So when did a “complete rosary” shift from 150-decades to 15 decades to a 5 decades?

“If I had to guess,” Kasten explains, “The three sets of mysteries – sets of mysteries also developed in other rosaries (6 – or 18 total – for the Brigittines and 7 joyful mysteries for the Franciscan Crown – developed in the way that other devotions did over the Middle Ages in Europe.”
So this brings up another historical “mystery”: where did the mysteries of the Rosary, the Glorious, the Sorrowful, and the Joyful, come from? Most people probably know that Saint Pope John Paul II contributed the Luminous Mysteries to the faith. The other sets of mysteries, however, are much older.
The Sorrowful Mysteries were likely the first to develop. “Since devotion to the Passion seems to have spread over Europe first,” Kasten explains. “It was the time of wars, the Crusades and plagues, and interest in the humanity of Jesus – especially his sufferings – ran high.”
This is also how we got the Stations of the Cross, Kasten adds. The Stations of the Cross were started by returning Crusaders. The First Crusade was fought between AD 1096 and 1099.
“Interest in the Sorrowful Mother followed this interest,” Kasten explains. “Then the joys of Mary, as seen in the Franciscan Crown of the 15th century, followed. And, of course, we can thank St. Francis in the 13th century for the focus on the Nativity.”
Kasten believes the Glorious mysteries would have developed last, since the Church’s full understanding of these, in particular the Assumption and Coronation of the Blessed Virgin Mary, developed later.

THE LAST MYSTERIES: ASSUMPTION AND CORONATION

Mitch Finley, author of The Rosary Handbook: A Guide for Newcomers, Old-Timers, and Those In Between, provides more insight into the last mysteries to develop.

“One of the surprises for me in doing the research to write The Rosary Handbook (The Word Among Us Press, revised/updated second edition, August 2017),” Finley recounts, “was the discovery that while the Rosary is clearly Christ-centered and scriptural, there are two mysteries that make the Rosary even more theologically balanced from a Catholic point of view, namely:  the fourth and fifth Glorious Mysteries, the Assumption and Coronation of Mary, respectively.”

These mysteries are not directly scriptural, Finley explains, though they do come from Sacred Tradition. “Thus, the Rosary reminds us of the ancient Catholic conviction that revelation comes from both Scripture and Tradition.”

If you’re interested in reading about the Scriptural foundations for the Assumption and Coronation of Mary, here are a number of articles I’ve written on the subject, as well as my new book and course: 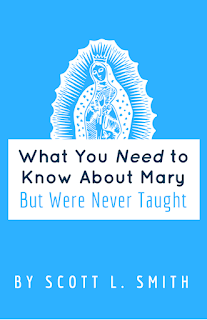 EXTRA: TO CAPITALIZE “ROSARY” OR NOT?

Mitch Finley also added a punctuation note on the Rosary. Is it capitalized or not? You can probably tell on which side of the line I fall, as I’ve been capitalizing “Rosary” throughout.

Here’s what Finley had to say on the issue, though:

The CNS style guide lower cases all uses of the word “rosary.”  Oddly, it upper cases “Angelus.”  I think this is nuts.  In my book I upper case “Rosary” the devotional prayer, and lower case “rosary” the beads, which I think makes more sense.

Sounds like the CNS style guide might have had some subversives within their ranks, trying to downgrade the Rosary with a lower case ‘r’!

I hope you’ve enjoyed this article on the Rosary (capital ‘R’)! Please don’t forget to share this article with your friends on Facebook and also to comment below. Thanks for reading!

Our Lady of the Rosary, pray for us!