Above, an artist’s conception of a night-time aerial view of the “Abrahamic Family House” in Abu Dhabi. Each building is dedicated to one of the three monotheistic religions: Judaism, Christianity and Islam 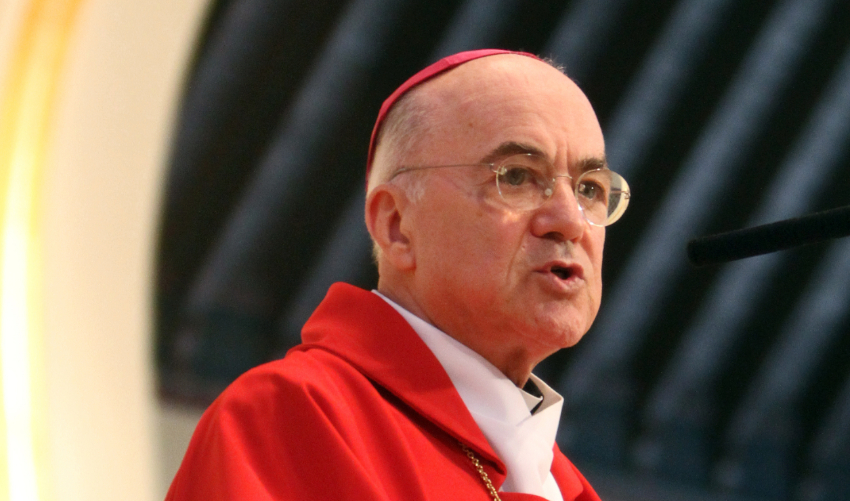 Archbishop Carlo Maria Viganò has published a new essay on an Italian website. Below an English translation

“The World Neo-Religion Will have its Temple”

Introductory note: Archbishop Carlo Maria Viganò, 78, has just published a brief essay via the Italian website “Duc in altum” (“Set out into the deep”), maintained by Italian journalist Aldo Maria Valli, a friend of the archbishop. (Link)

Archbishop Viganò, who is almost 79 and is retired from the Vatican diplomatic service, is living a quiet life of prayer in a safe place. He is studying the current issues facing the Church, reading articles and studying the recent history of the Church while immersing himself, through the breviary (the daily official cycle of Church prayer) in the mind and spirit of the Church Fathers. He has decided to write brief reflections on the issues of the day from the perspective of a faithful son of the Church. His desire is to explain and defend orthodox Church teaching because he is persuaded it is the way of salvation, that is, of human blessedness — human happiness — not of misery and the frustration of all human hopes — a blessing, not a curse. He feels called to offer these reflections, he says, because the power of secular thought today is so great that it is influencing many Church leaders, and ordinary faithful, creating confusion and opening the way to a loss of that faith which he, as a bishop, vowed to protect and defend. He hopes that his thoughts — offered as the fruit of his prayer and meditation — may help others to see more clearly the contours of the present battle — and the goodness of the Lord, who has called all Christians “out of darkness, into His marvelous light.”

Here is his latest reflection.

CM Viganò: “Thus the world Neo-Religion will have its temple. With the Pope’s approval”

Dear friends of Duc in altum , I received an article from Monsignor Carlo Maria Viganò that I gladly propose to you. It concerns the Abrahamic Family House project, a structure that will host a synagogue, a mosque and a church in Abu Dhabi. “In the garden of Abu Dhabi,” writes Viganò, “the Temple of the world syncretistic Neo-Religion is about to rise with its anti-Christian dogmas. Not even the most hopeful of the Freemasons would have imagined so much!”

“To the Venerable Brothers … who have peace and communion with the Apostolic See in the defense of the Truth revealed by Jesus Christ, health and Apostolic Blessing. Perhaps in the past it never happened that the heart of human creatures was taken as today by such a lively desire for fraternity… One easily understands… how many are those who yearn to see more and more united among themselves the various nations, led to this by this universal feeling of brotherhood. ”  ….